Generators.  Ugh.  When you are off-grid in Canada, you really do need to have experience with them.  I would love, LOVE it if I could easily find or make a steam powered version.  Now THAT is something I could get behind!

In the meantime, I have to make due with regular gas ones.  I’m thinking that gas is currently ubiquitous, and it’s easier to get it serviced locally (At KC Automotive down the road…).  We don’t need a huge one to charge our batteries here at the homestead – we are still pretty small and only use our electricity for the refrigerator, lights, water pump, washing machine, television screen, Internet, and charging electronics and batteries.  At least, in winter…  In summer when we can see that we have a surplus, we do allow ourselves the slow cooker on sunny days – that’s really awesome!

I do hope to double or triple our solar capacity in the near future, but for now, we make do with what we have.

Here are my experiences with generators so far.  This is just my experience, not any sort of advice or buying guide, although I may intersperse my discourse with my perceptions, rather than just my direct observations.

The first generator I purchased was a Champion 3000/4000 watt model from Canadian Tire.  It has good power available for charging, although I have noticed that it seems to only produce about half the rated capacity in each of the circuits it has for plugging in.  Thus you are more limited to 1500 watts on anything you wish to use.

This generator is still going for us – it has been down to KC numerous times for different issues – dirty fuel line, dirty carb, bad low oil sensor and most recently – bad spark plug.  K! reports that in his experience Champion generators just “wear out” after awhile.  I am okay with trying to keep this machine going, but I’ve learned that you cannot rely on it.

Which brings me to a thought – when I’m off grid and about to use the generator – it’s not because I want to.  It’s because I *need* to (usually batteries are down to 50% and there is no sign of solar charging in the near future).  This means that if the generator doesn’t go, we’re instantly in a serious pinch!  As such, it has led me to the unfortunate conclusion that in my present circumstance, we need to have TWO generators ready to go at any one time.

The next generator I purchased was a King Canada 950 watt model from Tool Town.  It was cheap – $150 on sale.  It was also a 2-cycle engine which I confess gave me pause while I thought of the environmental consequences.  It ran quietly and well for us for a few summer months, before the starting clutch self destructed.  I had it for repairs many times until it was finally replaced.  The new one ran worse, although it did start.  It is currently sitting in the back of the dojo tent, apparently in working condition (although I suspect only in 15+ degree weather, as I couldn’t get it to start last time I tried.)  I cannot, CANNOT recommend purchasing this generator.  There is even someone online who had one set itself on fire, in case you want something else to worry about if you decide to use one of these.

We relied on the original Champion 3000/4000 for the most part since we have been off grid, but about six weeks ago it quit just when the batteries were quite low, so I decided that in spite of finances, we needed to backup.  I dropped it off at KC and proceeded down to Wal-Mart where I passed on their cheapest 2-cycle option, and instead went for their 3250 watt option.

I have to say it wasn’t bad – it had wheels and and handle for moving, and it always started by the second pull.  My in-laws reported that it was noticably louder than the Champion, but from what I could see it was almost identical.  I figured it was, but just rebranded and in a slightly modified frame. 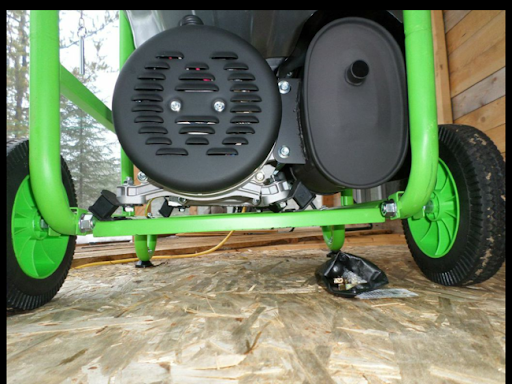 I went to do the first oil change, and that’s when I noticed that the aluminum strut from the generator to the frame was completely snapped off.  This was disappointing.  I loaded it up to exchange at Wal-Mart, but they didn’t have any other generators there, so I simply returned it and headed back to Canadian Tire to see what they were offering.

They had a model similar to my original on sale for slightly less than the Wal-Mart brand, and it got really good reviews online.  I purchased it and brought it home.  Loaded it with nice oil and started it up.  It worked really nicely.

Then it stalled again (for no reason).

Then it started to run pretty rough.

I was done with it for the day, and a few days later started it up again and left to run some errands in town. 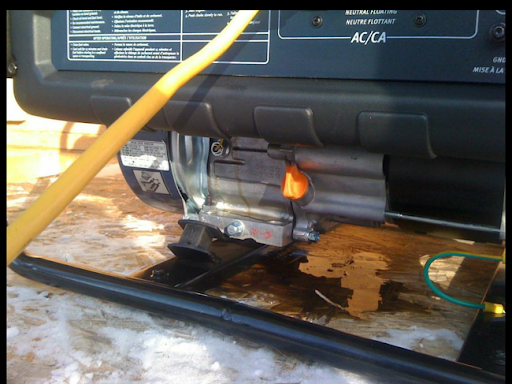 Donna texted me to report that the inverter/charger said it wasn’t producing any current, and then texted me soon after saying the generator was making lots of noise and smoke and an ugly liquid was running out of it and she was shutting it off.

While in town, I headed straight to Canadian Tire and bought their small Champion 1200/1500 watt generator.  I had eyed this model right from the start of our venture, but felt it may be too small.  It was on sale for only $200 with a 2 year warranty.  I figured that if I can actually get two years out of it, then it probably could be looked at as a “lease” that was within the budget.

I returned the other generator (which wasn’t Champion – it was Canadian Tire’s Mastercraft house brand).  They accepted it without complaint when I explained the multiple issues it has exhibited.  I’m not sure what was wrong with it. 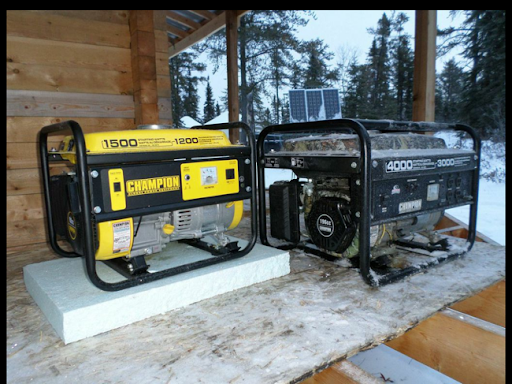 As an afterward, I do really like the new, small generator, but it isn’t without its own issues.  The inverter charger asks much of it to charge the batteries, and when the fridge kicks in, that can sometimes  cause it to fault out with an overvoltage condition.  This means we have to go out to the generator and unplug it and then plug it back in.  I’m not sure what the answer will be to this issue, aside from perhaps turning off the fridge for a few hours while we charge the batteries from the small generator.

Ultimately I would like to build a small generator “shed”.  I picture something almost like an old fashioned well – it would have a cover to keep the generators out of the weather, but still be open all around for good access and ventilation.  I could have both generators positioned together and simply alternate between the two for charging.

If I come up with any fundamental changes to my system or thoughts, I’ll try to note them in a future post.

2 thoughts on “Cheap Generators oh My!”