So a short while ago the fellow who built our roof and mounted our solar panels came back to squirt a little more foam insulation into a few voids that were developing condensation problems.

While here, I pointed out my construction techniques on my porch, and he thought it looked pretty good.  He did have one caveat though – if it had been him building it, he would have doubled up the supports at the outside edge of the porch roof.

This was something that I had originally put into my plans.  I even told myself that I would add this in the fall/winter when there was an actual snow load on the roof.  At the moment though, I’m not sure if I want to add this to the monetary or time budget.  Instead, I opted for another solution that just involved routine maintenance…   Keeping most of the snow clear!

Previously, I had used a long branch that Grandpa had rigged up with the end of an old gravel rake and a small piece of plywood wired to it.  This worked passably to clear snow from the dojo tent and the outside edges of the sauna porch roof, until it self-destructed.

I spend the remainder of the winter poking the dojo tent roof and yurt roof from underneath – VERY challenging work!  My shoulders were screaming by the end.  Then I stood on a step ladder and tried to use a snowshovel to clear snow from off of the sauna roof.  Not very safe (I recall actually falling off into the snow), and not very effective.  I wasn’t willing to actually step up on the roof with the snow there too, and no real, permanent supports in place.

In any case, this year I decided to bite the bullet and purchase one of those “angled snow shovels for pulling snow off the roof” – which it turns out has its’ own name – a “Roof Rake”.

I looked at pricing in the area; all were between $43.00 and $50.00.  Most of them had about 5′ or 6′ segments that you clicked together to get the length you desired.  Canadian Tire had a version with a telescopic pole that caught my eye, and it also was apparently better because the tube had an oval profile, which should lend it greater transverse strength.

I purchased that one, at about $46.00.  It was relatively easy to assemble, and actually using it was such a joy!  I was stunned with the ease of use and effectiveness.  I would certainly recommend one to anyone who has similar needs. 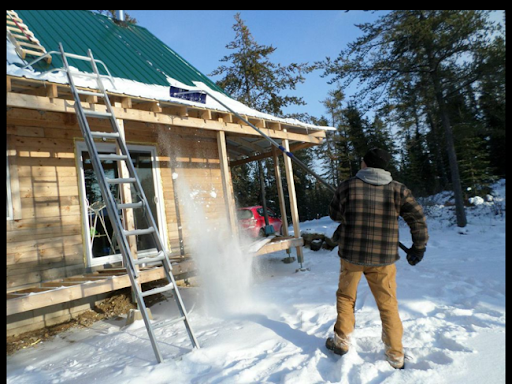 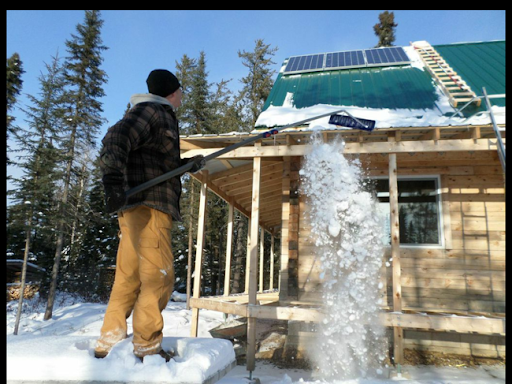 My greatest regret is that I didn’t buy it the first winter.  It would surely have prevented the collapse of the dojo tent – a tough, time-consuming tragedy.  I can say it has a real use here on our particular homestead.

2 thoughts on “The Roof Rake – an Early Review”