When the sauna and cabin were constructed, I wanted to ensure some cross ventilation in the crawl spaces, so I put in two vents on opposite corners of the sauna, and four vents in the corners of the cabin.

On Grandpa’s recommendation, I crawled under the buildings last fall and thumped some solid foam rectangles into the openings where the vents had been mounted.

This year I was less enthusiastic with crawling around down there again.  Besides, putting in the foam now, meant I *HAD* to go back down to remove it in the spring.

My best idea?  To mount the foam on the OUTSIDE of the foundation in the fall.  At the moment, for most spots, this meant I only had to straddle the open joists of the deck.  Even when I finally have all the deck boards down, I will only have to work my way across five feet of space to reach the vents, rather than crawling around under the buildings for many multiples of that.

I cut new foam blocks oversize to help ensure a good seal around the vents.

On top of the block walls I had set down some flashing which I bent downwards to try to discourage pests from climbing the blocks and getting direct access to the log of the cabin.  I had to bend up this flashing over the vents to be able to push the foam up more flush with the the top of the vents.  I put in a few screws right through the flashing and into the bottom of the deck joists to hold it in place.

Some scrap two foot pieces of wood mounted like a hinge allowed me to swing them up and apply pressure to the outside of the foam.  Another screw and a short length of string tied with a trucker’s hitch completed the simple device. 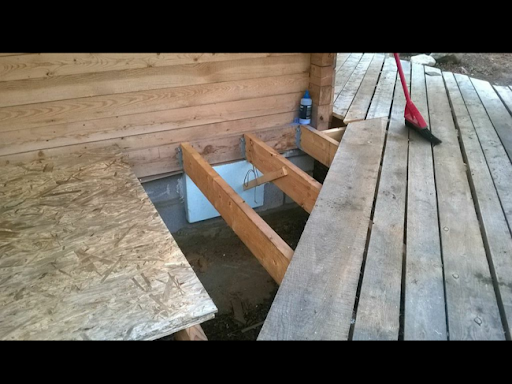 At this point I am pretty happy with the outcome.  It will be very challenging to try to compare the two options accurately.  Grandpa indicated that it was mainly to keep the wind from blowing through the bottom of the buildings during winter, and that even snow would have worked if we could have banked it up against the foundation once it had accumulated.  I trust that the porch roof and shovelling the porch itself will help to accumulate snow all around the cabin, at least in future when I have more porch to shovel :). 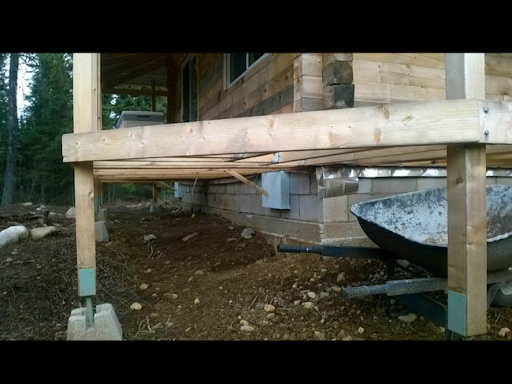 There was one vent on the sauna which did have full deckboards over it and required actually crawling under the deck to access and install the vents.  I was ever so clever, carrying over a scrap piece of steel that was propped up behind the woodshed – it was already five feet long, three feet wide, smooth and clean.  I slid it under the deck and gave myself a clean, comfortable (I put it under with the ribs facing down) workspace that caught dropped screws easily.  I will surely have to remember this trick for future reference.  It is much nicer than rolling around on the ground.