The sauna floor has progressively gotten more and more disappointing.  Finally with J! there, and the weather growing colder, I decided to address it directly.

There were two main issues to my mind.

The first was that in the washing  up room, water tended to flow past my floor drain and pool at the opposite end of the room instead.  As distasteful as the notion was, the only proper solution that I could see was to bend to the will of gravity, rather than fight it.  As such, I purchased the fittings to install a third drain in the sauna (one in the steam room, and two in the washing up room).

Cursing inwardly and warning my friend J! that I would be crabby for the duration, I slipped on my musty overalls and squirmed under the sauna to investigate my situation.

In short order I managed to cut in a hole to access the floor where I wanted the drain, and installed it with surprisingly little fuss.  It was a bit of a challenge to cut and glue and set up the ABS pipe underneath the sauna, but I had experience with this from all my adventures during last winter.

A new drain was installed in about an hour – not bad!

This led me to the second sauna problem I had to address – the floor itself.

Initially I had thought of treating the sauna floor with a product known as “Stone Effects”.  This is a sort of roll-on stone coating that looked to fit the bill perfectly.

While in the paint aisle, I happened upon another product called ReStore – a really thick, textured paint designed to go over wood and concrete, sealing it from the elements.  It was able to be applied in one or two coats and at a far better price point than the three step “Stone Effects” system.

At first it looked great, but after a short while, it began to flake off, especially in areas where the water was meant to flow.  Very annoying!  As time went on, it progressively became more and more gritty, until it was nearly impossible to clean, or walk on without feeling like you were just walking in dirt or (charitably) sand.  I took to wearing sandles at all times.

J! and his family graciously scraped off as much of this product as they could one day while I was away at work, but there were sections that stubbornly DID stay attached to the floor.

Donna and I then decided to apply Thompson’s Water Seal to the entire surface, and then perhaps hide it away under some rubber or plastic mats.

While installing the new drain though, I realized that the old drains were now slightly raised above the surface of the floor (they were flush with the ReStore flooring, which had flaked away around the drains, leaving them noticeably higher than the surrounding floor).

With much struggle, I realized that removing and reinstalling them flush was going to be a large undertaking.  Instead, I finally decided to copy Grandpa’s sauna – where he had mixed up a layer of concrete which he spread over all the wet areas of his building.

I headed off to town again (!) and returned the water seal product unopened, and left with six bags of parging mix. 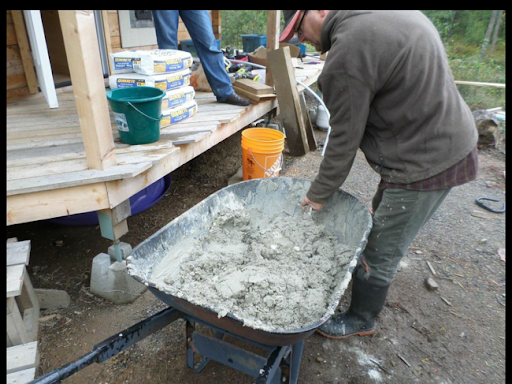 There was still plenty of day left, so I mixed them up in the wheelbarrow and J! and I set to work. 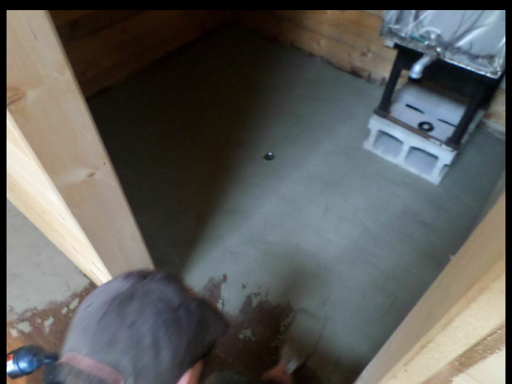 He tackled the corner of the washing up room, while I headed straight into the steam room.  It was a good job – I tried not to be too fussed on making it appear totally flat, just as long as it was smooth and sloped generally towards the drain. 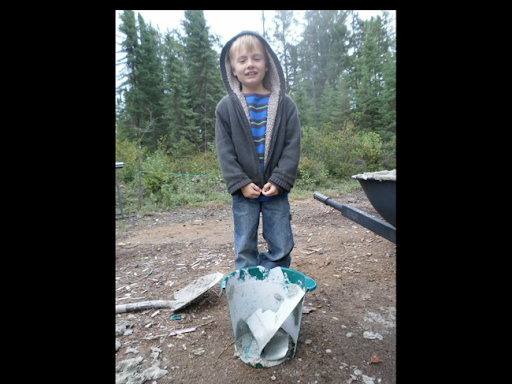 J! decided to take on a big portion of things, bigger than his bucket could handle.  This led to the incident. 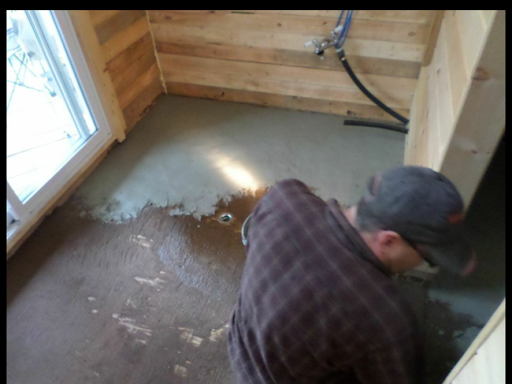 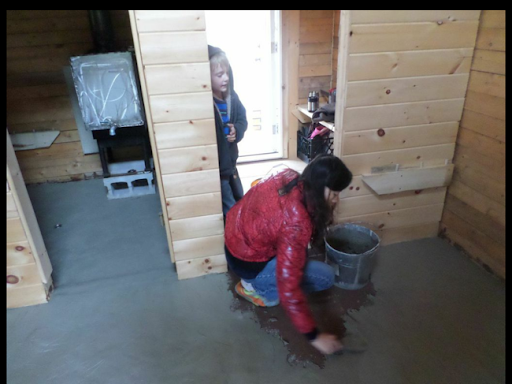 After a short while, J!’s wife, L! came out to ask if she could try.  Eventually all the kids took a turn, and then L! finished off the job by parging herself into the door frame.

It has been drying out for two days now, and hasn’t cracked during the drying process.  I will keep my fingers crossed that the floor is stable enough to keep it in one piece.  If not, I will likely have to patch it as needed, or perhaps silicone over any defects.  I also plan on looking into sealing the entire surface.

I can’t express enough thanks to J! and L! for their help on this!  It has been a real blessing to have them here this summer – they will be sorely missed when they leave for warmer climes.