As Donna and Kenny have been putting in the first baby-steps garden here at the homestead, I have spent a bit of time down there giving (often unsolicited) advice and just keeping an eye on the pond levels.

While observing the developing traffic pattern down there, I noted that Grandpa had recently leveled off a large circular area just off the path where last fall we had burned a large amount of brush we had cleared around the cabin.  I started to formulate a plan of perhaps someday turning that pre-burned area into a nicely cleared circle for a fire pit.  It was centrally located, sporting afternoon and evening shade, somewhat level, and very close to the pond for easy access to water.

I mentioned it as a passing thought only a few days ago to Grandpa, and lo and behold, yesterday he was game to get it done.

First though, he had to establish that his garden tractor could traverse the ravine.  He proved this easily first thing, with me following on my ATV, just in case we did need to use the winch.

With that completed, he then proceeded to shame me by hauling a load of gravel along the same ravine path, filling in low spots, all in the time it took me to simply rake out the leaves and clippings he had brought from his place as job number one of the day.

Then he hauled another load of gravel to where I had laid out the fire ring.  I made it in a large enough circle that the fire bowl would fit nicely, as well as lawn chairs that could be moved forward or backward to accomodate everyone’s preferences.

I tried to keep up with his shovelling on the next two loads, and eventually we got the main area mostly covered in a mix of clay and soil. 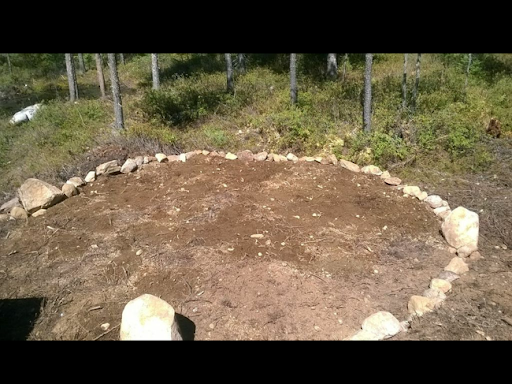 Grandpa then agreed to come with me down the road to a local pit to commandeer some more uniform gravel.  We loaded that up in a flash and returned to the circle before taking a break for lunch.

After lunch, Grandpa returned and we used the wheelbarrow to empty the truck and rake out a smoother surface.

I found last year’s fire bowl under the yurts, and set it up on some bricks in the centre of the circle.  I didn’t like the look of that, and it was really challenging to level.  Instead, I put the bowl directly on the gravel, leveled it as best I could, and then jumbled the bricks under it.  This still looked roughshod, so I found some larger, flatter rocks and piled them under the bowl.  When Mummu agreed that this looked good I knew I had a winning solution :). 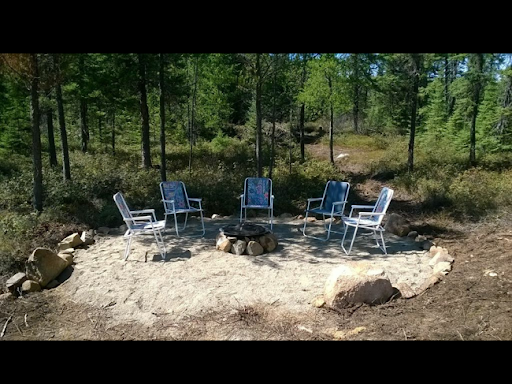 Now, we just need someone to come and share our fire and fellowship!

2 thoughts on “A Fire Pit for the Homestead”