It has been a slow start to spring here for sure this year.  My big project for the summer will certainly be getting the porches in a useable condition on both the sauna and the cabin.  These are predicated on me being able to dig down at least a short distance into the “soil” to put some sort of footings for the porch posts.  Right now it is easy to see that the ground is still quite frozen only a short distance down, as there is no shortage of standing water all over our property from the snowmelt.

Yesterday marked the first time that I could really begin to see some of my piles of scrap lumber appearing from under the rapidly melting snow.  With everything else looking muddy and wet, these piles especially stood out as looking untidy and keeping the whole homestead looking like a giant construction site.

At first I set up some metal sawhorses at the front of the homestead, where the dojo tent resides, and began cutting some of the slabs from my slab pile there.  Previously my father had been a huge help in processing these slabs and then moving them up to the cabin to burn.  I planned on cutting up many more, and by myself, so I opted to move them more efficiently than just having my father carrying bins of wood down the driveway.

Fortunately my trailer had melted out of the snowbank enough to be able to be hooked up.  There were two caveats – first, the tongue of the wagon was just a piece of square stock, with no hitch, and, worryingly, Grandpa and I had pounded it slightly flat when we first got it to get it to fit into the tractor’s simple pin hitch.  The ATV had a small ball hitch.  I purchased an inexpensive hitch for the trailer, but then Grandpa and I had to work at pounding the tongue back to a reasonably square shape.  With a bit of wailing using Grandpa’s heaviest maul, we managed to get the new hitch installed.  Then the second problem – the trailer had a profoundly flat tire.

I managed to pump up this tire, but then noted that it was badly split down one side.  Sigh, I hooked up the hitch (which was very, very tight the first time, but has loosened up with repeated use) and set off anyway.

As a test run before collecting my first batch of slabs Grandpa and I cut down a very, very dead jack pine between our properties and then I loaded it up and brought it to my splitting stump.  This worked like a charm, although backing up with the trailer on the back of the ATV was a bit of a challenge. 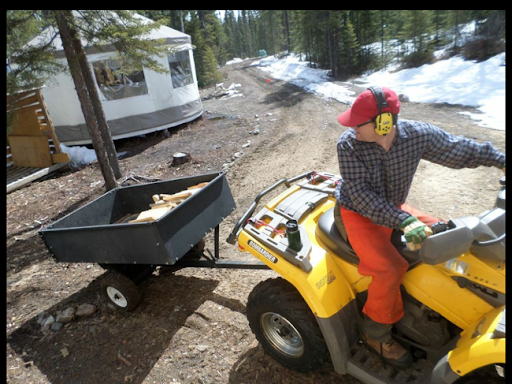 Next I did a load of slabs, and by this time the tire was pretty much fully deflated.  In the thin, soft layer of soil I opted to keep going.

As I unloaded the slabs, I noticed a pile of wood coming out of the snow just beside the sauna.  I decided that it should be my priority, as it was cluttering our actual living area.  So I emptied the cut up slabs into my main woodshed, and then backed through the water to the new pile.  With Kenny helping, we began to cut up and load wood from there.  I tried to note if there were nails or screws, and set them aside for more careful processing. 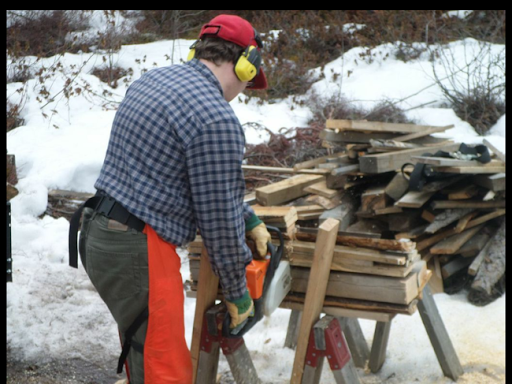 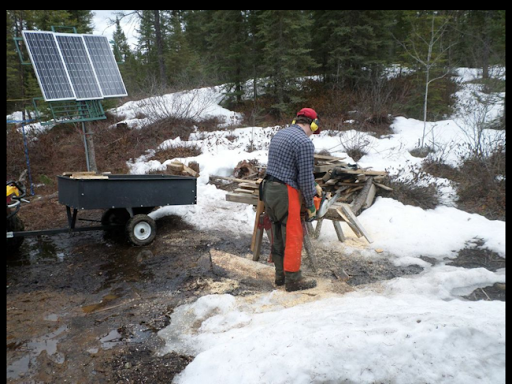 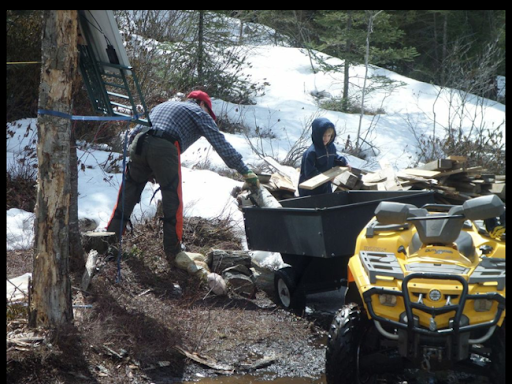 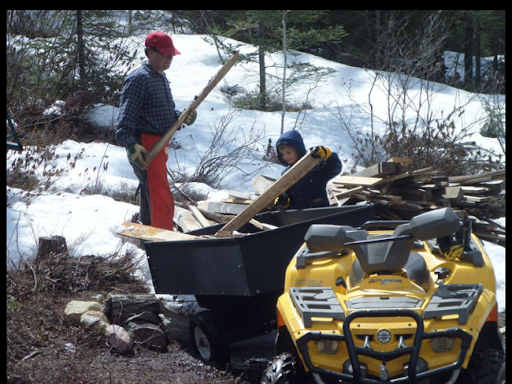 Of course, after only a short time Kenny and I came to blows and only a bokken / light sabre duel could solve our differences.  I ended up taking several blows to my backside and had to surrender. 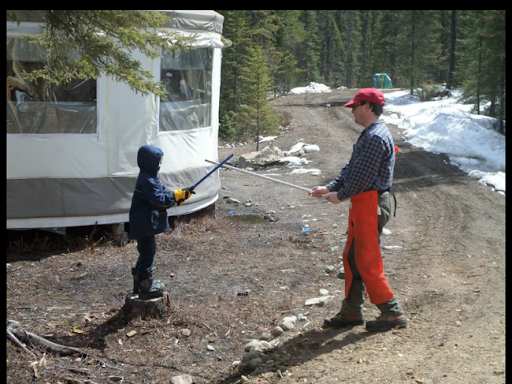 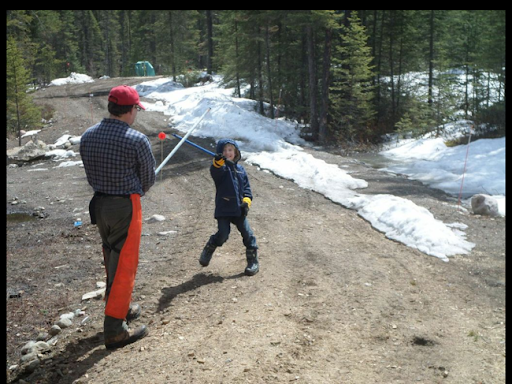 With him heading inside to celebrate with a victory candy, I continued well into the afternoon as Donna fired up the muchly appreciated sauna and did some laundry.  It was nice that she was handy with the camera to capture my horror as, after cutting up a bundle of slabs, I set the chainsaw down on a small workbench, only to hear it slide off and tumble into a deep puddle.

Crying out in despair and rushing back to the hissing, steaming, dripping saw, I made a priority of putting the bench on firmer, more level, and dry ground. 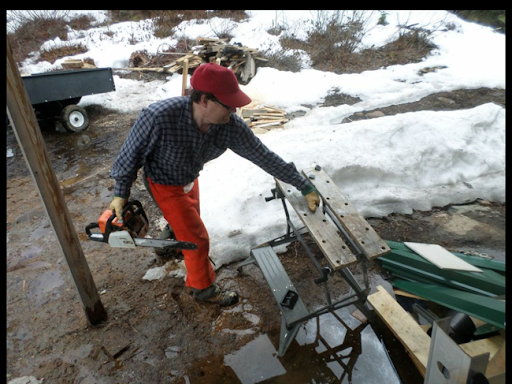 It was gratifying to be able to pile up enough slabs to cover an entire wall of the woodshed.  And this was without tackling the main slab pile – something that may have to wait until the weekend, as I’ve been asked to work for the remainder of the week.