Recently Donna and Kenny decided to take advantage of Mummu’s full size washing machine to make short work of the bedding.  Our little Panda washing machine, while it has endeared itself to me, still is rather limited with what it can handle in a single load.  I would say that it can only do one sheet at a time, and it best not be a very heavy one at that.

As soon as they left, I took a rather unsatisfactory break to gather my thoughts.

With the break over I decided I best have something to show for my time alone.  Just before the two of them had left, I had cleared under the bathroom sink to prepare to hook it up to the water line in place since the fall (when it had leaked many, many litres of water onto my floor, unnoticed during the night).

In the sauna, I turned the shut off valves on each tank, and then opened up the kitchen sink faucet.

Even so, I had to drain a little water into a basin as the bathroom sink is a few inches lower than the kitchen one.

Luckily, I had extra fittings from my failed attempts to have hot running water at multiple sinks.  In fact, the length of hose was pretty much exactly correct – serendipidous, as I was thinking I would have to cut it, and fearing it would be too short.

With a little manipulation, it slid onto the adapter under the taps, and this time I (correctly) double clamped it. 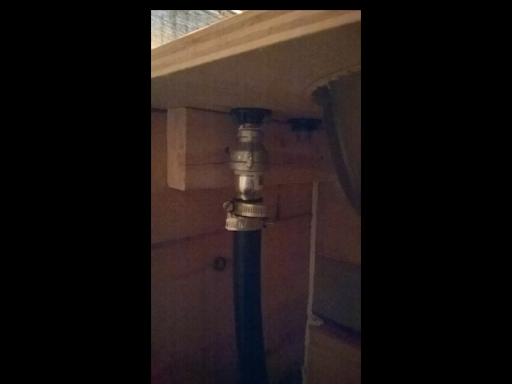 I returned to the sauna, turned on the valves, pondered pessimistically “what if it leaks and it takes me a few minutes to get to the cabin, and then a few more minutes to get back here to shut off the valves?”

For once, I needn’t have worried.  I returned to dry pipes, which gurgled and belched briefly when I turned on the bathroom faucet.  Suddenly – water!  I could wash my hands!  I could rinse out the toothpaste in the sink! 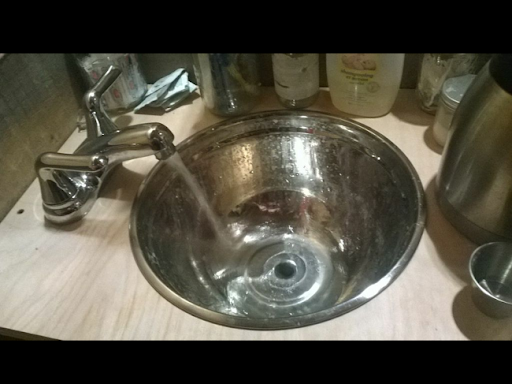 Once I fish some of the twigs and leaves out of the well that fell in while Grandpa and I were thawing the short section of line there, I will be prepared to use this water to also wet my toothbrush and rinse my mouth while brushing teeth.  I don’t see it to be much more hazardous than swimming in the lake at camp and getting some lake water in my eyes, up my nose, or in my mouth.  I *know* that animals are doing thier business (including a rather grisly death that Grandpa described last fall) directly in *that* water.  At least my well is filtered through a few feet of sand, and clay before that.

I plan on shocking the well with some chlorine once I get those physical objects out as well.  But then I think I will return to using the Berkefeld filter and will even contemplate drinking the filtered water, even if it comes back with bacteria reports.  I’m very tired of hauling water from the neighbours, no matter how nice the visit.