It’s an exciting time here in our cabin!

Nana and Papa are coming to visit for the first time since last summer/fall when our progress had only been to get the outer shell of the cabin up.

Papa had only just begun on framing the floor in the “kitchen” before they had to return to the south.

At least we got to see them again at Christmas, but it’s seemed like so long since then.  Thankfully we have gotten a chance to touch base by Skype and email and Google Chat, but there’s nothing like being able to have your family right there with you to share your time and space.

The visit of Aunt V! earlier in the year had gone really well (from our perspective).  She slept in Kenny’s room and with her bionic hip, had little trouble navigating the stairs to use the facilities at any time of day or night.

While I’m confident that Nana and Papa will also have no problems accessing all parts of the cabin, it was looking logistically difficult to fit everyone into the two working bedrooms we have now.

With that in mind, the load of fresh V-jointed pine that I was able to pick up on Friday was a timely arrival!

Grandpa and I got to it right away on Saturday morning, hoping to be able to enclose the main floor bedroom before my parents arrive this coming Thursday. 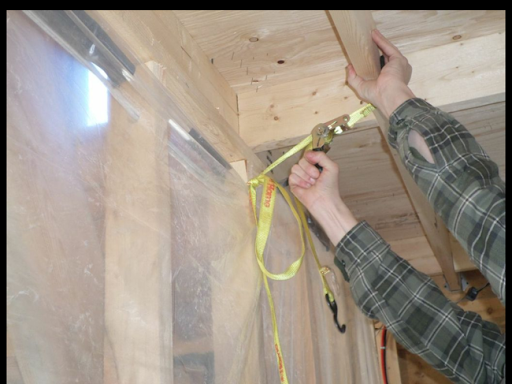 First up was ratcheting the wall into a more permanent position – it had taken a bit of a bend and the top was out by over an inch in the middle.  I will likely try to drill out and lag-bolt it into a more permanent orientation when I can get my hands onto some long bolts.  At this point, I think I will drill a hole in the top of the wall, and then put in a long lag bolt of a narrow enough diameter that it doesn’t actually grip onto the wall itself.  Then I will insert the bolt into the end of the floor joist above.  This will hopefully allow the loft to settle, without putting downward pressure on the wall.  Don’t worry, I’ll *try* to remember to take pictures of this scheme as I put it into practise, so you can understand what I’m on about. 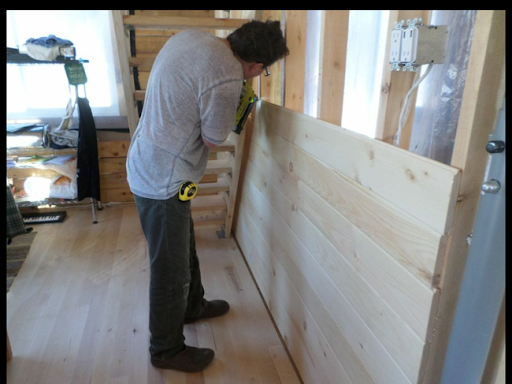 With the wall in position, and the sun already falling onto my panels enough to both charge them, as well as run the mitre saw, we were off! 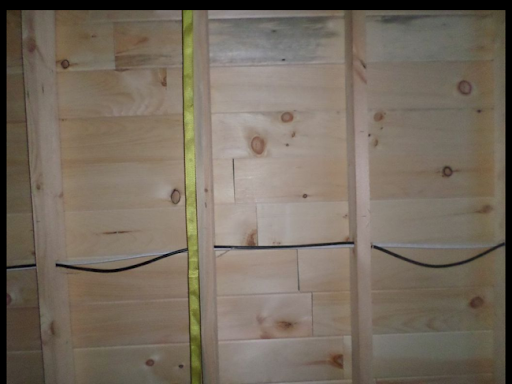 One complaint I had with our work upstairs was the butt joints of the wall boards had opened up a bit and it didn’t look as neat as I would have liked.  I want to try to find ways to avoid this from happening completely, and in this particular situation, I figured the best option would be to put all my joints behind the side support of the stairs, even if it meant that we couldn’t locate the joint on a stud.  My thoughts were that the run of jointed boards above and below the joint would still give it support and hold it in position.  So far, I’ve been vindicated.  The wall looks flawless, even though it was a few inches more than ten feet, and all my boards were in the eight foot range.

I’m not sure how I will hide my joints in the rest of the construction, but at least in this case, things worked out really well. 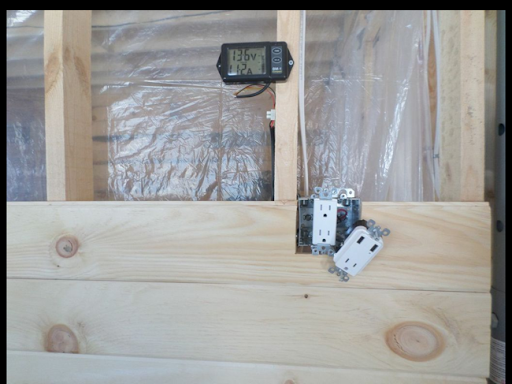 I cut out for my electrical boxes, and am especially enamoured with these outlets which include two USB charging ports as a replacement for the top half of the receptical.  We currently have two of them in the cabin and I am tickled pink with their usefulness! 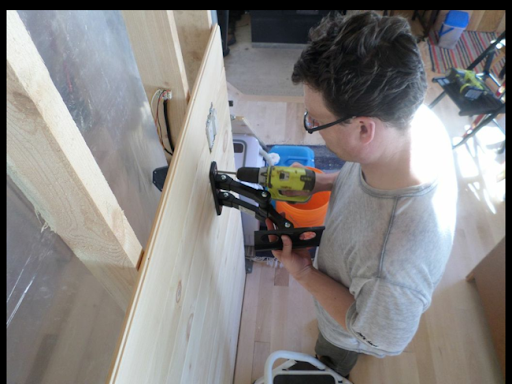 We can’t forget about the television mount – I took great pains to ensure it was level, but of course, once the weight of the television itself was on the end of the arm, it took up the slight slack in the arm itself to go just slightly off from level.  I don’t believe it’s noticeable to anyone but me, and considering how I had gotten use to the previous mount being WAY off, this will be totally fine. 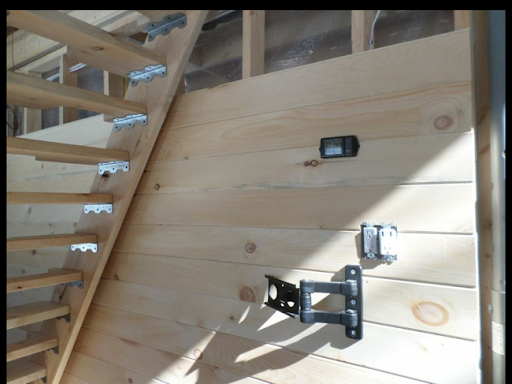 You can see how neatly the power meter fits onto the wall.  It even shows we are charging up the batteries at this point in the construction process! 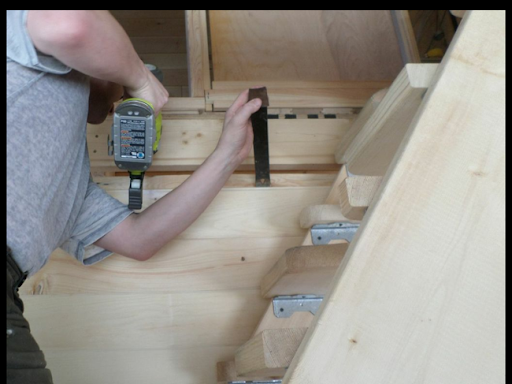 At the top of the wall, I wanted to really ensure the final board was nice and tight, so a little help from my pry-bar went a long way. 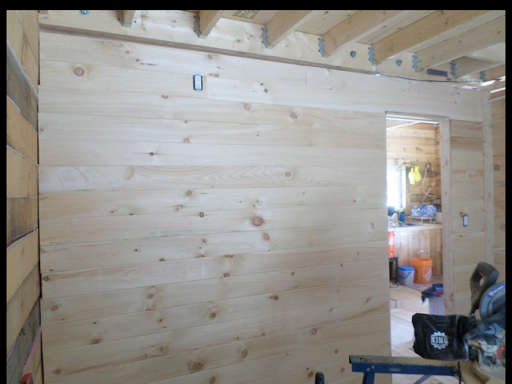 This was all accomplished in the morning, so when Grandpa returned in the afternoon, we were more than primed for the narrower wall on the other side of the room.  This one went up lickety-split.  It did have the slight difference in that it had the doorway in it.

The doorway meant that I installed the boards up the large side, across the top, and then a number of thirteen inch boards down the narrow side.  This went better than expected, and will surely be my new technique for this sort of situation.  I will have to research and think about how to do something similar around windows. 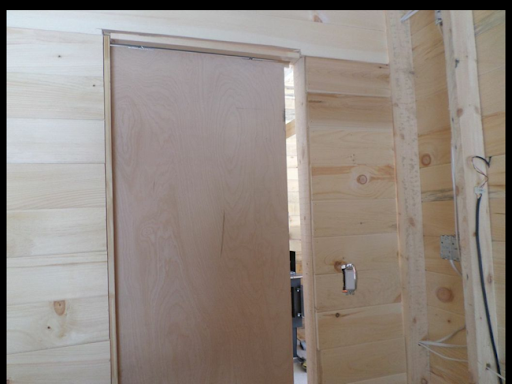 We now have an enclosed bedroom on the main floor!  I just have to clean up this room, and it should be close to fit for human habitation!

With a third bedroom prepared, now Nana and Papa can easily find their way to the facilities for nighttime trips, without fear of having to use my “unconventional” staircase.