Well, I mentioned that upstairs my floorboards had exhibited a little bit of “shrinkage” – gaps of a sixteenth of an inch have opened up between the boards in numerous places. 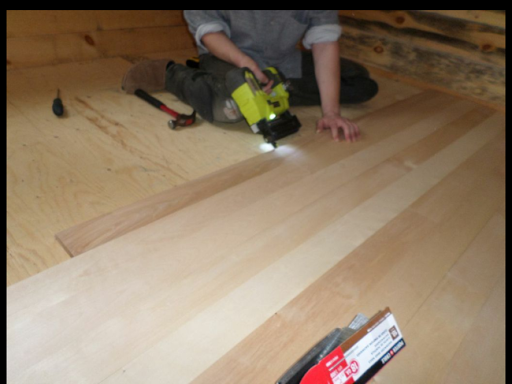 It was suggested that it wasn’t a case of the boards continuing to dry, but that I hadn’t nailed them down tightly enough.

I had never installed a floor before, and didn’t see it being that much different from other projects, so I installed the entire upstairs simply with my brad nailer.  Now I understand that there is actually a specific tool for nailing or stapling down a floor.

Don’t roll your eyes at me – I just didn’t even consider that there was a different option.

I’m not interested in pulling up the whole floor and re-doing it.  Not at this point anyway…  The boards have gaps, but they aren’t hideous or anything like that.  They aren’t rocking or sliding around.  I’ll let it ride and update my readers as to if they need further attention after I finish them.

By the time I was ready to move from the loft to the main floor, I had an offer of a loan of a floor stapler with a large compressor.  I readily accepted, even at the rental cost (one case of beer – and not cheap beer either!)

I headed out to pick it up that night, and of course, got our Toyota Echo stuck in their driveway.  At least they had a huge four wheel drive truck that was able to tow me up the driveway to the road, where I took a long drive in the dark through the back roads of the local townships.

Our lifestyle means that we don’t find ourselves out and about after dark very often, so it’s different driving when it does happen nowadays.  More often, I find myself in the dark when I’m heading to town in the mornings in the dead of winter, with sunrise still many hours away.

The next day Grandpa and I got ready to put the flooring down in the bathroom.  I plugged the compressor in and – beeeeeeep!  The inverter balked.  Sheesh, the compressor must pull down over 3000 watts of startup power?

I headed outside and started up the generator, then repeated my experiment… 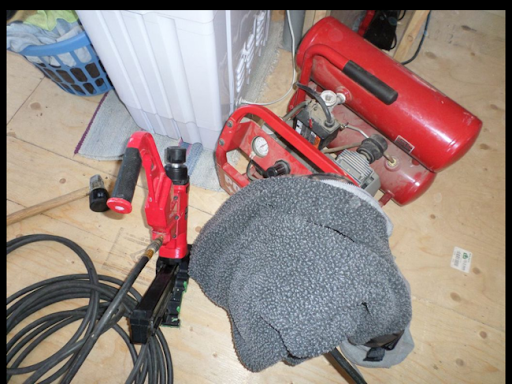 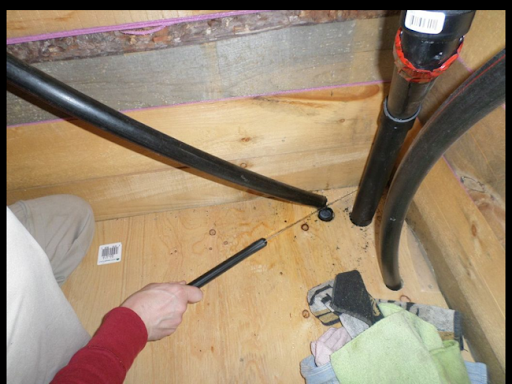 In the bathroom, I abandoned the notion of running hot water from the stove reservoir, so I cut off that poly pipe and installed the hardwood directly over the truncated pipe. 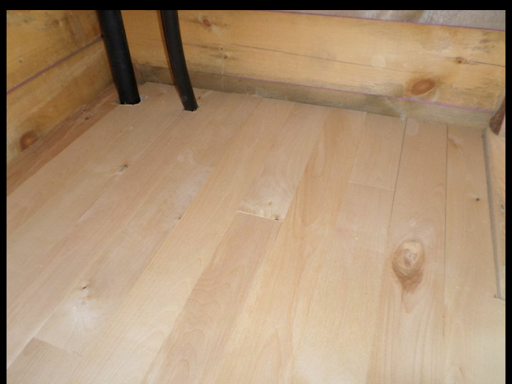 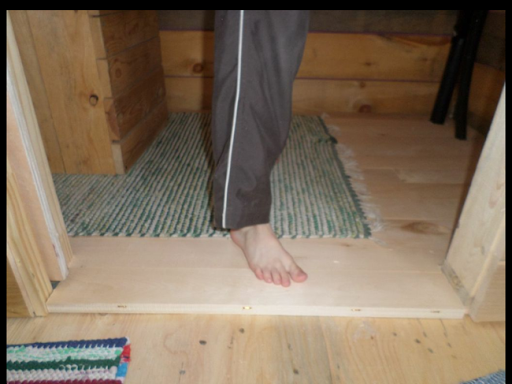 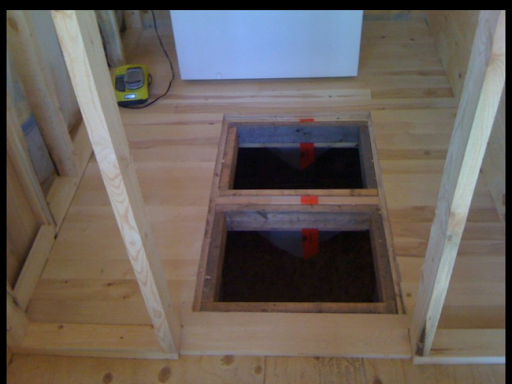 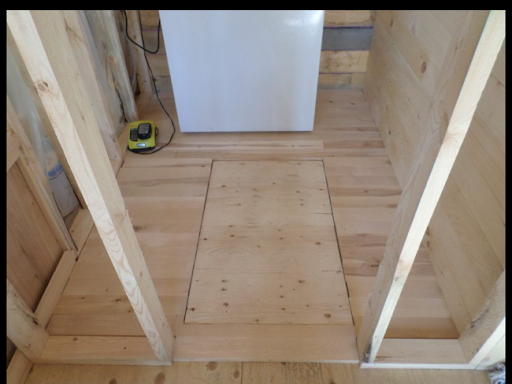 Grooooooaaaaaannnnnnnn!  The generator started to shake violently, but came into a sputtering level that managed to run the compressor until it cut off.  We plodded away like this for the day, finishing the tiny bathroom floor with the stapler, and then doing the pantry.

In the main floor bedroom, we had no such luck on the next day.  I simply could not get the generator to run the compressor.  It stalled every time the motor came on. 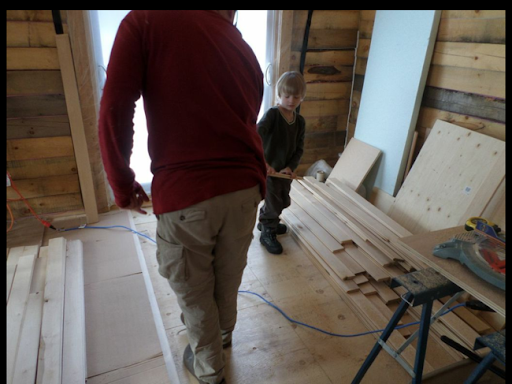 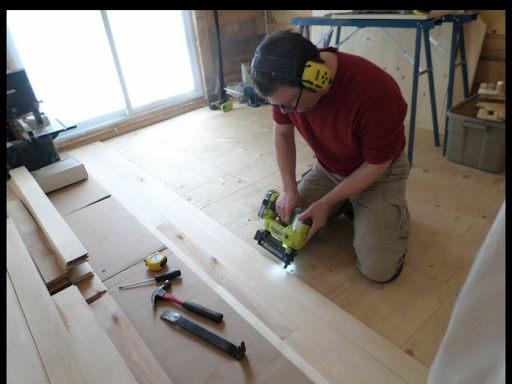 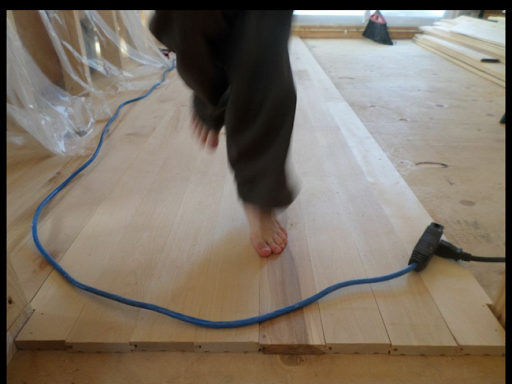 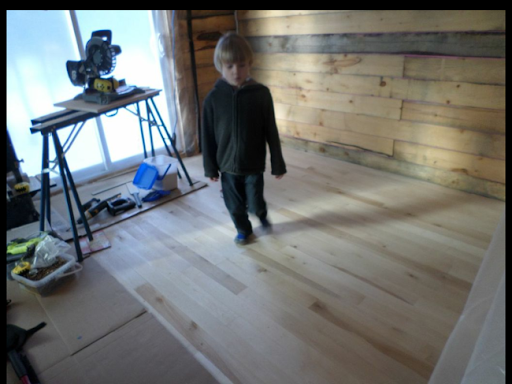 We completed the bedroom with a VERY generous helping of my brad nailer again.  I’m just going to have to see how this works out.  The ends of the boards I was able to nail directly through the tops for a pretty firm joint.  Elsewhere, I put in nails every five to six inches at the very most.

I decided that for the main part of the cabin, I wanted to try the nailer again.  So I purchased an inexpensive two gallon compressor from Home Depot at a really sharp price.  I’m sure it is very underpowered for a professional contractor, but I had their assurances that if it didn’t drive the stapler, I could return it.

At that price point, I would have accepted it blowing up after I installed the floor and just wrote it off as a consumable.  Anything it does after the floor will just be “gravy”.

I haven’t begun the main floor yet, I think I will try to focus on finishing the floors I already have done to confirm the concept. 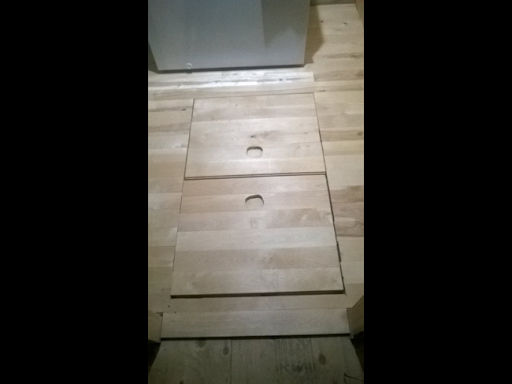 Just to test out the new compressor and floor stapler combination, I did finish off the trap doors in the pantry with the two items.  I believe it was about every five to ten staples that the compressor had to come back on to charge up.  This was reasonable to me.

It is nice that these smaller items run directly off my inverter and battery power.  I have realized that on a sunny day at this time of year, my underwhelming batteries charge up for nighttime very rapidly, and then a huge amount of potential power is wasted if I don’t use it.  So during the midmorning, Donna does laundry, we plug in lots of battery powered items to charge up, and just generally use our peak power.

I’ll try to update next on how finishing the bathroom and pantry go.

Here’s me playing with tilt-shift. 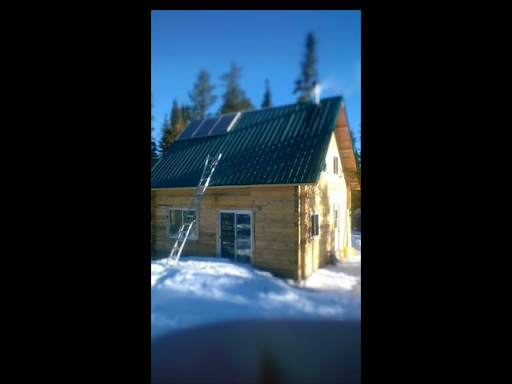