Having a drain in the kitchen sink is another luxury that we’ve rapidly become accustomed to.

For a few months, I simply had a bucket under the sink drain, and we tried to be mindful of how full it was at any given time before pulling the plug.  I managed to score the envious task of dumping out the “slop bucket” on a regular basis, with Donna filling in when I was neglectful of my duties.

Refurbishing the drain line from 1″ poly pipe to 1 1/2″ stiff ABS pipe sure has seemed to fit the bill for both our kitchen and sauna.  Last up – the bathroom. 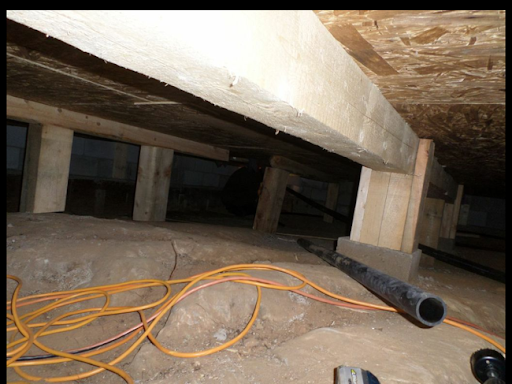 I coupled together two twelve foot lengths of ABS and with some finagling, managed to get them from one corner of the cabin (the bathroom) to the other corner (where the drain line passed through the foundation footing).  I cut my existing drain line, and inserted a Y adapter. 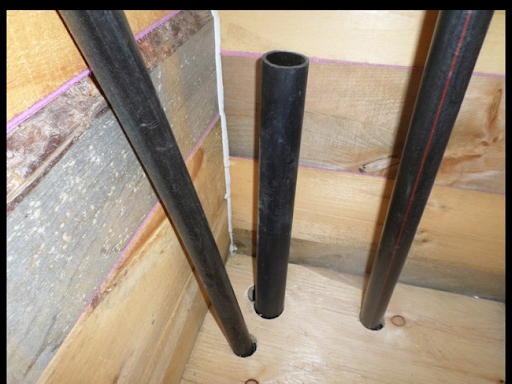 Then I had Donna press a two foot length of ABS through my newly expanded hole in the floor, until I was able to get it through into the crawlspace. I glued it into the new drain line, and then propped up this new line with the remaining six by six blocks that I had under the floor of the cabin.

Returning to the surface world, I cut down a piece of fancy birch plywood to act as a bathroom counter. 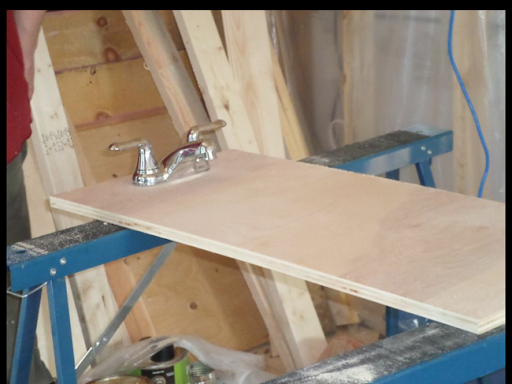 At one end, I drilled in the holes for my faucet.  While I don’t have running water to connect to the taps, I still wanted to ensure it was in an appropriate position for future use. 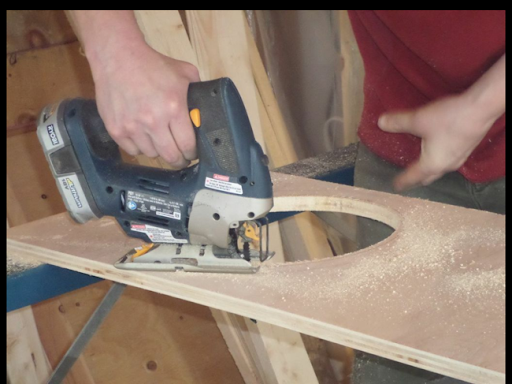 Due to our limited depth of counter and spacing, I opted to put the taps on the side of the sink, rather than behind it, as is generally traditional.

Next, I wanted to cheap out on buying a sink, as they can be rather expensive.

I also wanted something that would be slightly smaller than commercially available.

All this, and looking nice. 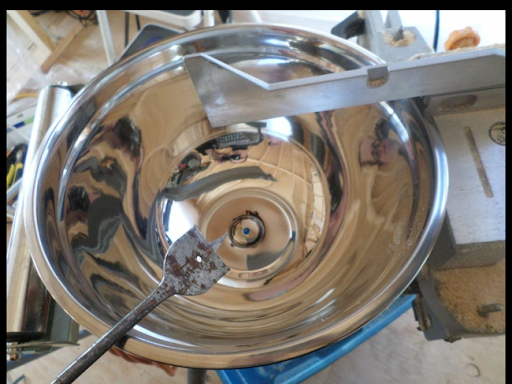 At first I tried to use my spade bit to drill out a hole in the bottom.  I was even willing to dull my bit and have to purchase a new one at the current price point of the entire sink assembly.

You can imagine my surprise at just how hard a cheap bowl can be compared to the teeth on a spade bit. It was no contest, as with a shower of sparks and smoke, the teeth on my bit disappeared into the ether. 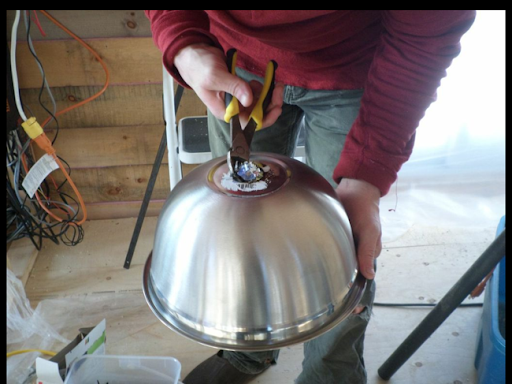 I switched to drilling a number of holes in a circular pattern, and then using my side cutters to nip out an approximate circle for the drain to be installed. 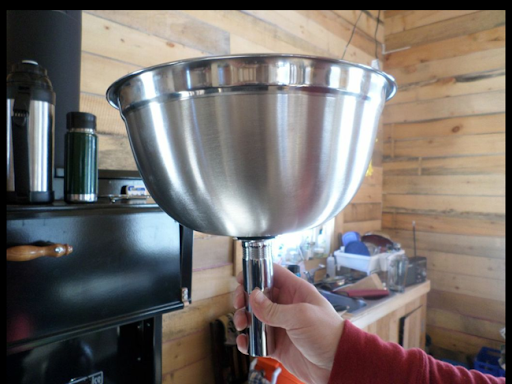 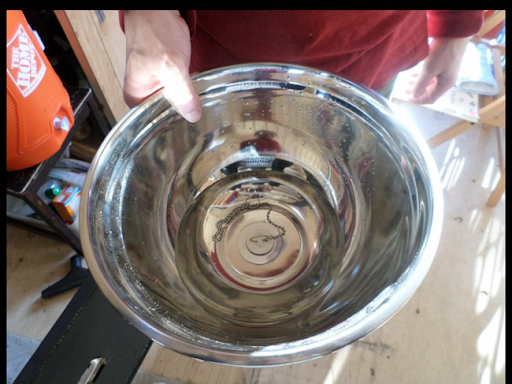 It passed the initial tests.  The only shortcoming at this point is that it had a circular “dimple” around the outside of the base which allows a ring of water to settle and not fully drain out. 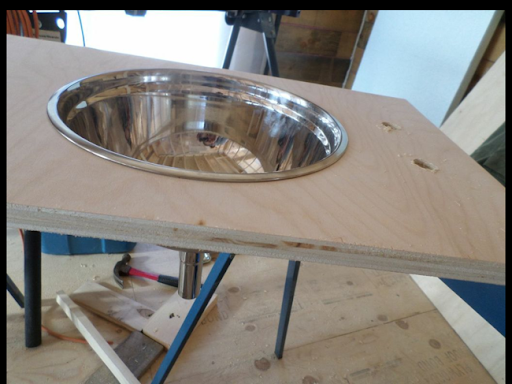 I installed the counter at what I thought was an appropriate height (three feet), but which is now feeling a little higher than normal for a bathroom counter.  We will try it out for awhile and see if we want it to be adjusted to our own personal preferences. 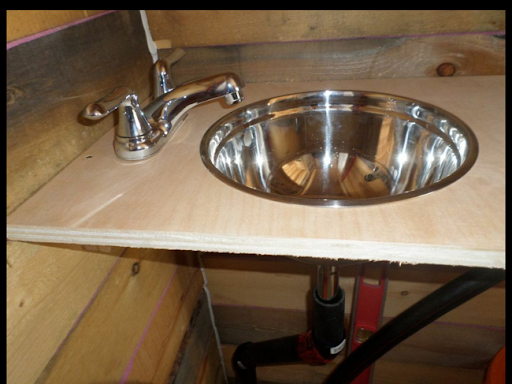 I dry fit the ABS up above the floor and simply lowered the sink drain down into the ABS pipe.  Things seem to work fine from that end, although I will surely want to find a clamp or fittings to make this an air and water tight seal at some point, likely shortly after a snake, mole, or mouse climb out of the space between the two pipes.

Finally, I pushed the faucet into position.  I wish I could find what I had done with the locking nuts that should hold it under the counter – if they don’t turn up when I come to plumb in the fixture, I guess I’ll have to improvise with washers and nuts. 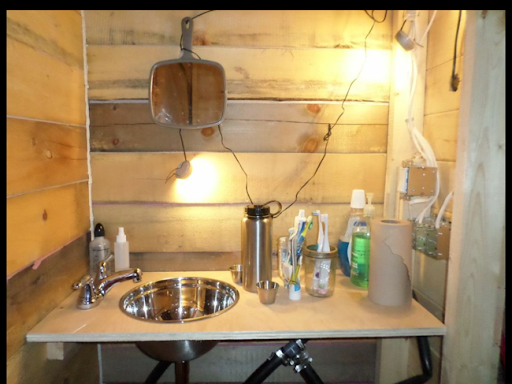 We moved our toothbrushing equipment into place, and last night christened the entire assembly with surprising lack of fanfare.  I guess we were all stuffed with Mummu’s delicious chili con carne.

Thankfully, no more wiping toothpaste out of the kitchen sink before doing dishes!