While I wasn’t especially trying to cut corners or build to minimums, I was trying to be mindful that space is at a premium, and so things like the thickness of the floors was going to directly affect the height of my ceilings.

With this in mind, I consulted carefully my building code books, and they suggested that two by six joists should suffice for a ten foot span.

In practise, this turned out to be inadequate in my opinion.  It wore on my nerves more and more to have Donna and Kenny walk past me, shaking the table and everything on it as if we were riding a train!

I began plotting to install a beam (or beams) in the crawlspace perpendicular to the floor joists, centred on the open space, reducing their span to about the four to six foot range.

I had a large pile of one to three foot long six by six beams left as off-cuts from building the cabin, so I was happy to use them as upright supports under the beams.

Serendipidously, I came into possession of four, four by four inch beams in the nine foot long range.

Grandpa came over to assist, and we knocked out the ventilation screen in one corner of the cabin to allow the beams to be inserted into the crawlspace.  I plan on also using this opening to insert the ABS pipe that will replace the bathroom drain line.

Grandpa slid in the four beams, and then waited outside while I set two aside for one half of the cabin, and two more in position under the main living side of the cabin (the south-west side).

I positioned the first beam, and then jacked it into position.  I took as accurate a measurement as possible and Grandpa proceeded to use my Stihl to cut a six by six to the proper length. 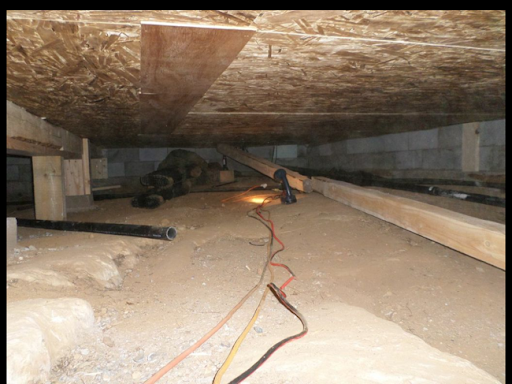 I jammed it under the end of the beam, and then moved to the other end with the jack to get ready for the next support. 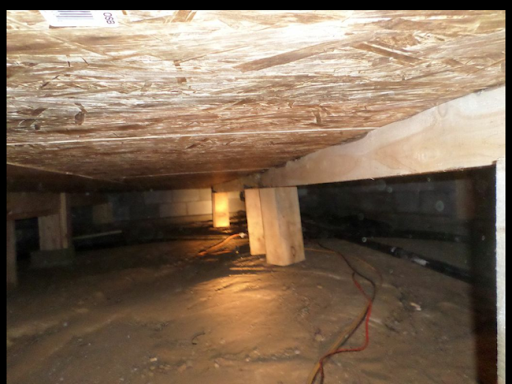 We repeated this process four times in all.  I butted the beams in the middle of the space, and then came upstairs to a delightfully solid floor. 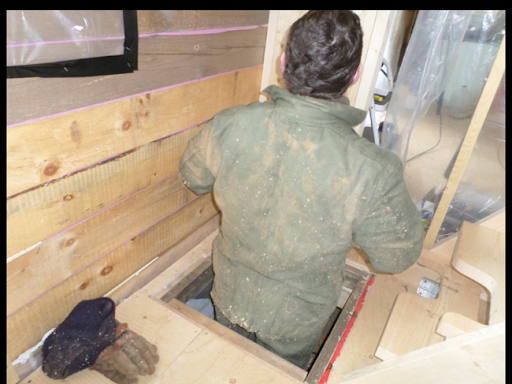 It was a rather dusty job indeed!

Grandpa was ready to go home to stoke his fires, so we held off on installing the other two beams for now.  I left the jack down below, and we’ll likely try to tackle this chore sometime this week.  I think I will try to also do the water drain line at the same time.

Strangely, in the loft we have the same span and two by six floor joists, but it doesn’t act as noticeably bouncy, so I’m not inclined to try to come up with any sort of solution at this point.  We’ll see if that needs to change in the future, but for now I’m happy to deal with things as they present themselves.