Ha!  The very instant I sat down to type up this blog post I got immediately distracted as a large Lynx just wandered past our patio door only a few feet away.  Donna and Kenny both were able to silently approach to get a good view themselves and we’re all excited to have had the chance to enjoy our first encounter through that view.

Immediately I retraced the prints of the lynx, and we saw that it passed directly in front of the cabin, including the kitchen window where Donna was busy cutting up some chicken for supper tonight – she’ll have to be less focused on her work in the future if she wants to catch these moments more often.

This title MAY be misleading, as I am only revisiting the thought of a winter road across the ravine, but recent events have made me a bit more optimistic about it.

A few days ago the temperature finally warmed up above the minus fifteen mark, and I felt that I had a fighting chance at getting the ATV going.  We have had very little snow since Christmas, and virtually none since I first purchased the ATV.  With no excuse to start it up, I found that when I actually wanted to put it to work, the machine was not interested in catching.  I eventually ran down the battery, and shelved the idea for another day or two, waiting for a chance to get to town to purchase some longer jumper cables.  Each vehicle currently has about a six to eight foot cable, but the ATV has a battery in the back, and I had backed her into the tent last time I had her out, so I couldn’t access the battery without combining cables, something I wasn’t interested in doing. 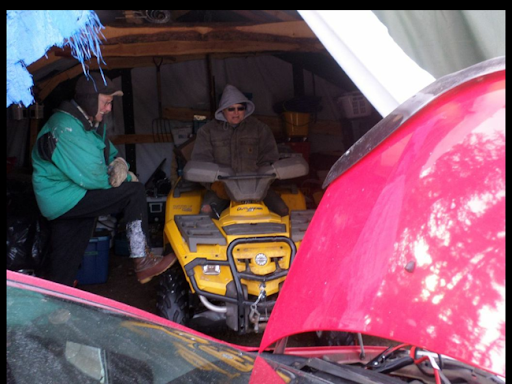 The local department store had a set of sixteen foot cables at a good price, so I brought them home and eagerly hooked up the ATV to our Echo.

It took many tries to finally get it to start.  My final success came by following Grandpa’s suggestion to turn the choke off, but then as soon as the engine caught, I turned on the choke until I found the sweet spot.

With the ATV running nicely, I opted to try to see if it could struggle its way to the edge of the ravine, an endeavour we had previously rejected when we got repeatedly stuck on the established path to the top of the hill leading down into the ravine.

In the two weeks following my adventures with the ATV getting stuck, I had continued to walk on the trail, noting that it seemed to be growing firmer and firmer as time went on.  It appears that while packing down the snow with my snowshoes isn’t immediately effective, after some further time passes, the snow “hardens” up significantly, and I shouldn’t lose heart so quickly.

This time I was able to take the ATV directly to my top of the hill turnaround without any problem and this really boosted my confidence.

I backed slowly down the path to the edge of the ravine, and then proceeded out about fifteen feet onto the ravine path without incident.

I was pumped.  If I didn’t have an alternative mission, I would seriously have considered trying to go right across the ravine and then follow the ravine path.

Instead, Grandpa showed up with my bucksaw and Fiskar’s splitting axe and proceeded to fell one of the dead but standing spruce trees in the ravine. 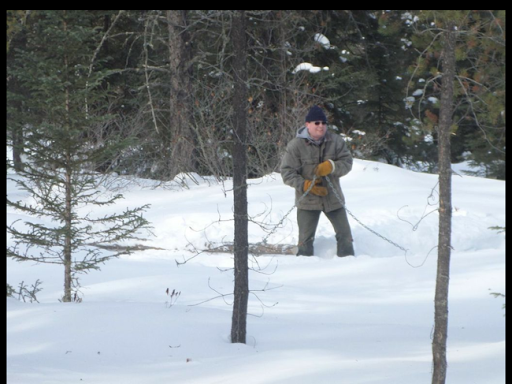 After dropping the tree and helping me to buck it, I chained it to the ATV and handily dragged it back up the hill to my wood processing area.  I was really tickled.

Taking his leave, Grandpa headed back to his place to stoke his fires, and I returned to the edge of the ravine to haul out the next tree.

This time I was a little more careless, and on the way down backed off the path and got stuck.

The winch made short work of that situation, but I still got stuck two more times before I managed to find a firmly packed path to the edge of the ravine.

I cut down the next tree, slightly larger than the first, and decided to haul it out in two trips.  The first one went uneventfully, but the second time the ATV was no longer able to gain traction on the hill out of the ravine where I had torn up my path noticeably when I got stuck those three other times. 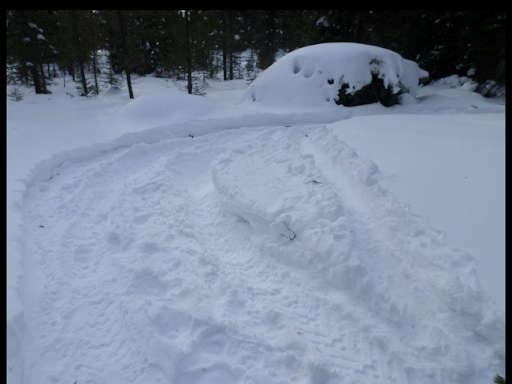 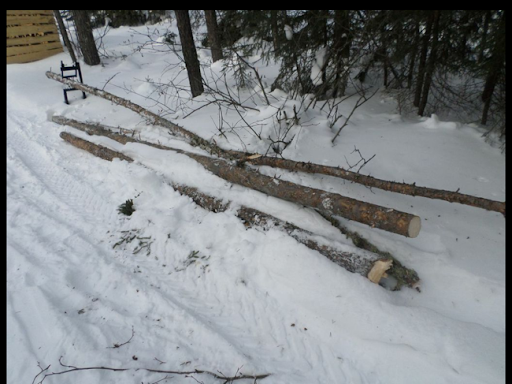 By this time I had had enough for the day.  I was excited and humbled at the same time.  I am hoping that after another few days the trail will firm up again and perhaps even the places where I slid off will also become less treacherous. 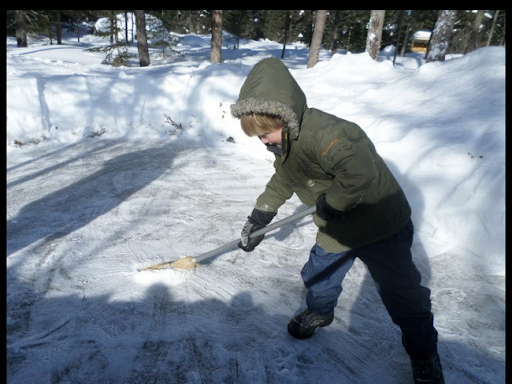 I headed back to the cabin, taking a detour to our pond when I saw Donna and Kenny shovelling off the ice in preparation for a visit from Aunt V!.  We are so excited to host her and make her part of our household, if only for a longish weekend.  She’s always fun and a great role model for Kenny.

I pulled Kenny along the entire snow road on our sled to help smooth out the ruts and pack it further.  He took one spill and laughed through a faceful of snow.  We certainly earned our hot chocolate that day!