I was very enthused about how well things had worked out finally in the sauna, through the combination of updated drain lines, as well as the new technique of ensuring that water wasn’t “trickling” through the pipe for hours after the sauna had been finished.

As such, I picked up three more twelve foot lengths of the inch and a half ABS pipe and enough couplers and fittings to allow me to do a similar update in the cabin.

Early the next morning, I suited up and headed outside, where I used the snow shovel to dig out the corner of the cabin in the approximate location of the existing drain lines.  Once I got down to the frozen earth, I headed over to Mummu and Grandpa’s to borrow Grandpa’s pick axe.

Grandpa suggested using his grubbing axe instead, and that he would deliver it personally.

With him doing most of the grubbing, he dug out the drain lines and I went down under the cabin to cut off the poly pipe drain and get ready to put together the new line.  I took down the ABS cement – unlike in the sauna, this water had the likelihood of being smelly and dirty – and so I wanted there to be no chance of leaks.

I cut off the existing line, and noted that it was still frozen even up close to the floor.

Donna delivered a thermos of steaming hot water, which I soaked the end of the drain in until I noticed that there was more water running out of it than could be explained by melt.  Suddenly, a large gush of (nasty smelling) water flowed out as the drain finally emptied for the first time since late November, early December.  YUCK!  I rolled around in a stunted attempt to stay away from the ever growing puddle under the cabin.  Luckily it was only a small amount of water, and the flow stopped quickly. 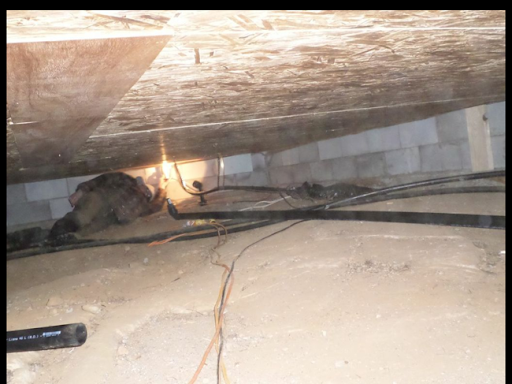 Grandpa heaved the first length of pipe through the foundation, and I pulled it completely inside and set it aside, realizing that two lengths should be sufficient.  This length I would employ later to drain the bathroom.

The next one I had him shove in as far as where I was stationed, then I glued on the adapter to convert it to my poly pipe.  With that in place, I helped him guide it inside and glued on a coupling.  He then rammed in the final piece and I glued it to the second one.  I dragged myself over to the stub of poly pipe still dripping under the kitchen sink, and bellowed for Grandpa to shove in the last of the pipe.  Calling out the feet and inches remaining, we finally had everything lined up perfectly, and I, for once, remembered to slide on the pipe clamp BEFORE connecting the pipes.  I guess after a hundred or so connections, one finally learns.

The hookup went smoothly, and I headed back to the trap door at the bottom of our stairs and climbed out, dusty and aching, but otherwise excited.

I headed under the kitchen sink and reconnected the drain line there to my satisfaction.

With that done, I checked on Grandpa, where he was trying to ensure a good trench from the end of the pipe to the slope beyond the cabin.  We hummed and hawed for awhile, convincing ourselves that the water would “never” be able to freeze and backup that far.

Meanwhile, Donna had completed a load of laundry in the Panda, and so had a bucket of room temperature, dirty water, waiting for me to carry out and dump.  I was ever so clever, and just dumped the whole thing down the sink with mounting fear that perhaps I could have tested my system with less than twenty litres of water.  Oh well, in for a penny, in for a pound.

I didn’t hear anything from outside, so I rushed out, calling to Grandpa repeatedly “do you see anything?!”. 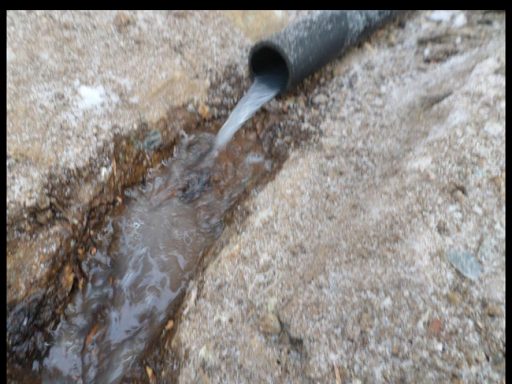 Finally, when I got right beside him, he said “yeah”, and there it was, delightful water flowing out!  And when it finished, no drip, drip, drip to freeze up! 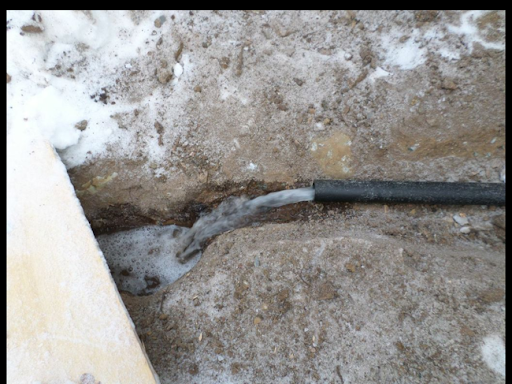 That is one blessing of the way water in the cabin will likely be used – it will generally be room temperature or warmer, and when it is sent down the drain, it will be as a single gush, not a steady drip.  As such, I am even more optimistic in it not freezing up.  Of course, it feels like I’ve typed these sentiments a hundred times before in previous blog posts.  It is with sincere hope that I record these failures so anyone else can avoid them by learning from my trials.  Actually, that’s one of the big reasons I’m writing this whole blog!  So that anyone who comes later can see what did (or more likely, didn’t) work for me.

In any case, as I write this, it has been a few days of unmonitored usage of the new drain in the cabin, and it still is working fine.  That’s a real treat.

My worries are that come spring, the ground at that corner of the cabin may smell a little funky, as we are flushing our dishwashing water into that area. There is nothing toxic there at all, but there are bits of food certainly in that water that I’m not sure how readily it will decompose, or worse, attract critters.  If that’s the case, then I will have to either add an extension on, or rebury the end of the pipe.

For now, I’m happy to have it exposed so that I can readily see if it is blocked or not.

1 thought on “Updated Drain Lines in the Cabin”