I don’t have running water in my home.

Neither in, NOR out.  But I’m working on it.

I returned to the cold, dark, dirty confines of the crawlspace under the sauna, and dismantled all of my lovely ABS pipes.

Grandpa used my sledge hammer and a piece of pipe to drive the existing pipe back into the sauna, opening up a larger hole in my footings.

Upon closer examination, I noticed that the electrical cord that connected the generator to the cabin had broken exterior insulation, so I replaced it altogether.

I brought my pipes up into the sauna, where I covered them in insulation.  I then replaced the four foot final length with a six foot one, to ensure that the drain water would not be exposed until it was beyond the footings of the sauna.

We thawed out the places where the existing pipes were frozen and then replaced everything.  I poured a few cups of hot water through, watching it emerge outside, and we declared victory.

The big observation we made was that there was a fair amount of water in the frozen pipes, even though after the last sauna, we had seen water flowing through the pipe at the end of the sauna.  Where did the water come from after we left?

As unlikely as it seemed, it must have been water that was still slowly trickling down the drain from the floor.  We instituted a new “sweep the floor after sauna” and “plug the drains after sauna” policy immediately, to just as immediate results.  The morning after our last sauna, I checked the outside drain pipe and could only find a small trace of ice in it – success!  (?)

This renewed effort had two results – it has encouraged me to try the same thing in the cabin to allow us to drain water there (We’re currently schlepping buckets that are kept under the sink) – and I also pulled the washing machine out of the sauna and brought it into the cabin to thaw out.

We have spent the past couple of months doing laundry VERY sparingly over at Mummu’s, or at the laundromat in town.  Mummu’s washing machine/dryer finally threw in the towel a few weeks ago, an event we feel at least partially responsible for because we obviously increased the laundry load on it in recent times.  While Mummu let me help Grandpa install the new washer/dryer, she declined our offer of helping to pay for it.

In any case, the Panda had lain dormant for the past two or three months in weather ranging between twenty and thirty below.  The most significant fear was for the fact that it had done this with a bit of water in the bottom that didn’t get pumped out before our final freeze-up.

Fearful that the agitator motor or spinning motor or pump had been damaged by the freeze, or perhaps the base had cracked under the pressure, we observed the washing machine closely as it thawed out;  prepared to relegate it to the outdoors if water began leaking onto the floor.

The washer held and so with some trepidation, I poured in a pail of water, some pairs of socks and underwear, and some soap nuts.  I twisted the dial, and low and behold – agitation! 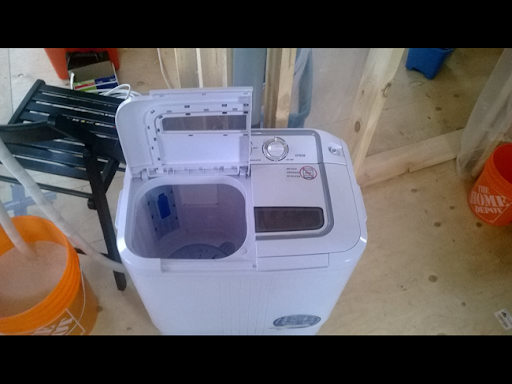 After six minutes (the amount of time I usually select, although the Panda timer can go up to fifteen), I switched it to drain (with the outlet hose in the now empty pail I had used to fill it), and some dirty, foamy water began pumping out and into the pail!  Success!

Finally, after a quick trip to the sauna to retrieve the plastic disc you put on top of the clothes in the spinner, I transferred everything to the spin side and set that for two more minutes of spinning.  This went as normal, although I think I agree with one amazon reviewer who suggested that after being “broken in”, the spinner doesn’t quite remove as much water as it does the first few times it is used.  The clothes still come out as dry as you would expect from a traditional washing machine’s spin cycle, but they didn’t seem as amazingly dehumidified as the first time I tried it.

In any case, I have to admit to being really impressed that this little machine could have been as abused as it was, and it still came back without missing a beat.

For the remainder of this winter, I believe we’ll keep it in the cabin.  It will likely be more convenient this way.  I’m not sure where it will wind up for the future, but wherever it is, it currently is on track to have a special place in my heart.