Well, “road” is perhaps an embellishment.  It’s really a trail created mainly by Grandpa’s snowshoes as he kept a pathway defined for the tractor (initially) and then the ATV (secondly) to get into the bush to retrieve some of the logs we had cut in the fall.

It was reasonably warm (about fifteen or sixteen below) so I strapped on my own snowshoes and proceeded to walk over and over and over our trails all morning.  I can safely say I covered many kilometres as I listened to various podcasts on my Windows Phone.

All in an effort to ensure a hard-packed surface for the ATV.  It still had stock tires on, and as such, wasn’t a spectacular performer in the snow.  Hard packed surfaces seemed fine, but powder rapidly defeated even the four wheel drive.

I took a needed break for lunch, and then afterwards Grandpa and Mummu dropped by to give us our mail (one cheque, numerous flyers) and then Grandpa and I disconnected the plough from the ATV and I headed up the trail.

Easily navigating to the cabin gave me a false sense of optimism.  As soon as I got past the cabin, I slid off the packed surface and into some powder.  Gunning the engine I was able to climb out of it, and then clawed my way up a short incline where I got stuck at the top.  At that point we realized that this was one of our best sections of trail, and the pursuit was not going to be very productive.

A short distance ahead was a turnaround I had pre-planned.  Experience with the tractor had convinced me to try to have turnarounds at regular spots along any vehicular trails.  If we could just get to the turnaround, we’d at least be able to more easily, literally “turn around” and return to the dojo tent with my tail between my legs. 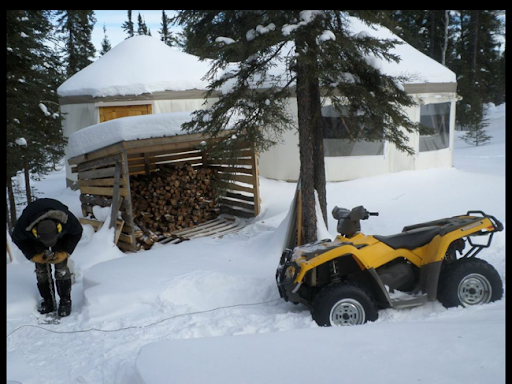 Hooking up the extremely convenient winch, I was able to drag myself back onto the trail, and gunned the engine until I was just past the turnaround.  With Grandpa pushing, I backed into the turnaround where I got stuck again.  Winching again got me on the trail (trial?) and I disconnected and then opened her up to rush all the way back to the firm footings at the cabin.

This is disappointing, but not the end of the world just yet.  I think I will have to head to town to purchase some standard two-by-fours to complete the interior of the cabin, rather than cutting them myself.

Now I have to try to figure out a logging arch or some sort of system for getting logs out of my bush in the summer without dragging them through the dirt.

2 thoughts on “The ATV on the Snow Road”