Last week it was with great excitement that I picked up a truck load of v-joint white pine panelling from Howie’s Saw and got it unloaded into the cabin.  Now we had a good excuse to begin work on our interior walls!

Up until now, we had been living in a VERY open concept cabin.  We utilized wire rack shelving as a way of defining the bathroom.  It did very little to promote a sense of privacy – we hung our coats on the shelving and that did much to block off the visuals, but certainly no other ways in which a bathroom conveys its presence to our senses.

Upstairs was a similar, but perhaps less dramatic situation.  Kenny had his area at the east end of the cabin, and Donna and I had ours at the west end.  It really facilitated Kenny’s mid-night hikes from his bed, over Mama, and in between the two of us.

Then the panelling arrived, and shortly after, Grandpa showed up and we proceeded to bring in some of the two-by-fours that I had been milling up until now. 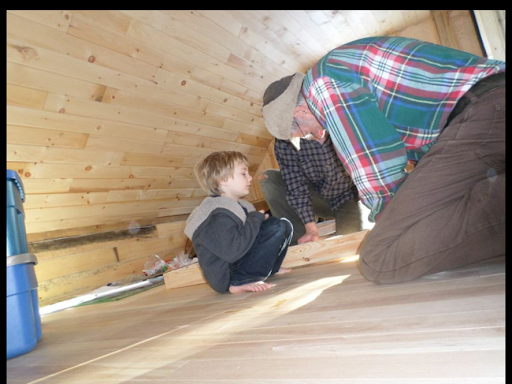 We first finished the panelling on the outside wall and ceiling.  This allowed us to then proceed to the interior wall. 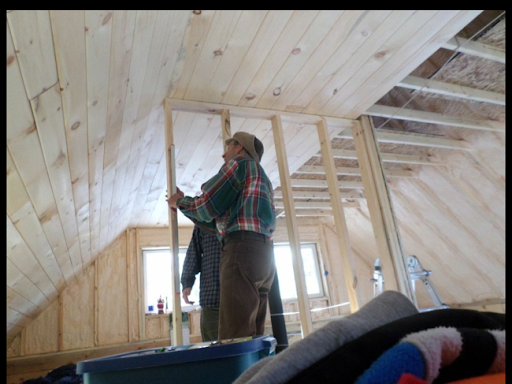 Because the interior wall had a section with a flat ceiling, and a section with an angled ceiling, we opted to build it in two sections.  One was a traditional rectangular section, which we built on the floor and then lifted into position.  With it secured, we built the remaining irregular wall in situ, toe-screwing (is that a word?  If not, it should be…) the studs into position.

This was exciting!  We could really see two rooms coming into being! 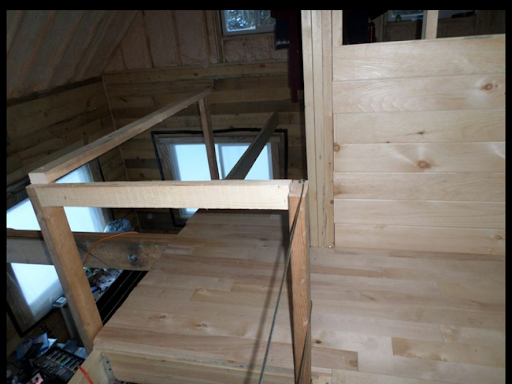 One consequence of having the upstairs divided was that there was no longer going to be an easy path between Kenny’s “room” and the other “room” – so I extended my temporary railing around the landing and cleared it off.  This really opened up things and made it seem that much more finished. 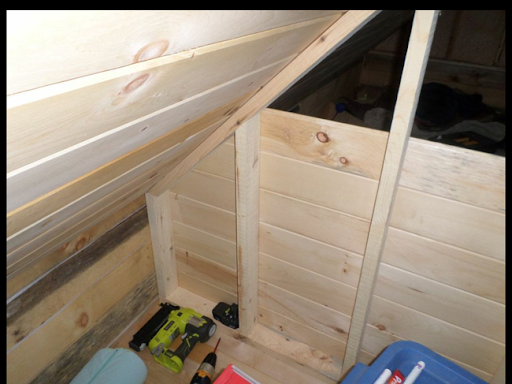 Over the course of the next two days, Grandpa and I cut and completed enough panelling to finish one side of the wall.  I left the other side unfinished because I believe I will put most of the wiring in the interior wall – one outlet low and centred for computers or tablets or things like that, and then another, switched outlet up high for some LED lighting.  After some discussion, I also will likely add another outlet on the remaining wall which will separate these rooms from the main cabin.  I’ll try to put it low and towards the outside walls, so that if a desk it positioned under the window, there will be a nearby option to plug in something there.

Subsequently, we also worked down on the main floor and were able to frame in the bathroom (most people would call it a “powder room” due to its tiny footprint).

We’ll see how far my current stock of lumber goes and if we can build up a few more walls.  Current plans are that we’ll continue to use the main floor “bedroom” as the workshop, and only move into it when the cabin is essentially completed (perhaps omitting trim work).

1 thought on “Starting on Interior Walls in our Log Cabin”