With the ongoing “Polar Vortex” dropping even more -30 degree weather on us for days and days at a time, it was clear that the Yanmar was NOT up to the task of ploughing out our driveway or skidding logs. I can confirm that it was getting more and more difficult to use it as a snow removal tool, having the main blade in BACK of the machine, and needing extended periods of time or generator power to get her running.

As such, I started thinking about my needs/wants in a homestead machine, and what was within the realm of possibility. 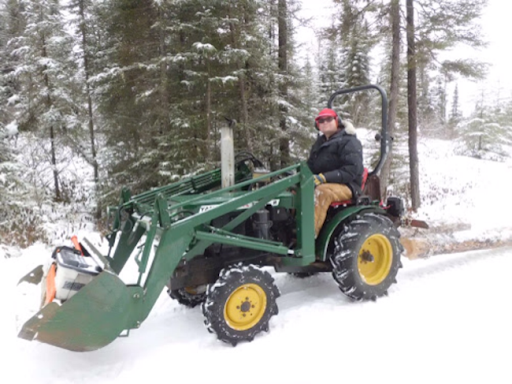 Now that the landscaping was mostly complete, the bucket on the tractor was much more a liability than an asset.  It made it difficult to manouver in the bush, and to see how close I was to the edge of the driveway while ploughing.  I didn’t need the bucket any longer.

The diesel engine was also a bit out of place here.  It was the only diesel engine we had, so it required its own fuel supply, oil and hydraulic fluid.

After a bit of thought, I began to wonder if maybe a four wheel drive ATV would fit in any better.

Consulting with kijiji, I saw that price wise, I could likely fetch about the same for the tractor as I would have to pay for an ATV and plough.

I mentioned to K! down at KC Automotive that I was thinking of selling the tractor, and later that day his top mechanic, E! called and expressed interest in it for his small ranch.

He looked it over that weekend, and then decided he was willing to give it a go and came down a few days later with a trailer to load it up.

Grandpa and I spent a bit of time getting her started, as it was quite a cool day, but we eventually did with a bit of a boost.

Distressingly, as E! loaded it onto the trailer, grey, foamy liquid began to purge from around the gear shifter.

We pondered the implications but E! decided to take the tractor anyway and investigate further.  I rushed inside to do a bit of research and it didn’t seem as critical as I first thought; it appears to be a fairly common occurance on the Yanmar’s that water can leak into the transmission fluid around that gear shift. It should be fixed by keeping her dry and replacing the fluid.  Luckily I had given him a five gallon bucket of fluid to go with the tractor.  I haven’t heard back from him now for a few days, and so I’m assuming that he made out okay.

A few days later, Grandpa and I called a fellow who had a Bombardier Outlander for sale, complete with the plough.  Upon meeting him down by the Neebing Roadhouse, we discovered that we had an acquaintance in common!  Young J!W! who had been working at The Athletic Club here in Thunder Bay – someone I knew well from church!  Small world eh? 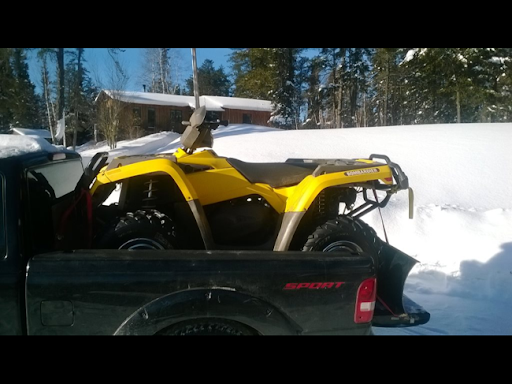 After some friendly negotiations, we agreed on a price and delightfully were able to load the ATV right into the back of my Ranger.  Plough and all!  I have to tell you that was quite a relief – arranging a trailer or different truck would have added quite a level of difficulty, and the fact that in the future if I do need to move the ATV for repairs or some other reason, it means much less expense and difficulty.

Arriving back at Mummu and Grandpa’s house, we proceeded to back up against the berm they had beside the driveway.  It still was quite a drop through the snow from the tailgate, so Grandpa and I piled up some two by ten boards to make for a bit of a “ramp” behind the truck.

With some trepidation I fired up the engine and hit the gas.

Yes, I was in reverse – in case you were expecting another disaster.

Actually, she backed off the truck perfectly on the first go.  Grandpa drove the truck forward and then kicked the boards out from under the front tires of the ATV.  Once she was more level with the snowbank, I simply drove her forward out onto his driveway.

We hooked up the plough and I switched to high gear to drive her gingerly along the short shoulder between our driveway entrances.

Right away I ploughed out the large portion of our driveway by the sawmill that I had previously abandoned.  It went pretty good – I had to push back the banks a few times, raising the plough blade as the ATV began to be rebuffed.

This encouraged me to try to plough out the driveway between the dojo tent and the cabin – here’s where I bit off more than I could chew.  The Outlander couldn’t push that much untouched snow (with a hard packed centre where we have been walking) for more than a few feet.  I eventually broke out the shovel and moved the small bank I had created, and then tried to just drive down to the cabin and back.

This too was optimistic.  The Outlander got stuck twice, in spite of the four wheel drive.

I hooked up the comealong and winched her back to the dojo tent.  My current thoughts are that I need to pack down the trails that I want to try her out on with my snowshoes first.  Grandpa has been doing that already, and now I plan on taking some time to follow up on this.

Perhaps tire chains would help?  I seem to see mixed opinions on them so I’ll hold off on another purchase for now.

The plough is a bit of a liability when you are not intending to clear the snow – it makes you much wider, and doesn’t raise up high enough to avoid getting caught up on the banks on either side of a narrow path.

The plough also means that you can’t use the built-in winch to pull yourself free of difficult spots.

The Outlander is very challenging to shift at times.  It appears that this is a very common problem.  I don’t want to bend or break my shifter, so I will try the “Outlander Hump” whereby you rock forwards and backwards on the machine while shifting.

There is an engine kill switch – I don’t see why you would use it, but if you do, make sure you switch it off again (on again?  I’m not sure about the nomenclature) before restarting, or you won’t be able to restart and will scratch your head for awhile.

The starting ability of a gasoline engine in the cold vs. the diesel is just outstanding.  It’s so nice to be able to fire up the engine inside of one minute, instead of ten or more.  This is a huge selling feature!

The view from the ATV is nicer.  You ride lower, so it’s a more comfortable feeling.  Mounting and dismounting are hugely easier – you can get on from either side, and don’t need to contend with so many levers and a huge steering wheel.  Even if you can’t see what you want from the seat, it’s a simple matter to stand up and gain a great new perspective.

Surprisingly to me, the ATV doesn’t turn quite as tightly as I would have expected.  Not a huge deal, as it is still much easier to do three or more point turns on the ATV than the tractor with the loader on the front and the grader blade on the back.

The next big test will be to see how it performs on the bush trails without the plough.  That, and skidding a log or two back to the sawmill. 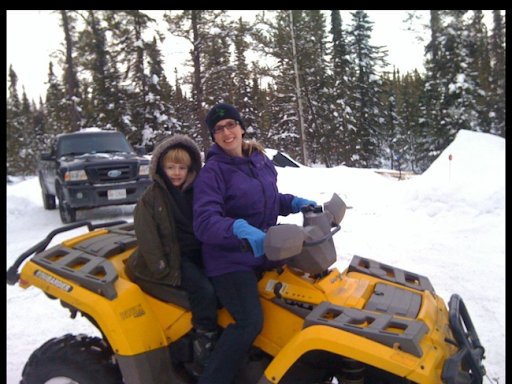