I did not really relish the thought of heading under the sauna floor in winter to pour boiling water on the drain lines to thaw them.  I had purchased two different heat cables to wrap around the lines and plug in to see if that would work, temporarily, but each of the cables insisted that they needed to be insulated, and that they were a preventative measure, and were not really capable of thawing already frozen lines.  Sigh.

I came up with the notion of putting one or two small electric heaters into the crawlspace and letting them warm up that area safely and easily.  I purchased two small heaters and then ran the generator for the better part of a day before heading down to see what they had accomplished.

I was sorely disappointed.  They seemed to have barely put out any heat, and I couldn’t say that they had made any more difference than just running the stove throughout the day with the cover off the crawlspace entrance.

I did notice that the floor drains had open water in them, rather than ice, so I actually put my lungs into service, and crouched down on the floor and *blew* down the drain.  After a moment’s hesitation, water burbled up through the OTHER floor drain.  This told me that everything was thawed between the two.

I poured a few cups of boiling water down the drain and blew it through to ensure everything was melted.  I then did similar to the laundry tub, although I was unable (unwilling?) to try to get my head to the bottom of the sink to blow out the ice there.  Instead, I exercised some patience.

Finally, I bit the bullet and crawled under the floor.  Imagine my surprise (delight?) at finding that there was no ice in any of my drain pipes down there.  I shook them physically all the way over to the foundation wall, and realized that the blockage was outside somewhere.

Grandpa had dug out the greywater pit and insisted that there was open water there, so the end of the pipe wasn’t the location of the blockage. 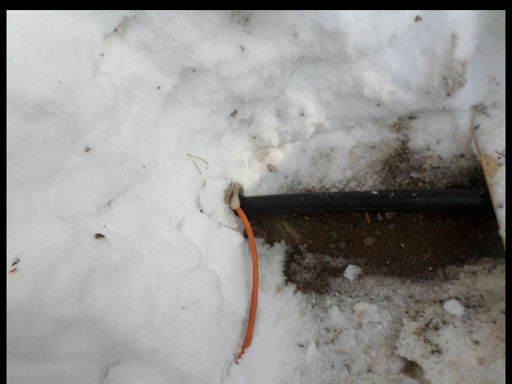 Instead, we dug out the pipe just outside the sauna.  In hindsight, this is a somewhat obvious spot – it had no cover whatsoever besides snow.  It ran directly across solid (likely very cold) rock.

In our defense, it WAS still on a fair slope, but we decided to go low-tech.  I simply cut off the pipe about eighteen inches outside the foundation.  This ensured that everything should drain away from the sauna, and that I can easily assess the drainage at any time.  In the spring I will either re-connect to the greywater system, or else simply screen the end.

There is nothing going down the hose that I would ever worry about in terms of contamination.  It will always be well over 99% water, with soap nuts and other natural particulates (Bare Organics soaps and lotions, as well as icky stuff [i.e. hair, sweat, dirt.])

In any case, cutting through the pipe revealed an immediate block of solid ice.  I poured some boiling water over the end until a chunk came out.  Then I proceeded to pour some water directly into the open end of the hose and held it up so that the water flowed in towards the blockage.  Hold a few seconds, then drop the hose to drain it.  As I felt the water draining out, it was ice cold.  Clear indication that the ice was being melted by my boiling water.  That was a good sign! 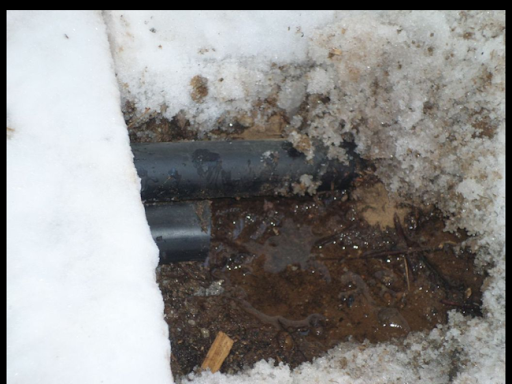 As they say, lather, rinse, repeat.  I repeated this four or five more times, until the amount of water flowing out was clearly more than what I had poured in.  After a burble or two, a gusher!  Yeah!  The sauna drains were open!

Grandpa wedged a board over top of the drain to keep it sloping downwards, and I giddily reported back to Donna a success!

I fired up the sauna and we bathed that evening using melted snow. We hope to do laundry next time by hauling a few buckets of water from Mummu and Grandpa’s place.  I still fear that thawing the main water line from the well may be a bigger challenge.