In as much as we are choosing simplicity (or at least, professing to), we are part of a generation that would find life without internet access to be a bit too primitive and limiting to stomach.

Like any other tool, the internet has the capability to do as much harm as benefit.  One can easily waste hours a day on less than noble pursuits checking on the latest meme’s and cat pictures (I’m looking at you Reddit, Digg, and (occasionally Boing Boing!))

We were very blessed to have found an early internet solution that worked amazingly well for us.  SpeakOut Wireless offered SIM cards with unlimited “browsing” for only $10 per month!  I didn’t hesitate to do a test run on our iPad (which has 3G capability) and found it worked marvelously with a few caveats.

Their network ran through a proxy server which seemed to block a number of services.  While we could surf and email without a problem, and watch youtube, we were blocked from downloading apps or using any instant messenger platforms.  These concessions were totally acceptable at the price we were paying.

I reread the contract, which stipulated that you could not use the SIM “in a device in a manner to which it was not immediately designed” – I believe they were talking about tethering, something that was somehow blocked by their proxy anyway. 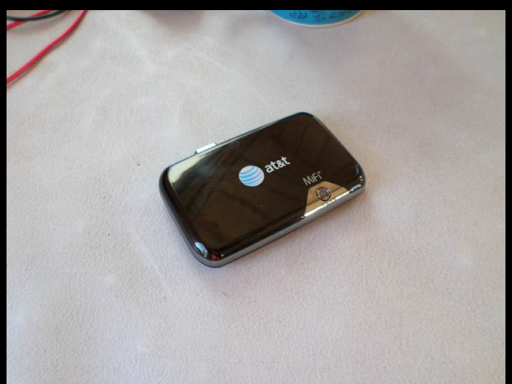 After a few failed starts, I was able to find a genuine AT&T mifi router which worked with our SIM, and that opened up a whole new world for us.  We could download podcasts to our phones and ipod to listen to after dark!

And, technically sharing internet amongst multiple devices was exactly what it was designed to do!   On top of this, we could then easily take the internet with us on road trips!

Alas, eventually the party ended.  One evening when friends came to visit, I magnanimously told them to hook on to our wifi – they couldn’t, and I suggested I would take a look in the morning.  That’s when I noted that I too couldn’t connect.  The next morning, I investigated further and found that we had been cut off.  Apparently the unlimited browsing was actually only 2GB.  I’m not sure who had more cause to argue – me for getting cut off at 2GB when they clearly advertised unlimited – or them, because I was really bending the intended use of the SIM with my choice of a router instead of a phone for the SIM.  This suspiciously coincided with their eliminating the unlimited browsing option to introduce a new pay plan – $10/100MB.  A ridiculous plan, even for the most frugal of users!

I switched to TBayTel’s SIM package, but it proved to be prohibitively expensive to pay per GB used.  With the initial tier set at 500MB, downloading a Windows Service Pack for one of my clients could wipe out a month’s worth of internet in an hour.

Luckily TBayTel also offers a Motorola “Canopy” service.  Although it has a high up-front cost for the equipment (about $300), the monthly cost of $40 buys me between 1.5 and 3Mbps download and no bandwidth caps.

A month after applying, we were approved for installation and the fellows arrived in twenty below weather to put up the small dish involved.

My fears that we were not in a good location were assuaged when they laughingly described how they were able to get a good signal with the dish still sitting in their laps, in their truck, without even worrying about properly aligning it or any of the tweaking involved.

One down side is that the dish requires a small wall-wart transformer drawing between 1 and 2 amps.  This cannot be helped.  We also have the wireless router drawing about the same, so I have ordered up a really low power router (USB powered) to complement this system and see how that works.

After two weeks, suddenly the connection dropped.  It became intermittent and then non-existant.

The installers arrived a week after I called and reported that the problem was that the signal was “too strong” and the dish was getting “flooded” with signal.  TBayTel turned down the signal remotely, and things worked for an hour or two before we left on Christmas vacation.

We returned and the internet worked for about a day, then the same thing…  Intermittent, and then non-existant.

Annoyingly it took over a week for them to get back to us.  I suppose the thirty below temperatures didn’t help with their ability to keep up with installations.  One has to be pragmatic in these situations. 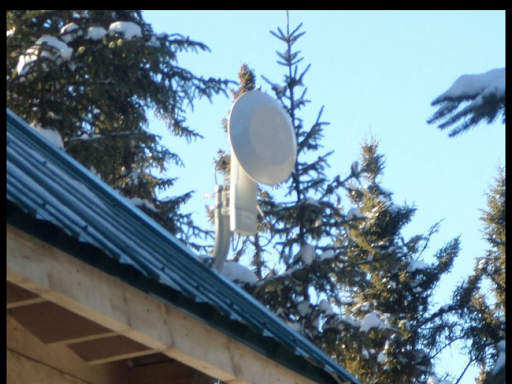 Finally they came back and simply replaced the dish.  They re-aligned it with an even stronger signal than before (54 dBi and a Jitter of 2, for people tracking that sort of thing…)  They insist that any further problems will definitely be at the tower/TBayTel end of things, not with my installation.

We had internet for a couple more hours until the sun shone down strong on my solar panels, driving up the voltage over 15.5 volts, which trips my inverter and we have to wait until sundown before we can turn the power back on.

If you are reading this blog post as is, then the internet came back with the power.  Otherwise, I’ll complain further below :).