Using a ladder to travel between the main floor of the cabin and the loft got very old, very quickly.  My poor feet have had enough of walking on ladder rungs in less than supportive footwear.  Especially if we were carrying anything other than ourselves! 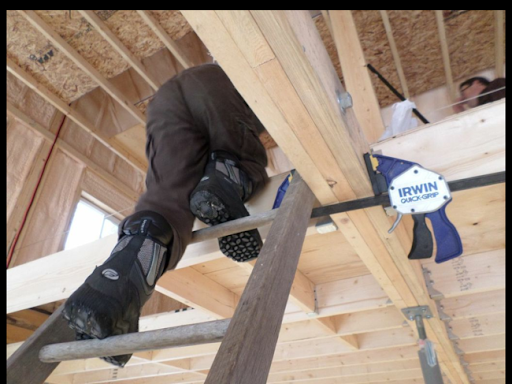 With that in mind, I quickly purchased the initial materials to construct a set of simple but sturdy stairs.  I opted to go with two by ten inch construction to ensure strength and stability.  I am pleased that I did not go any smaller.

One thing that was shockingly expensive was the steel hardware to actually assemble the runners and attach the stairs to the floor and landing.  I had considered making these parts out of lumber, but then felt that speed of construction and finished look would influence this decision.  I almost returned to building them myself when I realized how dear they were – but I wanted to get the stairs up quickly, and liked the look of the wood and steel working in unison.

It took a fair bit of “figuring” to get the angles correct for the stairs.  Unfortunately they could not be put at my new favourite angle – 45 degrees.  This would have had them finishing too close to the outside wall to be comfortable, and also I have a “trap door” in the floor at the bottom of the stairs to access the crawl space, and this door would have been too covered by the bottom stair if the stairs were at any less of an angle.

As such, they are at about a 58 degree angle.  It is much better than I had feared.

An early error I made was to measure along the upper length of the stairs and divide my treads up at eight inch intervals.  I had in my head an eight inch tread height as being a good compromise between the steepness of the stairs, and my desire to not build more treads than I had to.

Of course, I forgot to take into account the fact that my stairs were not at a ninety degree angle, so when I tilted each tread to make it level, I wound up with a tread height of more like six and three quarter inches.  This is still considered an acceptable tread height in some building codes.

I was reluctant to replace the sides of my stairs because of the screw holes already in place, so I accepted this oversight.  It was purely a matter of not conforming to my original thought, and didn’t have any real effect on the utility of the stairs. 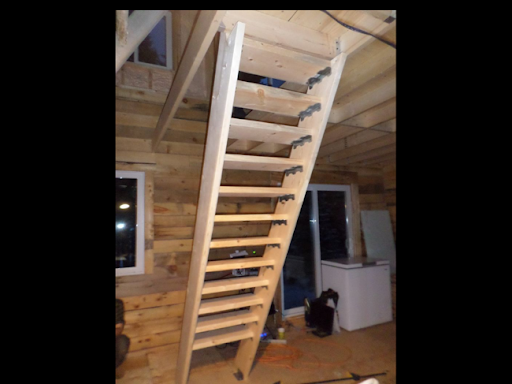 Or, lack of utility as the case turned out.  As I placed the final tread available (I was actually two treads short – another miscalculation that I felt would be easily fixed with another trip to the lumber yard), I felt the stairs at least LOOKED like real stairs.

Walking up them was a totally different matter.  Due to the steepness, the treads overlapped one another by six inches.  This only left a tread depth of four inches.  Trying to walk up the stairs in a normal matter was rather treacherous.  One’s toe was constantly catching on the tread already occupied by the opposite foot.  Then when your foot came down, it was only on the ball of your foot that you could get your purchase.

We endured this for about a week while I hatched my next plot.

What goes around, comes around.  I had originally considered my options if I was unable to get a proper set of stairs into the cabin.  Spiral stairs were thought of, but discarded as too difficult to either build, or fit into our plans.

The ladder was something that perhaps Kenny could endure for years, but this is not just our cabin, it’s also our home.  A ladder as a day-to-day item was just not in the cards.

And so it was, I felt I had been backed into the corner of building my “paddle stairs” or “alternating tread stairs”.

I looked up a few pictures of crazy concepts online, and opted to try to create something fairly simple and traditional looking.

I purchased a bandsaw (fortunately on sale at Canadian Tire for the same price that people were asking for on Kijiji). 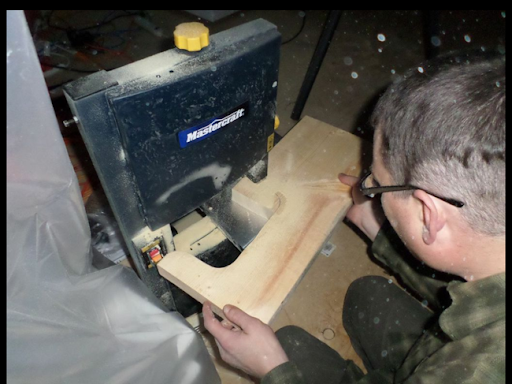 The nine inch depth of the bandsaw looked to be a huge liability after I tried cutting my first template.  But in frustration, when my tread hit the side of the bandsaw, I continued to push the free end of the board forward in an arc.  This turned serendipidous, as the arc was quite shallow but aesthetically pleasing.  I flipped the next tread upside down and repeated the process.  The two treads meshed very nicely when replaced on the stairway, and I continued working my way along all my treads.  Thus I have treads that are about a foot wide, with gaps that are about nine inches.  The treads alternate their way up the run. 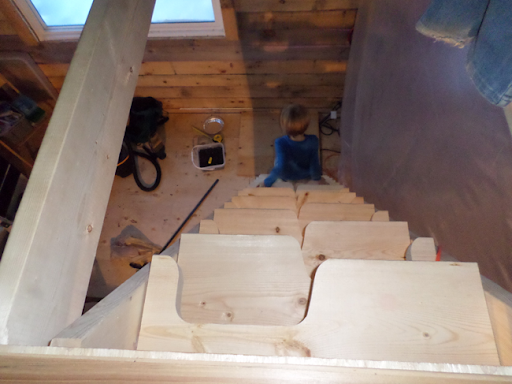 Once complete, I mounted the stairs for the first time and was quite comfortable to climb them to the top.  Coming down is even more comfortable for me, I suppose because I can see the treads I am approaching. 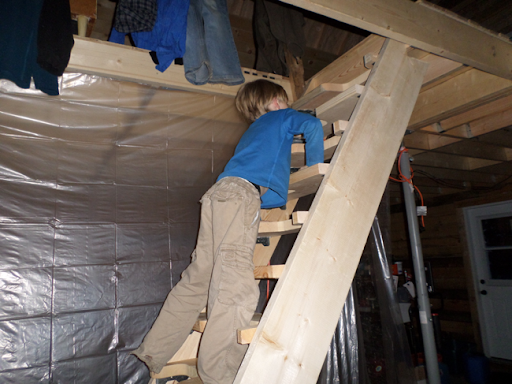 Kenny is contrarian, and says he prefers the old stairs, which perhaps suit his smaller feet better.  I have a feeling that won’t last as he grows and comes to appreciate the sizing of these ones.

Donna feels they are a big improvement, although the final stair only had a tread depth of about five inches, due to it being up against the landing.  I’m trying to come up with a solution to this issue, although it doesn’t seem to be a deal-breaker.

In any case, now we feel much more at ease heading up and down the stairs on a regular basis.  The final touch will be a railing for anyone who has any qualms about them.  I’m planning on mounting it against the inner wall, but we shall see how things proceed.