It was a sombre moment a few days ago when I saw my Mom’s name come up on my call display.  As expected, she was calling to let me know that my Grandpa had just passed away.  This, on the heels of learning that our family friend (and huge influence on my life) R!L! had also suddenly passed on, was a tough thing to take in.  It really made for a tough few days.

All these events were transpiring while the roof was going up, and inside there was lots of work for me to accomplish.  Even as the roofers were putting down the steel, I was getting the stove up and running.

First Grandpa and I finished insulating, vapour barriering (is that a word?), and screwing down the plywood on the floor. 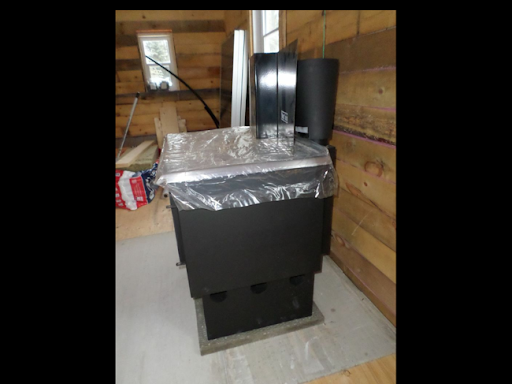 Then I located the spot for the woodstove, and we screwed down two sheets of DuRock, to make an approximate five foot by five foot square. 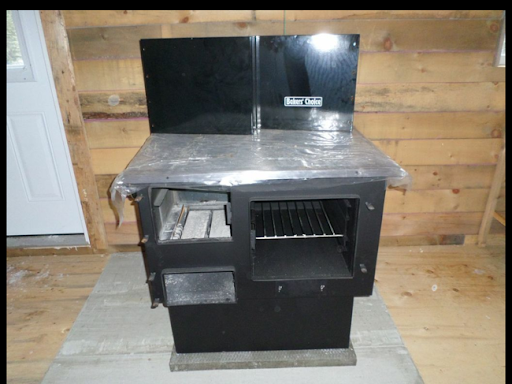 Donna had noted that the woodstove surface was ever so slightly low for her, so I opted to put a patio stone down under it.  The footprint was nearly identical in dimensions to a stone, so it seemed to make good sense. 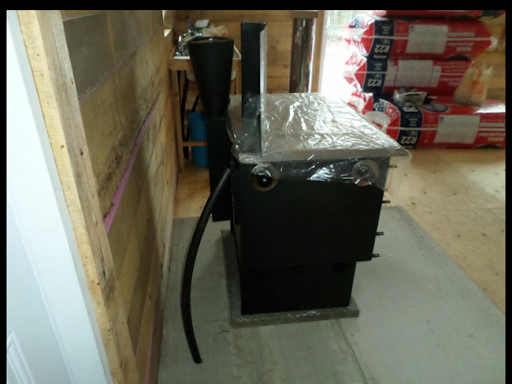 Here you can see the poly pipe for “hot water” to be  carried to the bathroom and kitchen sinks.  It remains to be seen how well this works.  I believe I will have to put some sort of adapter from the reservoir to the poly pipe to space it away from the heat of the stove. 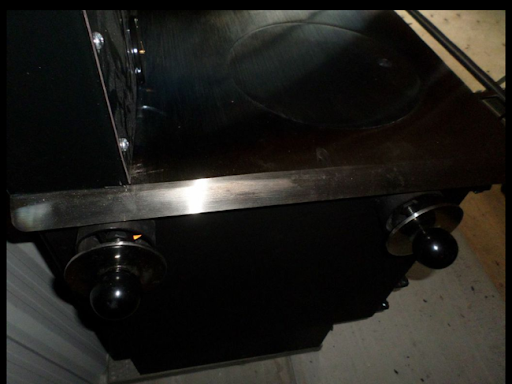 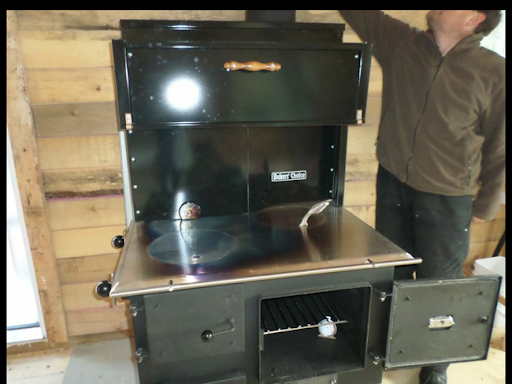 Reinstalling the doors on the stove was a snap.  The rest of it was a much larger head-scratcher.  We didn’t receive any assembly instructions, and it wasn’t quite as obvious as one may think. 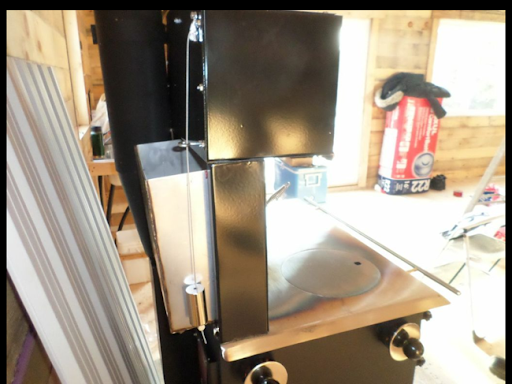 The two side supports were obvious, and locating the water reservoir was pretty straightforward.  When it came to the warming closet though, things became more complicated.  Notwithstanding a small modification I made to the warming closet that I will relate in a moment, one had to hold the nuts for the warming closet from underneath, in a location that was actually INSIDE the water reservoir.  This was very frustrating and difficult.  The end of the stainless steel was razor sharp and unforgiving.  The backs of my fingers still show scars from that particular battle. 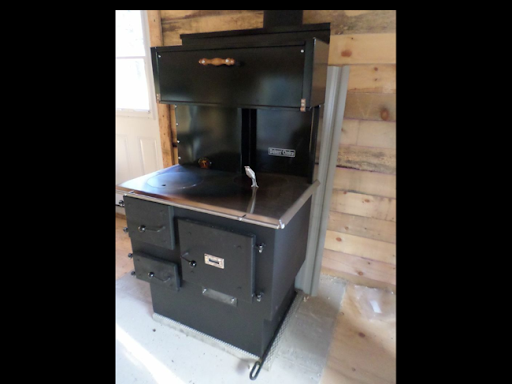 A sheet of spare steel for a heat shield would suffice until we were ready to move in.

The stove has a 7″ oval stove pipe fitting.  They ship the stove with a single-wall stainless oval to round adapter.  This looked to work great, except I was trying to minimize clearances with the stove, and you have to work out from your weakest link.  This would have been the adapter – and single wall wasn’t going to cut it. 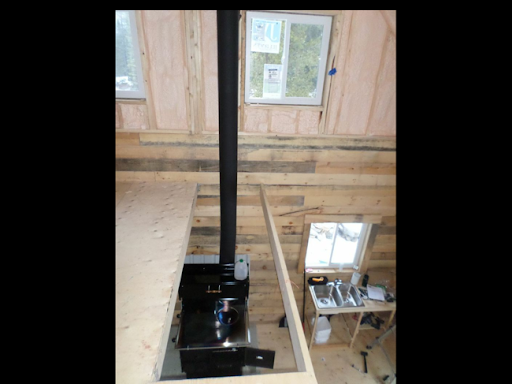 The helpful fellows at Thunder Bay Fireplaces suggested I purchase a foot long piece of double wall stove pipe, and just force it onto the oval fitting as an adapter.  I had to use my tin-snips to also cut away part of the base to get it to fit onto the stove.  Even so, it was leaning back at a fair angle, and I ended up also modifying with snips the next piece of pipe.

This all served to finally get the stove pipe running straight up from the back of the stove.   It looked pretty good!

Then I went to install the warming closet and realized that it stuck out the back of the stove about two or three inches!  Once again, I was bitten by the Law of Unintended Consequences – the most important law of the homestead! 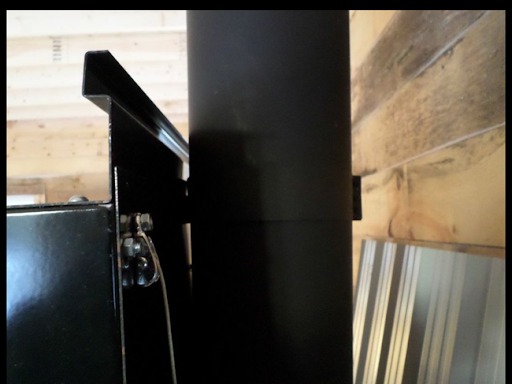 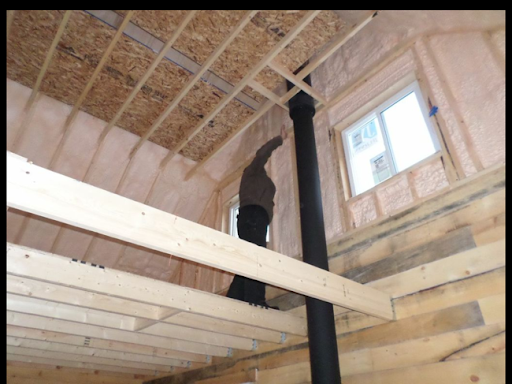 The double-walled stove pipe is really remarkable!  I find that I can rest my hand on the outside of it most of the time, even with the fire going merrily away – this almost seems to be better performance than the all stainless and all insulated Selkirk pipe I have in the sauna which seems to get too hot to touch (although not scorching hot). 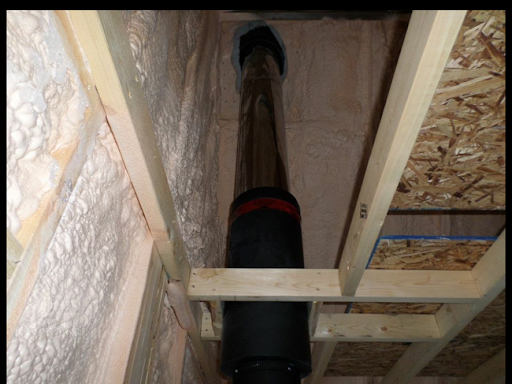 With a little bit of shuffling back and forth, I managed to get the stovepipe seven inches off of the outside wall (code calls for six, but I want to leave room to panel the wall behind the pipe next fall).  I also think I did a pretty good job of making it straight up to the collar where it switches to insulated pipe for the trip through the roof. 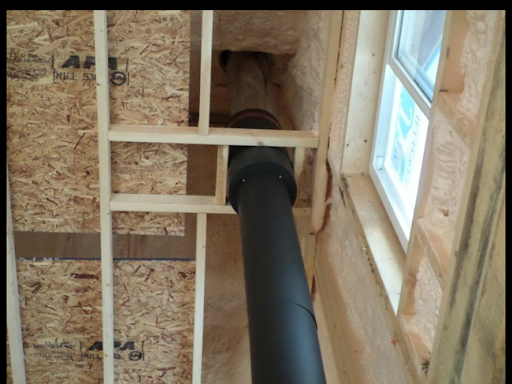 At the collar, I installed the telescoping piece of pipe.  This should allow the cabin to settle a number of inches and not have any effect on the chimney. 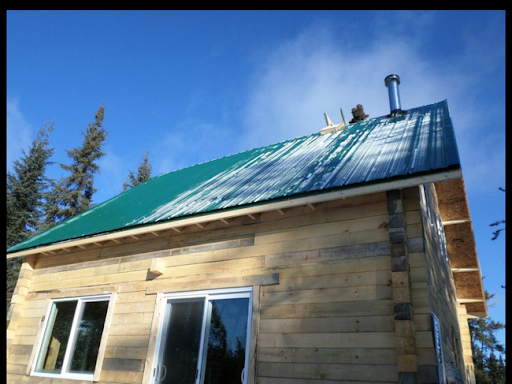 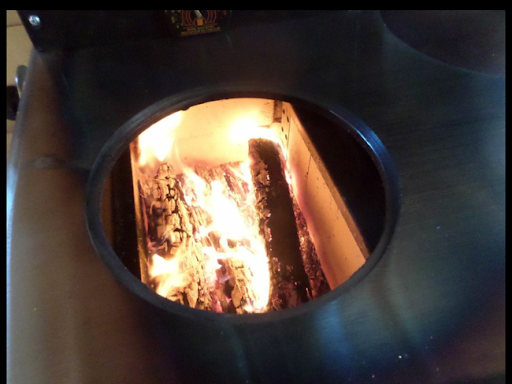 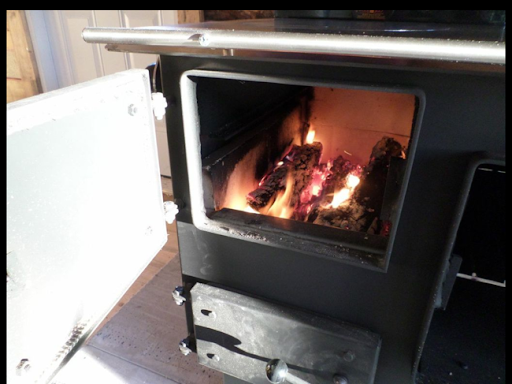 One thing I have noticed – the firebox is not as deep as I had anticipated.  I was spoiled in this respect with the box stove, which has a VERY deep firebox.  The literature on the Baker’s Choice also describes a deep firebox so I hadn’t been cutting my wood much shorter.  We have been finding that a number of my logs need to be put in diagonally to fit, or resting on the lip inside the door.  This isn’t a huge hardship, but just something I personally have noticed.  If there are logs that are simply  too long, we set them aside to use in the sauna, where the stove still has a pretty deep firebox.

While Kyle was still fastening down the steel roof, I fired up the stove with much excitement and trepidation.  It took me three or four goes to finally get her lit.  But when I did – it was pretty awesome!  The draught is excellent with a straight, tall chimney effect. 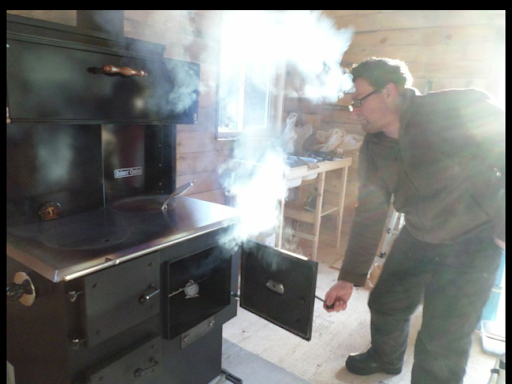 One of the adventures of a new stove and new stove pipe is “curing” the paint.  Here I open up the oven door after a few minutes of heating it up good and hot and you can see the smoke pour out.  It no longer does this, although sometimes with a hot fire we do still notice an odour.

We have made a number of soups on the top of the stove, and I think I am correct in stating that it gets much warmer on top than our box stove in the yurts.  We can boil water much more quickly and readily now than we did in the yurts.

We normally keep the damper closed to force the smoke around the oven, and then leave the oven door open.  Suppertime Stoves suggests this is the best way to use the stove to heat up your living space. 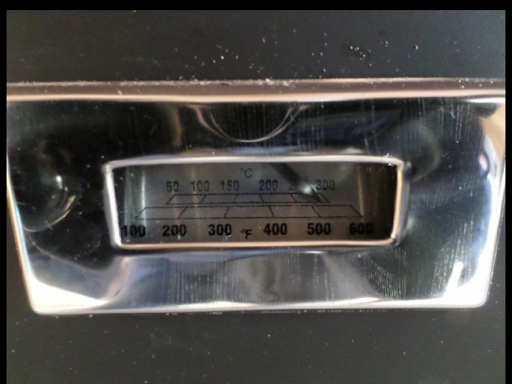 Joy of joys – we even had pizza one night!  As you can see, we can get the oven quite warm, and having pizza from a wood-fired oven is just sooooo thrilling!  For someone raised in a culture with ready access to an oven for baking, having something baked after 18 months of stove-top food is a real luxury.

The other nice thing about this stove is that it is (or nearly is) air-tight.  At night we can dial shut the air vents and close the door tight, and the fire continues to throw heat for hours.  So far we have been able to wake up about half the time and find coals enough to just add more wood and get the stove to come back to life.  This is practically un-heard of in the old box stove in our yurts! 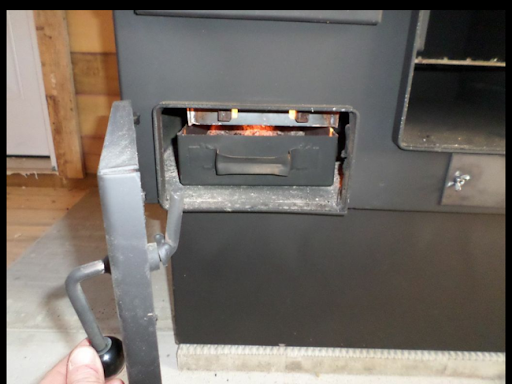 The ash-pan is a nice feature.  We find that we have to empty it every three or four days at our current burns.  I also find that in spite of the warning to not open the ash pan door while a fire is going, it actually can be very helpful when you are having trouble getting the fire lit.  The draught from having air intake UNDER the wood is amazing, and it is thrilling to hear the roar of the air and fire mixing this way.  I always close it back up again when I am sure the fire is going to take, and I never leave it open when I am not directly tending the fire.

Upstairs in the cabin is always super-toasty warm while the fire is going.  I often fall asleep on top of the covers and only migrate under them a few hours later when it cools off a bit.

The main floor is generally cool, but nothing like what we encountered in the yurts.  I am confident that when I find and seal all the cracks, and then next year add a vapour barrier and panelling, we’ll be super warm down here as well.