Bright and early Monday (well, shortly after eight – that’s as soon as it gets bright enough to work here in Thunder Bay now…) Ranta Construction showed up to get cracking on our cabin roof. 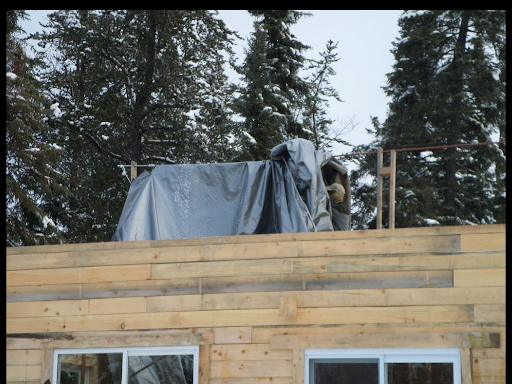 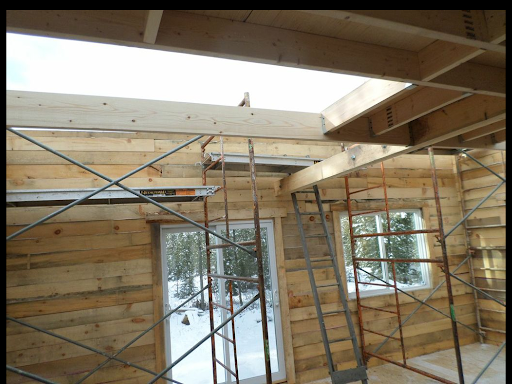 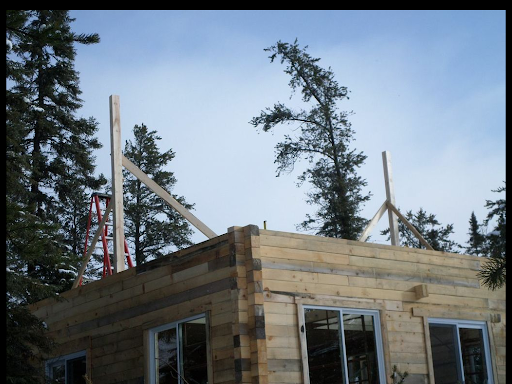 It was amazing how quickly things appeared to go together that first day.   First some support posts at each end. 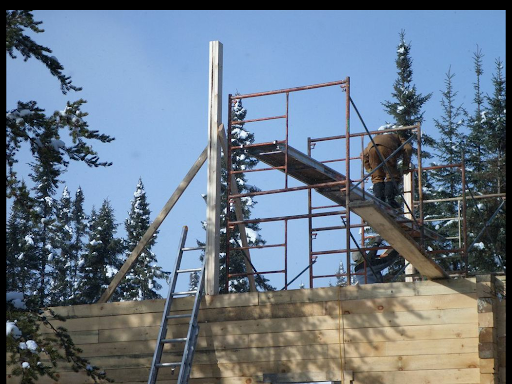 Then a long ridge beam, and another support post in the middle. 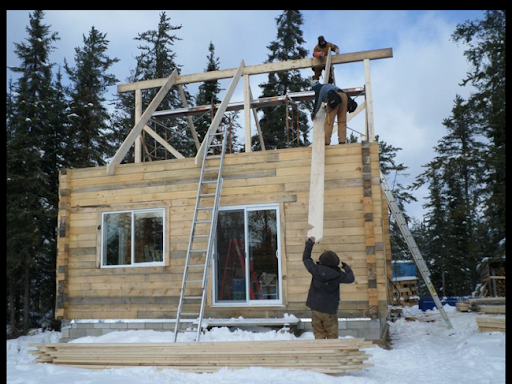 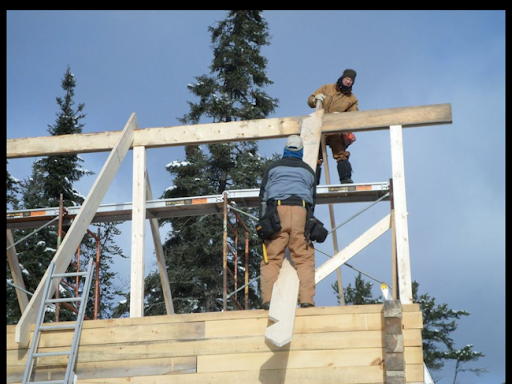 After that, with Jeffrey cutting rafters and Kyle and Ryan skillfully and bravely assembling them, things began to take shape in no time. 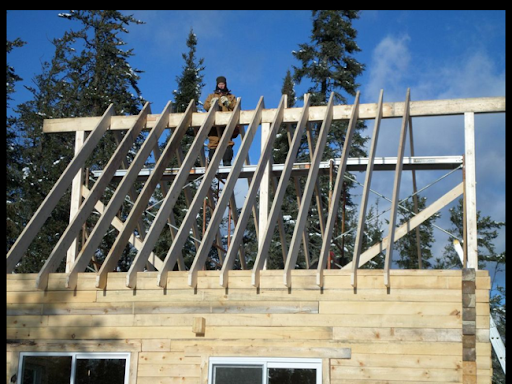 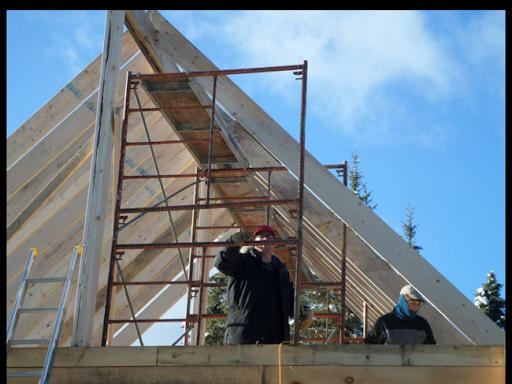 I couldn’t help but insert myself into the thick of things a number of times (although I don’t believe I provided any assistance.  Kyle charges double when the client helps – a wise fellow!) to see how things looked.

I was very tickled to see just how much sun exposure the top of the cabin receives compared to where my panels are currently located ha ha!  (Get it?  Solar electricity – *currently* located…  Oh, don’t act shocked at my dumb electrical puns – you knew I couldn’t resist!) 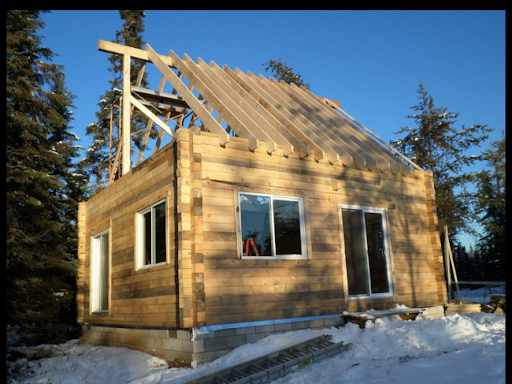 After a day or two though, I did come to notice that one of my jack pine trees does provide a little shade – I think that this is a very temporary thing though, dependant on this exact time of year.  It is enough to convince me to wire my panels in parallel rather than series.  While my new controller can handle up to 150 volts on the input side, I am using 4 gauge cables for about a twenty foot run.  Plenty enough that even at 24 volts I won’t suffer much in the way of cable losses.  And wiring solar panels in parallel means that if one panel is partially shaded, it won’t limit the current on the other panels, the way they would if they were in series. 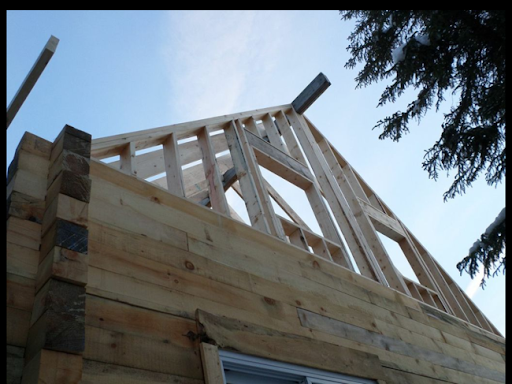 The first day was clearly the glory day.  The second day as they framed the gable ends, things didn’t change that dramatically. 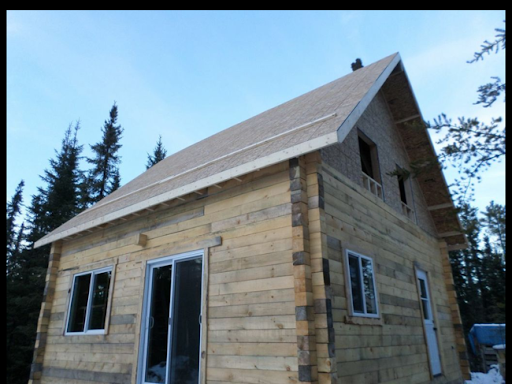 Day three though, that was another big one!  The sheeting went up and one could really see how the roofline and cabin came together.  It was up until this point that I still had a feeling that the pitch of the cabin roof would overwhelm the overall look of things.  Now I’m a fair bit more relaxed.  I think that the roof doesn’t overpower the cabin, and complements it nicely.  It also provides a very comfortable second floor space for Kenny’s room as well as a spare bedroom/office.

Family and Children’s Services of Thunder Bay rang me up the other day to see if we were still entertaining the thought of fostering a child in the near future.  I assured them we were, but that we still needed to have a roof over our own heads before we could think to provide one for others.  They will reconnect with us in the spring to see where we are at. 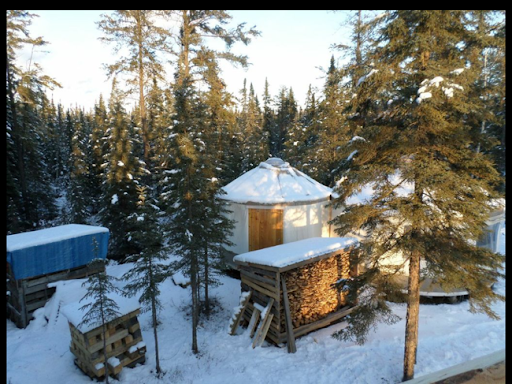 I am told that early next week the fellow will come in to apply the spray foam insulation.  This will be another exciting moment!  (I’m curious to see if I get any spammy spray foam insulation comments after noting this sentence…  I’ve been noticing some context-correct spam appearing in comments on the blog.) 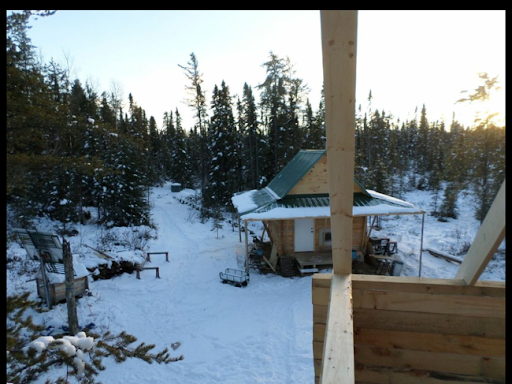 By the end of next week the steel should arrive for the roof, and then we’re really in the home stretch!  The floor needs to be insulated, and the wood cookstove installed, but after that, we should be green-lit to move in!  (Donna willing…)