Ugh.  After a night of fourteen degrees below zero, in the late afternoon, Donna headed out to the sauna in her cold weather gear to attempt a load of laundry. 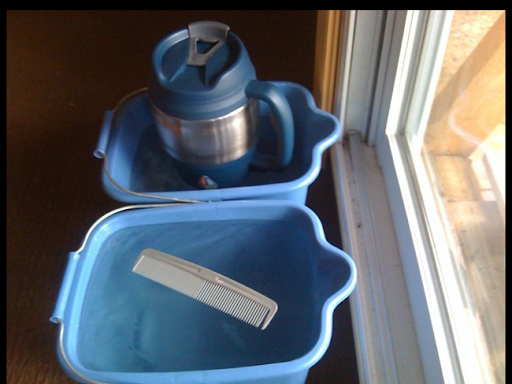 She returned shortly after with photo evidence of how cold it was.  The water pails had frozen.  Sigh.

At first I didn’t register any concern.  It wasn’t until I went out myself and realized that the water pipe had frozen that I began to feel a bit of panic well up inside me.

I rushed over to the cabin first, to test the water line from the sauna to the cabin which had been constantly dripping for the past month.  Thank goodness, it was still dripping.  I opened it up and let some good water flow through for a few moments before capping it back to a slow drip and returning to the sauna.

I put on a roaring fire in the sauna, and then broke the ice in the pails.  Using ice cold water, I started the Panda washing machine and got it to agitate a moment.  Hearing some of the chunks of ice banging around inside, I quickly stopped the machine and waited an hour or so for some warm water to be present in the sauna stove’s holding tank.

I poured this water into the Panda to melt the ice, and then resumed the load.

Imagine my annoyance when I tried to switch it to “drain” mode, and the dial was also frozen.  Forcing it slightly, the knob suddenly banged, and then I could spin it freely around, obviously not engaging anything.

This brought me nearly to my knees with frustration.  No water, and now no way to drain the washing machine!  What else could there be?

I pulled off the knob, and saw that the cog underneath had somehow “fallen” lower than the knob could reach.  Retrieving my needlenose pliers, I pulled it up, and switched it to drain.

The Panda groaned under the strain, and no water moved.  I check the hose underneath and – you guessed it – frozen solid.

I bailed the water out by hand, and then moved the clothes to the spin side.  It spun for a moment, and then it too started to groan.

It appears that the two sides of the machine have separate reservoirs.  Something that should be obvious, but wasn’t always so to me.  Whenever you are spinning, the spin side tried to drain water.  So the drain pump was straining to pump against the frozen hose.  Also, as soon as enough water builds up in the spin side to reach the basket, the friction of the water is far too much for the spinner to move at any great speed.  Thus, I couldn’t spin the clothes.  They were coming out of the machine soaking wet and freezing.  Pieces of ice were still falling from them at that point!

I pulled the hose up as high as I could, restoked the fire, and was mildly happy to see that the faucet was finally drip…  drip…  dripping.

By about six-thirty in the evening, the faucet had thawed, and I could get water.  The washing machine had made all sorts of awful sounds, and I was fairly certain I had killed it by pumping against the blockage for so long, not to mention washing clothes with chunks of ice in the agitation side.

When it was finally pitch dark, I decided to call it a night and go in for supper.  As I left the sauna, I tripped heels over head on the wagon that I had so unwisely left at the bottom of the stairs earlier in the evening.  Great Grandpa Higginbotham would have been proud of my attempts to not take the Lord’s name in vain. Instead, I just made up a few new words.

Back in the yurts, Donna nourished my body and spirit with both soup, and kind, supportive words.  I decided to make use of the warm sauna and go out to wash my face and hair after eating.

Once there, I attempted one last try at draining the washing machine, and, lo and behold, it worked!  I quickly raced outside in my boots (and little else) to start up the generator again, and banged off a few loads of laundry while I could.

With the pliers, I pulled up the cog for the wash/drain setting, and put the dial back on it.  As of a few days later, it is still working okay.

While the Panda cannot seem to properly agitate our largest, flannel blankets, I am still quite happy that we have the ability to wash most of our other items.  However, it is difficult to resist the temptation to overload this little machine.

Donna has been using a home made liquid detergent she has been making with soap nuts.  Occasionally she doesn’t even bother with a rinse, as this detergent is suppose to be very mild.  This saves us on water, time and electric power.

I still would recommend the Panda to anyone in our situation, and would readily replace it if it were to be retired in the future.

In any case, I spent the next day redoing the framing around the sauna doors.  I removed almost all of the existing framing, and as I replaced it, I added surplus sill gasket and some leftover Roxul insulation.  I also made sure that all openings were covered as best as I could to keep out any draughts.  I had a fire burning most of the day, and put on the final log about three-thirty.  Donna went out as late as seven to wash her hair, and reported that the stove water was perfect for washing!

Now it remains to be seen just how often we need to fire up the sauna to keep those lines open.