Well, it had to happen sooner or later I suppose.

The switch for the pump was originally a simple on/off switch and I had anticipated that whoever turned it on would carefully monitor the water level in the tank and switch it off in an appropriate manner.

After a number of times whereby I was distracted and then with terror in my heart came back to find that the tank was nearly overflowing, I decided to change the controls to a timer switch.  Now whoever was pumping the water could simply elect to run the pump for five, ten, fifteen or thirty minutes.  Thirty minutes maybe if the tanks were both completely empty.  Five or ten minutes being much more likely options.

That is, until the pump was set for about five more minutes than it took to fill the tanks, and we were suddenly treated to the sound of water falling from the ceiling and into the change room.  Augh!

Shortly after, I decided that we could no longer trust ourselves to accurately predict how much water we should pump into the tanks.  My solution?  An overflow hose leading any excess water to a harmless location.

I was reluctant to run a line down the outside of the wall and to the laundry tub – my first thought.  Upon climbing into the loft with the water tanks I was presented with another option – I could still drill down from above and run a small line down the inside wall to the floor.  There, we could have it harmlessly drain onto the floor and over to the drain in the steam room. 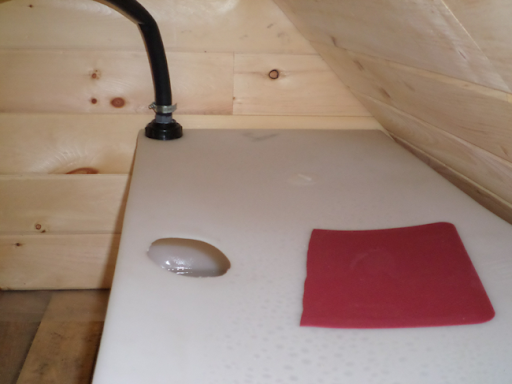 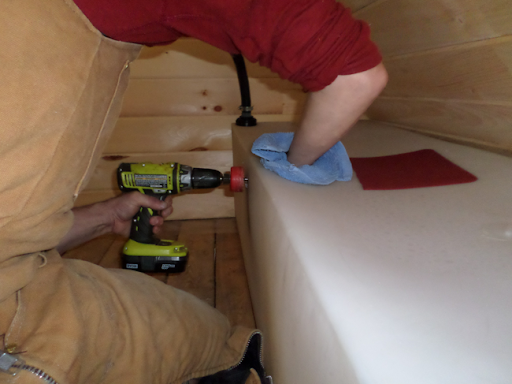 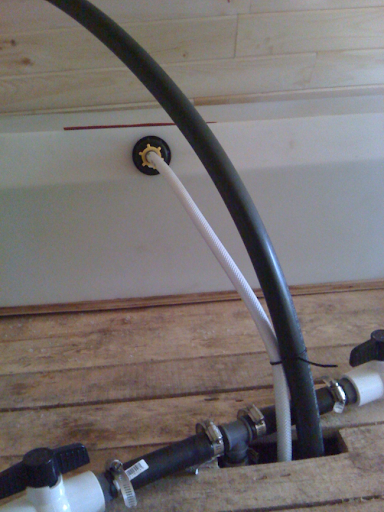 After one or two test runs, I found the sweet angle for the hose, and called Donna in to help me snake it inside the wall and out a hole I had pre-drilled near the floor.  When I add a baseboard all around, I will make the drain hole even smaller and have the hose snugly extend out and down towards the floor drain.

Now, although I’d rather not use it, we do have the ability to run the pump with much less supervision than before.  While I was up there though, I did take the time to mark the “danger” level on the side of the tank so we would have better feedback.