With Papa’s final guidance and assistance we began work on getting the floor installed in the cabin.

At right angles to the laminated beam in the upper reaches of the cabin, I had put in some small footings to hold up the ends of my floor “sections”.

Much like in the sauna, I had envisioned building the cabin floor in four sections, each about ten feet by ten feet.  I figured that these would be more manageable, and then we could simply drop them into position after putting some OSB on the bottom to hold in the insulation, and keep out any pests.

The four sections would then be screwed or bolted together, forming a “cross” in the middle of the cabin of doubled up boards.  It would be one line of these boards that would rest on the piers.  Or so I envisioned. 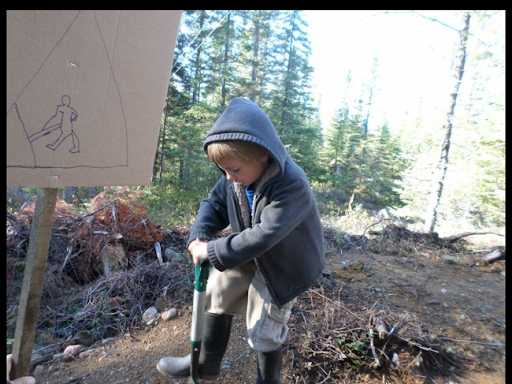 As we were beginning work in this area, I was impressed to see that Kenny had taken safety to heart, and while working on his own project, had put up a “men at work” warning sign that the had created himself from memory! 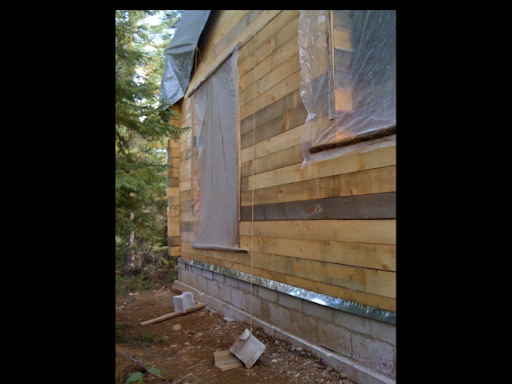 With the window and door openings temporarily covered to keep out the elements (to a small degree), it was time to get cracking!

Papa pointed out that it wouldn’t be so hard to actually install a beam across these piers, and then rest my floor joists on that beam.  Very strong, and just as easy to do. 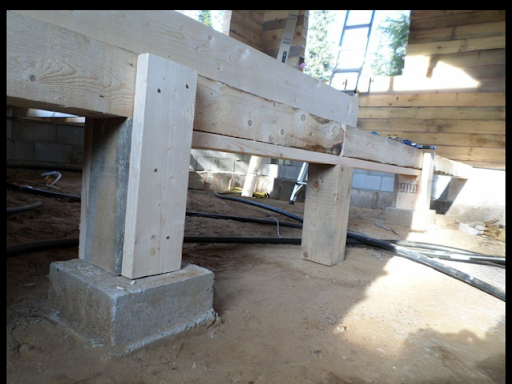 Thanks to my sawmill, I was able to cut up two beams at the right size, and in short order they were transported to the cabin and installed across the footings flush with the bottom of my (at the time imaginary) floor joists. After this, the floor went in quickly enough.  We built the floor conventionally, opting to use joist hangers where the ends of the boards were not resting on more than an inch of either concrete block sill, or the interior support beam.  Because the span was just a shade over ten feet, I felt that two by six construction would be sufficient.  This would give us slightly more head room inside, and once the plywood and then (pine?) flooring was installed, I didn’t feel the floor would be noticeably bouncy. 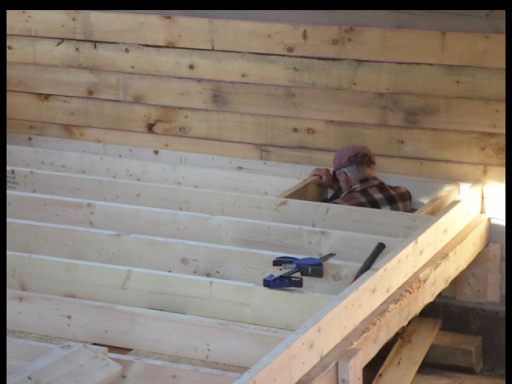 While I had originally thought that we could build in a manner similar to the sauna, where we construct the floor similar to a wall, and then lower it in place, Grandpa was more inclined to build the floor in place.  Then he amazingly would slide under into the crawl space to install the sheets of OSB from below.  I would have found it challenging, but he sure seemed to take to the job.  I suggested many times that I would go under to do the grunt work, but he brushed me off.  (Or perhaps I didn’t insist hard enough?) 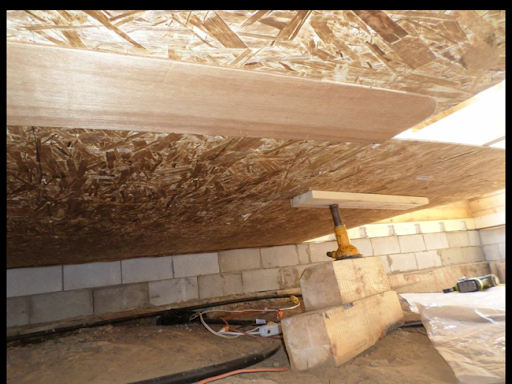 One caveat I would provide to anyone in a similar situation though – when someone is below the floor using a brad nailer to attach OSB – don’t spend lots of time directly over them.  After a moment or two of trying to help guide Grandpa in accurately hitting the studs, I realized that his misses were potentially hazardous to my health!  From then on I ensured that I was a few feet off to the side of where he would be aiming. 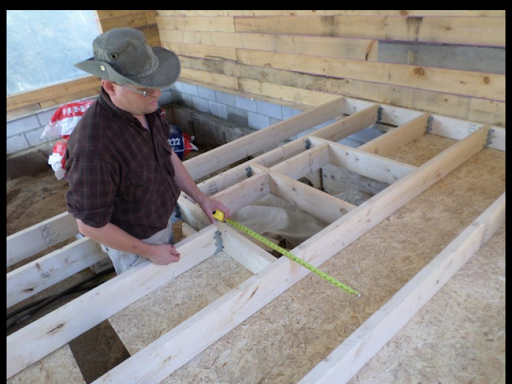 After two or three days, we managed to get all the joists in place.  I put in two spots for future trap doors.  One to access my batteries from my solar power system. (I have subsequently decided not to keep the batteries indoors.  My solar panel expert feels that there would be too much potential for a buildup of hydrogen gas down there.)  Also, another double trap door in the pantry to give Donna a chance to store things in a cool/cold place.

Until the roof is in place, I have only lay down the cover layer of plywood loose.  I don’t think I should insulate and vapour barrier until I’m sure that things won’t get wet. 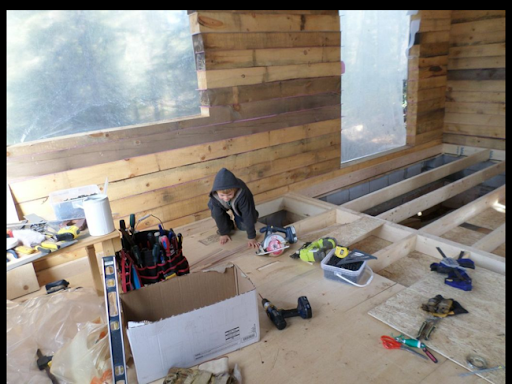 It’s amazing how quickly your tools and odds and ends expand to fill whatever space you create for them!