With the conjunction of the sauna becoming useable both as a sauna, and an extra space for guests, the next logical step was to begin work on the cabin.

This coincided with the arrival of my parents, and then both my brother and sister just a few days later.  Fortunately my parents visited us bringing their tent trailer and two large boxes of galvanized 10″ spikes.  They had good accomodations even if their heater gave them the occasional troubles.  At least they weren’t still here when the snow began to fly! 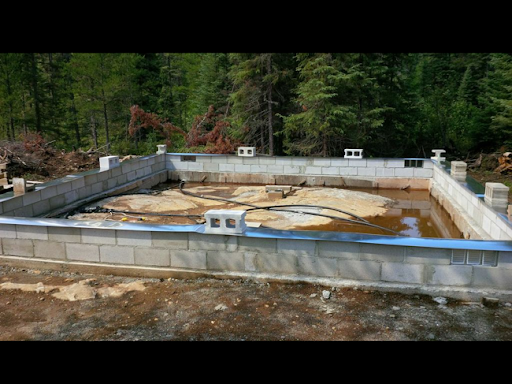 I had contracted out the laying of two runs of cinder block to a local fellow, and his work was completed and dried by the time everyone arrived.  (Although there was still standing water inside the foundation.) 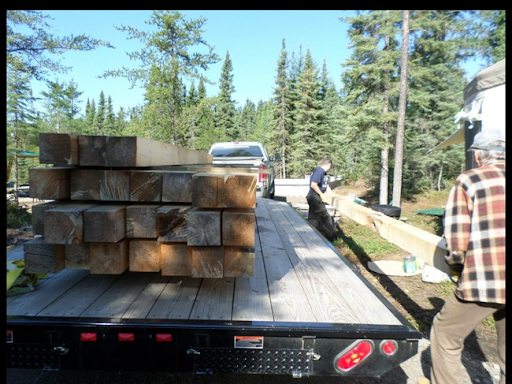 Over the course of construction, I ended up taking delivery of one hundred and twelve white pine beams.  Each of them measuring six inches by six inches (plus or minus about an eighth of an inch) and sixteen feet long.  I have to admit that for someone with little experience driving a large trailer, this was a bit stressful, but with my father and brother’s help, I managed. 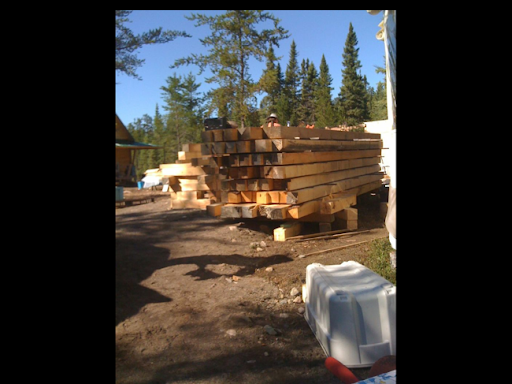 With our materials assembled, it was time to confirm our building practises, and then get to work! 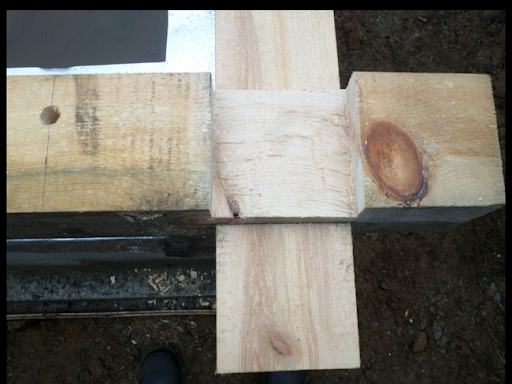 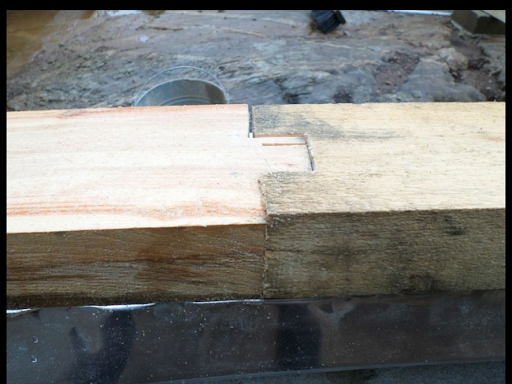 I confirmed that the outside footprint of the cabin was to be twenty two by twenty two feet.  We also were going to strive for six inches of overhang at each corner where we would cut in a simple mortise joint.  Where logs needed to have a butt joint, we would cut a tongue and groove of about two inches.  Each run would have a layer of five and half inch wide sill gasket installed (sometimes two or even three layers if there was a noticeable gap due to variance in the height of differing beams).

Each beam would be spiked down at each end, as well as approximately every three to four feet, also being mindful of butt joints on the run below, where we would ALSO spike on either side of the joint.

My lesson learned from the sauna was that there was a dramatic amount of labour involved in trying to cut and insert splines in the beams – and as often as not, they actually reduced the quality of work, in that they sometimes would force a beam to rest unevenly on the beam below.

Otherwise, we were rather similar in approach.  The corner joints as a mortise rather than a dovetail would work well, and the fact that my plan included a full wraparound porch meant that the ability to shed water was greatly diminished, if not eliminated!

With my beams at sixteen feet (generally six to twelve inches more than this actually), we were able to use a full beam, plus a half beam, to get us to twenty four feet.  Then trim off rough ends, or the occasional broken or rotten end, and we got down to twenty three feet in good order. 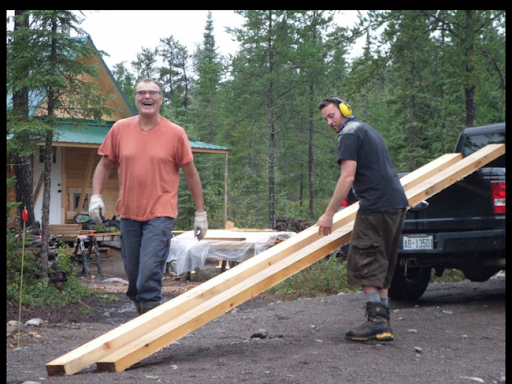 Working together felt really good.  We fired up two circular saws set at slightly different depths (one at an inch and a half for the mortise grooves, and the other at its maximum depth to try to cut through beams completely) and began churning out the first row of beams. 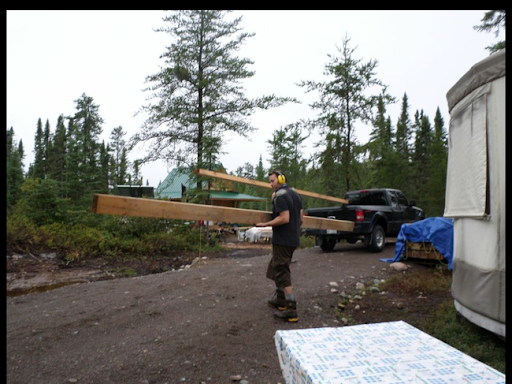 Mentally setting the bottom of my door frames at nine inches (six for floor joists, and then two more for actual flooring materials) seemed about right, so on the second run we notched the beams at the preset spots for the doors.

While Donna and I had spent many hours going over plans, I am pretty sure we both understood that they were just guidelines, subject to the realities of construction materials and techniques.  Many things were unknown going into the project.

A few of the guidelines we had going in, and that we tried to maintain during construction were based on the structural properties of a log wall.  As such, we kept all breaks in the log walls at least three feet in from the outside corner (so basically from the inside, there are always thirty inches of solid logs coming out of a structural corner).  We also insisted on the same three feet between breaks in a continuous wall, so there would be at least thirty six inches of log wall between a door and window, or combination thereof.

Another consideration that happened basically during construction was related to window and door sizes. It is tremendously more thrifty to purchase windows and doors in standard sizes if possible, rather than custom ordering them to fit your openings.  So we went with a standard door, two standard patio doors, and then the remaining windows in regular sizes of three feet by three feet, and five feet by four feet.  Two tiny windows were also standard stock, although they were eighteen by thirty.  Strangely enough, the eighteen by thirty windows cost about thirty dollars more than the three by three windows.  And yes, they both were openers, although the larger ones were just sliders.

The main guideline I tried to stress was for everyone to be safe.  We were very blessed in that no one suffered even a minor injury on this project. 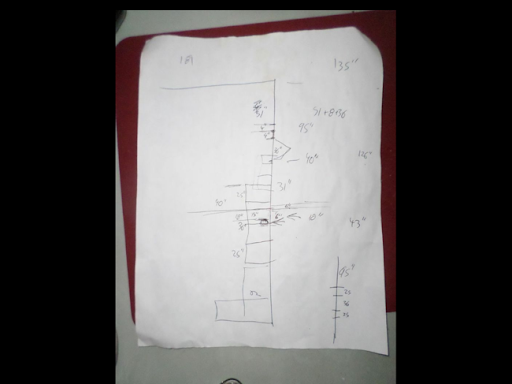 With the first run in place, I had to go off to work for the next day and leave my brother and father to all the fun.  Staying up with my brother and enjoying a quiet beverage (or two), I sketched out the remaining blueprints.  Google sketchup they weren’t, but they served the rest of the construction quite admirably.  It’s fortunate that Donna was wise enough to snap a few pictures of them before they were recycled. 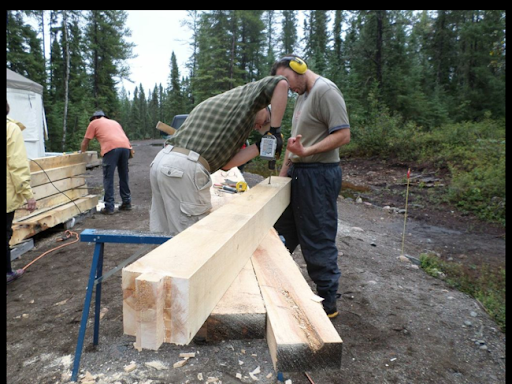 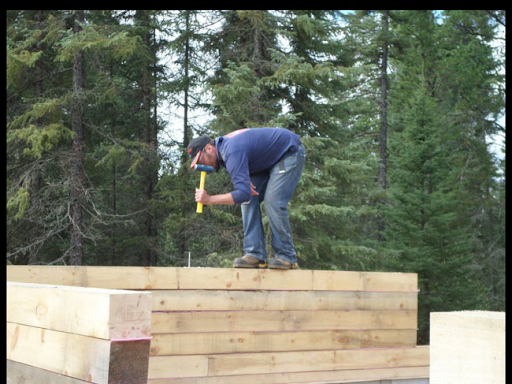 Sadly, my brother had to return to his life in the south all too soon…  Just as we reached the three foot, nine inch mark – where we began cutting in the windows.

I wanted the windows to begin fairly low to the floor after my work in the sauna.  There I kept the windows fairly high (for modesty), but then it transpired that they were overly shaded by the porch roof.  While I am willing to accept this in the cabin, I’d like to keep it to a minimum.

It was doubly troubling to have my brother leave, as he was another strong back for the hoisting of the beams, which began the next day. 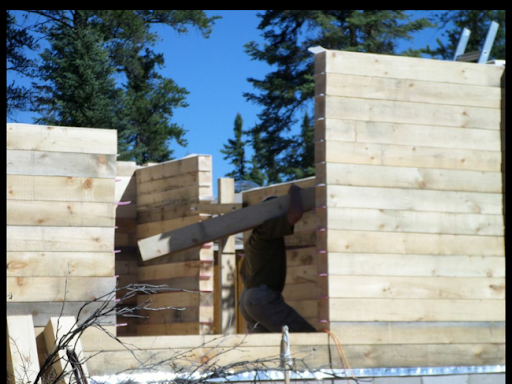 We had mulled over a few different schemes for hauling the beams higher, and higher up the wall.  I wanted an emphasis on safety, but expediency was also important.  It was fortunate that my back and co-ordination permitted me to haul beams approaching the seven foot mark on my own.  I directly attribute this to my aikido training, as I discovered that it was very similar to koshi nage, or ganseki otoshi.  You had to quickly feel for the beam’s hara, and position it above your own.  Then the weight of the beam would tend to merge with your own, and you could go about your business normally.  I even utilized this to move much larger beams over level ground, but didn’t have the courage to climb a ladder with more than a half beam. 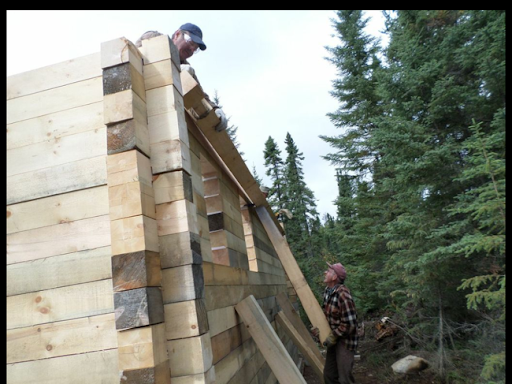 Finally, we settled on a system that worked remarkably well.  We would arrange our ladders on the inside of the walls, one at each end of the beam, and then throw a rope over the wall and tie it to the ends of the beam.  My father at one end of the beam, and myself at the other, we would count down, and then pull the beam up together and position it on the wall.  I insisted that we also screw in some temporary two by fours pointing up to the sky on each wall, to prevent us from pulling the beams right over the wall and onto ourselves.

With a beam in place, we would use my cordless drills to pre-drill a 3/8 inch hole.  Then pressing my four and a half pound sledge hammer into service, we would pound in a ten inch spike.  Finally a strip of sill gasket was stapled into place and we got ready for the next layer.

Door and window openings would be treated to an extra two or three inches on the sides, and two or four on top, depending on their height.  This seems to me to be generous, but at the same time, I wanted to be sure to be able to build a box “frame” around each door or window to attach the trim to for this year.  Nothing was to be directly attached to the sides or top of the opening, as I expect it to continue to settle for a year. 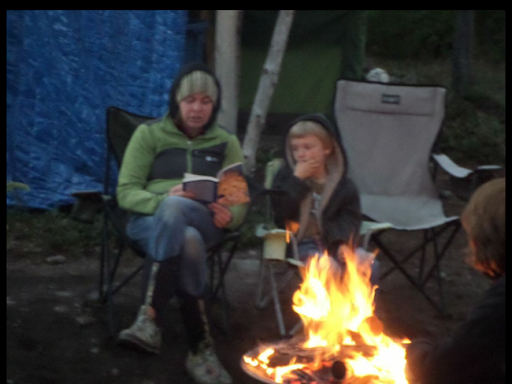 We worked away missing my brother, but he was well replaced by Grandpa who came by to pitch in.  Then the other shoe dropped and my sister too had to return home.  We hold out great hopes that she will be able to return again soon though, perhaps even during the winter, and certainly sometime with her “little girl” K!.  Kenny especially misses her, although just last night he received a lovely card, complete with a large wad of paper money that made his eyes grow VERY large. (Of course, the picture on the money was that of Sandy McTire.)

As we got above the height of the doors, I decided that I wanted some sort of beam from one side of the cabin to the other, to prevent the walls from spreading at all due to the future weight of the roof.

A solid beam would require a complicated joint, and to my mind wouldn’t be nearly as strong as a laminated one, so off to the lumber store we went, shopping for enough materials to create one. 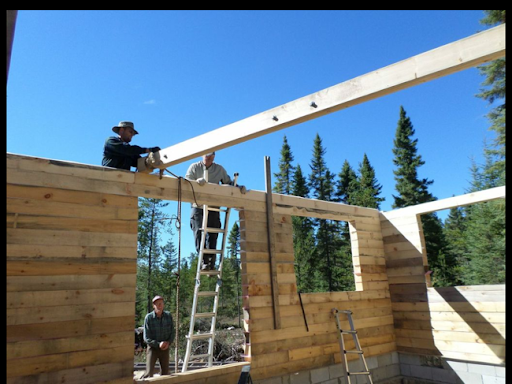 We settled on three two by eight boards, through bolted and laminated with industrial strength glue.  We were able to notch and insert this beam into the middle of the north and south walls without too much fuss at about the eight foot mark.  This was actually much higher than I would have intended – I was hoping to create more on the order of seven foot ceilings on the main floor, but I was also mindful of keeping the beam above the height of the adjacent door trim.

As the cabin settles though, perhaps the ceiling will come down an inch or two. 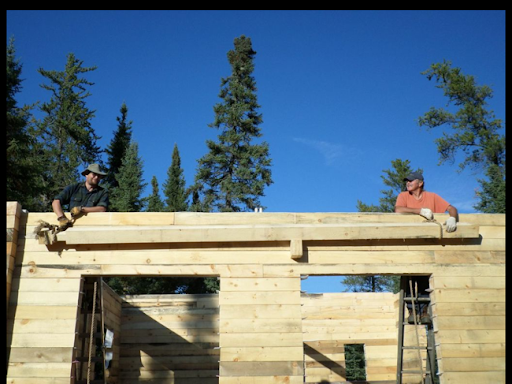 This beam marked the end of the main floor, and the beginning of the second floor (well, loft…).  I had originally only hoped for a six inch knee wall beyond the loft floor.  With careful calculations and fitting of the remaining beams, we were able to push that to a very, very welcome two feet!  This should make the upstairs rooms feel much more spacious! 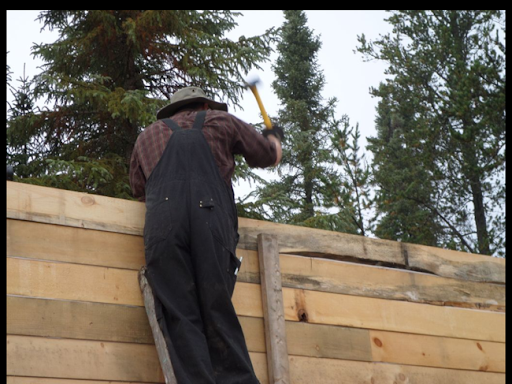 Just as we completed the final run of beams, my mom and dad’s time allotted for us ran out, and we bid them an (internally) tearful farewell.

Kenny passed along a traditional stink eye, and with a farewell “Ba-Ba-Boom!” they were off.

Much still needed to be done!