With great excitement we brought home from the city a real treasure – our friend B!  He had never been up to see the project before, and we were delighted to at last have him amongst us.

We had loads of fun (especially Kenny) hanging out together.

Walking to the lake…

Playing at the Marina…

The most fun of all for Daddy was working together again with his friend.  It was great to be able to commiserate again about our trials and tribulations. 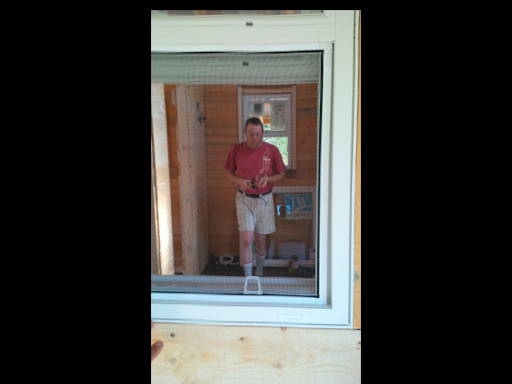 B! and I had spent a large portion of our working life together at ProMark Window Film and Blinds.  It was a great job, with great people there – I still dream about being back at work with them sometimes!

This time things were slightly different.  Instead of installing blinds or film on existing windows, B! and I were actually installing the windows themselves! 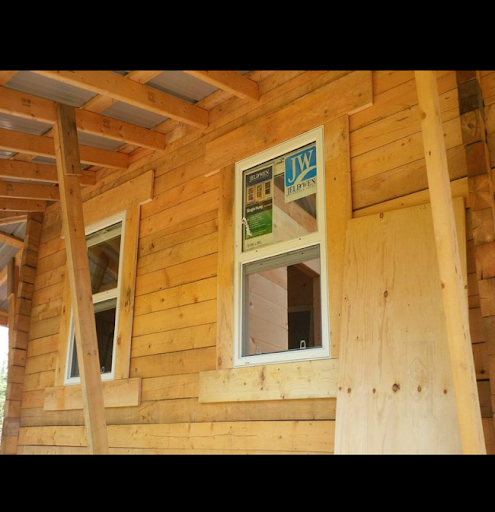 B! is exceptionally handy, and with very little guidance from me, had things looking really awesome in no time flat!  I think some of his trim work will be permanent, even though really it should be scheduled to be replaced next year when I add more v-joint and account for settling.

I’m not sure how we managed it, but we got the patio door onto and back off of the truck in what turned out to probably be the most difficult manner possible.  While picking up a subsequent patio door, a local that I know through work showed me the proper way to do it.*

We also picked up an exterior door for the sauna.  This was a bit complicated.  We wanted an outswing door to maximize space inside the sauna.  Apparently most domestic doors are sold as inswing doors.  I’m not sure why this is – I would have thought safety alone would dictate a preference to outswing, or even a requirement!  The lady at the store mentioned screen/storm doors, which perhaps makes sense.

Anyway, we wanted an outswing, so I made the crazy decision to take an inswing (also, inswing are far less expensive than custom ordered outswings…) and we installed it backwards.  I wasn’t concerned about the hinges on the outside – any thief would be bound to just smash a window rather than try to pull hinge pins I’m sure.  It took longer than I expected to puzzle out which direction to have the door open. As I age, things that came easily to me in my youth now seem to escape me.  In any case, let me save some of my readers a few moments of topological thought – it’s the opposite. 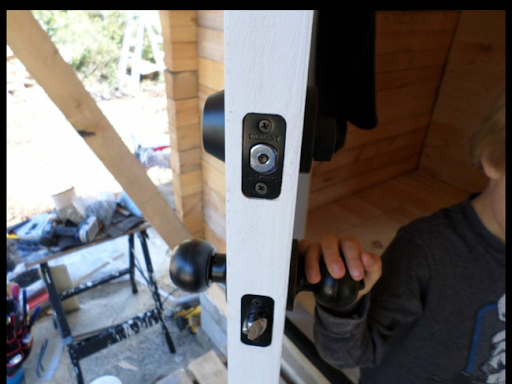 B! got the door in and working great in no time.  No one has yet noticed that it is in backwards until I point it out.

It was with a very heavy heart that we returned him to the aeroport for his flight home only a short time later.  We all hope that now that he has finally taken the plunge and visited us, he will be able to find time for us again soon!  He’s certain to be a lifelong pal for our whole family.

* Place the entire patio door centred in your truck bed with the panes both down and the empty frame facing up.  Then use your ratchet straps to go from each corner up to the frame, wrap the frame a bit, and then back down to the far side.  Do this up close to the cab and then back at the back of your box.  It helps to hold the doors at a bit of an angle when you put the first strap on, so as you ratchet it, it comes up to vertical in your truck bed.  Email for further clarification if required.