After listening to a discussion between Leo Laporte and Grammar Girl, I decided to follow the TWiT network’s policy of capitalizing every word in the title of an episode :).

With the wiring in place, I realized that it was getting increasingly difficult to pussy-foot around on the exposed joists of the floor, and so I opted to make the next step finishing the sauna floor.

First I boxed in and cut holes for the spaces where the floor drains were to be. 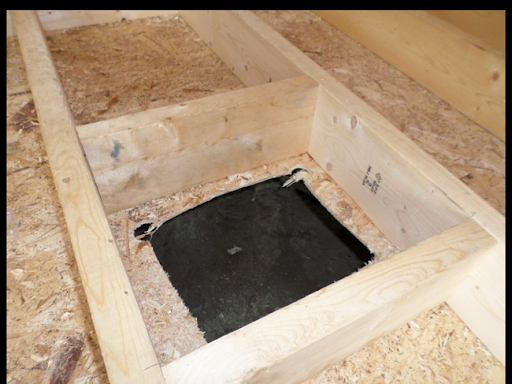 Then Kenny and I cut and fit batts of Roxul insulation in between all the joists.  The Roxul seems to cut reasonably well using my handsaw.  They specifically recommend against using a non-serrated knife on the packaging. 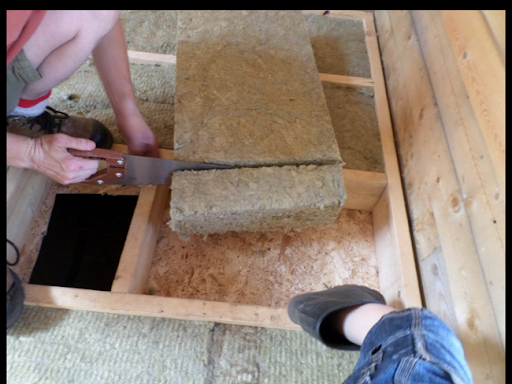 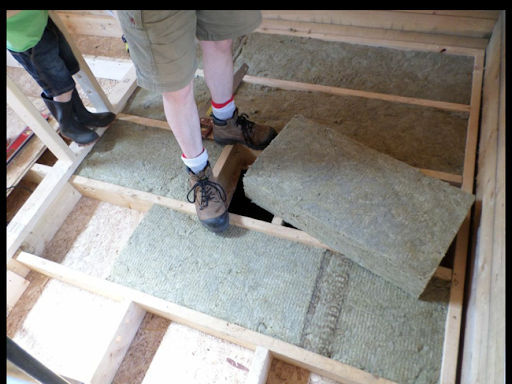 In the steam room and washing up room, I strapped around the outside edge of the floor using .5″ to .75″ slats.  Then put down the plywood and screwed it down tight.  Lots and lots of screws because it was deformed by the straps.  The strapping ensured that the floor sloped away from the walls and down towards the centre of the floor. 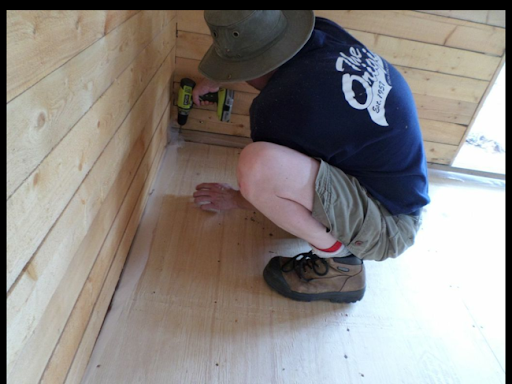 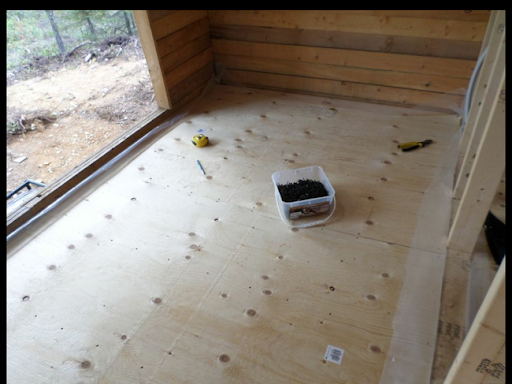 Kenny tested the slope with some of his marbles.  I suppose one could infer that Daddy has lost his. 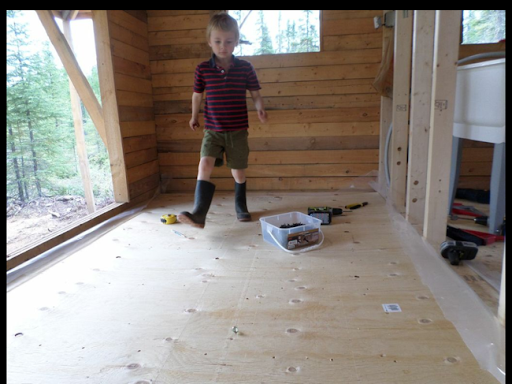 I drilled out a hole for a floor drain in the middle of the steam room, and then another one in the washing up room, although this time I placed it more towards the far end of the room, where we are theoretically going to be doing most of our splashing.  (I decided that at the laundry end of the room, we shouldn’t be splashing much water.  This has so far turned out to be an incorrect assumption!)

Over the course of a few days, Kenny and I painted over the plywood with Rustoleum’s “Restore” deck treatment.  It is some sort of really heavy and thick “paint” that seals wood and gives it a rather rough texture.  It is expensive, and doesn’t go far.  I needed about 8 gallons to put on two coats.  I still have about 2 gallons left, but I will save that to put on my baseboards when I come to install the final versions of those. 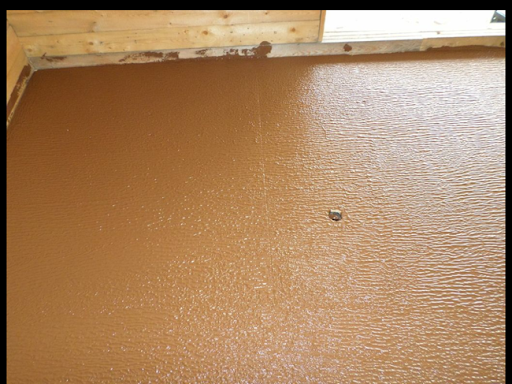 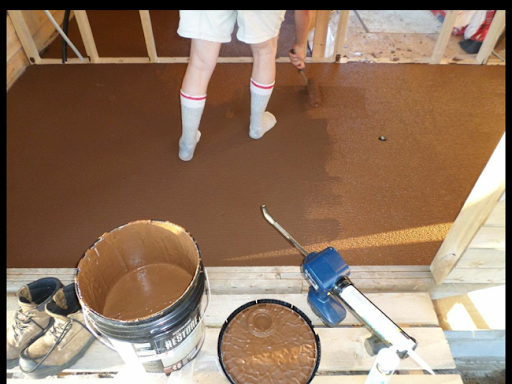 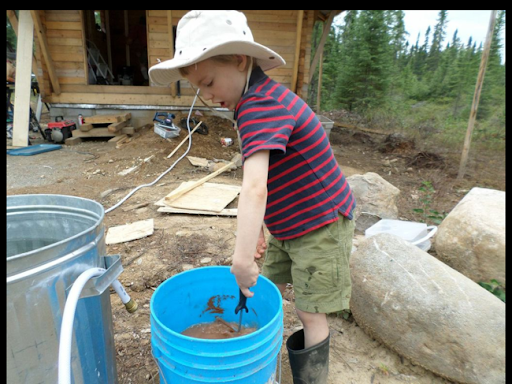 As I put down the second coat, I ran a bead of alex plus around the base of a drain, and pushed it down into the wet paint.  I even used my finger to run some of the paint up onto the edge of the drain. 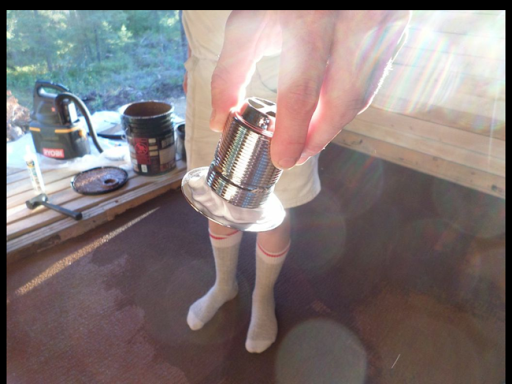 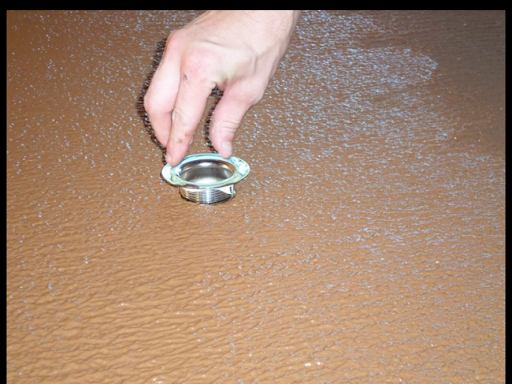 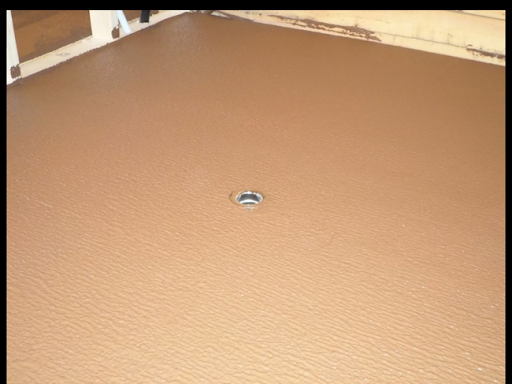 Surprisingly, I don’t believe I ever got any paint onto my socks! 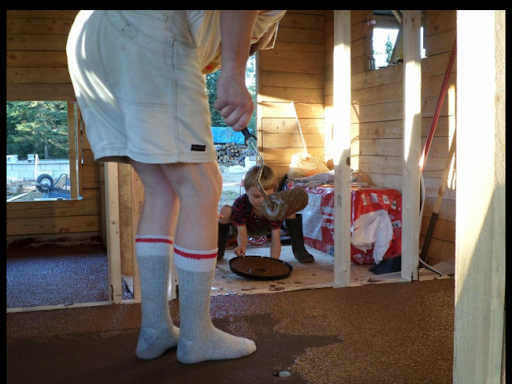 2 thoughts on “Finishing The Sauna Floor”