Still looking for sympathy from my recent surgery, I begged off working in the morning yesterday, and instead told Grandpa I would be a real go-getter come afternoon.

At the duly appointed time, we discussed a plan of attack, and it was decided that I would head up onto the roof, and Grandpa would cut and pass up the flashings for me as I required them.

I set my bar low for the day – I would be happy if I could get some or all of the flashings installed.  I figured that they were going to be the most difficult part of the remaining roof work.

First we cut the endwall flashings, where the steel roof meets the gable ends of the sauna.  Under these flashings I also stuck down some “large tab” foam closures, to ensure that pests and debris couldn’t make their way up under the flashing and against the sauna, or back under the porch roof. 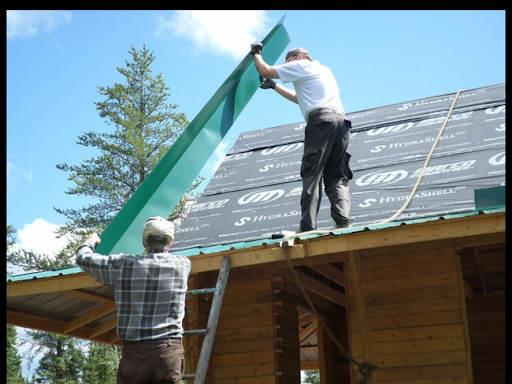 Then I screwed the flashing tight to the gable end wall, at about every other rib.  On the porch roof itself, I screwed through every rib. 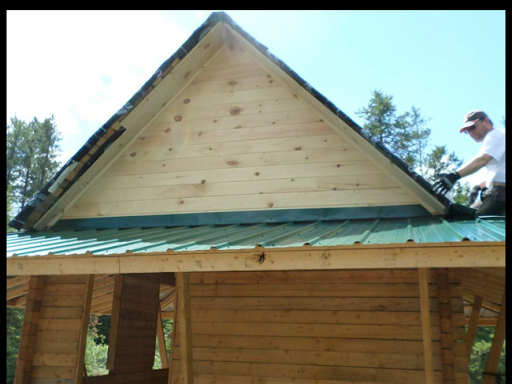 At the opposite gable, the flashing extended up into the window opening about a centimetre or so, but nothing unreasonable, and I’m not going to do anything about it until I actually begin installing the window.

This went marvelously smoothly, so we decided to continue on with the “transition flashings”.  These are the flashings that are suppose to take us from one roof pitch (12:12 for the main roof) to another roof pitch (a wild guess at 4:12).  I screwed down the porch side of the flashing first, which made the roof side stand up off the decking.  Grandpa and I judged this to be a minor issue, as the weight of the roof panels would surely press the transition flashing down flat against the roof deck – a prediction that later came easily true.

While we had extended the eaves of this roof out from the ends of the gables, we didn’t try to attach the overhang to the porch roof below.  I don’t see any reason to do this at all.  The porch roof extends under these eaves, as does the hip flashings of the porch roof.  I did run the transition flashing all the way from one end of the roof to the other, so at the ends of it, it is hovering over the porch roof for a foot or so, unsupported and unfastened.  I can’t see this being a problem, and it certainly isn’t an aesthetic problem. 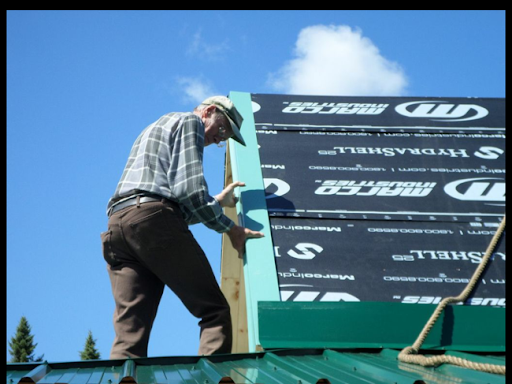 This flashing also went up with remarkable ease.  Grandpa was game to help me install at least one of the roof panels, so we carried them over to the sauna, and together hoisted one up and placed it on the roof. 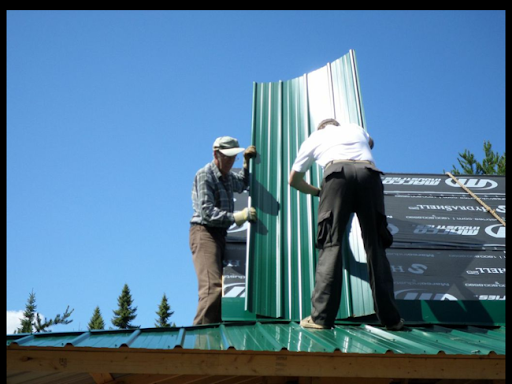 Carefully guestimating the overhang (a theoretical 1-2 inches) we squared it as best we could to the horizontal portion of the roof.  As I have already described, the sauna roof is not perfectly square, so we anticipated that the ends of the roof panels would not be completely parallel to the ends of the decking. 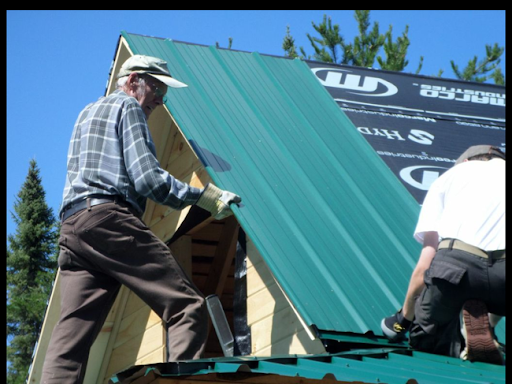 Also, under the first panel and along the gable edge, I installed a drip edge flashing to sort of box in the ends of the roof boards and v-joint boards.  This drip edge was surplus material in a more turquoise colour – but under the shadow of the roof panels it is very difficult to notice the difference, and it looks just fine I think.  You can look carefully at the pictures to try to pick it out if you like. 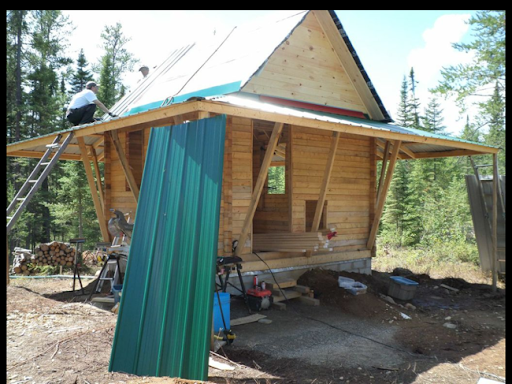 The panel went up well, but just to be sure, I only screwed it in with two or three fasteners along the bottom edge.

Grandpa headed down to terra firma, and passed up another panel which I set and fastened myself. 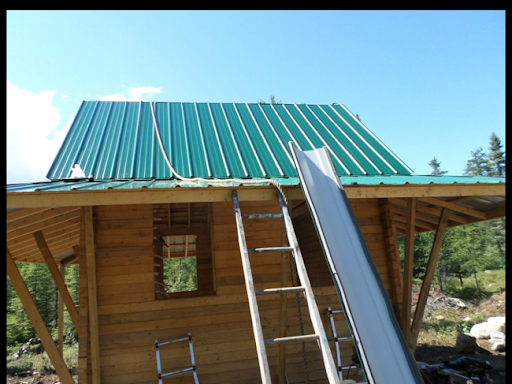 We continued in this fashion for the next four panels, at which point I had completed one side.  Of course, there was a hitch – the panels, while covering exactly thirty six inches as part of a group, are actually close to thirty-eight inches if you count the overlapping rib built into each one.  This meant that when I got to the front of the sauna, I had closer to four inches of overhang.  It was too much.

Our options were to cut off the last rib of the panel, or try to shift all the panels back across the roof to even out the overhang to more like three inches at each end.

Considering how difficult cutting a rib off and keeping a nice edge, as well as having to do it on both sides of the roof to make it symetrical, I opted instead to move all the panels backwards across the roof.

I installed this panel where I wanted it, and then went back to all my previous panels, unscrewing them and sliding them into a new position.  Thank goodness I opted to only put in two screws on each one!

This worked well, and set us up for the far side.  Now we had a better idea what the overhang should be, so that side went even faster!

Now Grandpa was on a mission, and began cutting up the ridge cap and foam to seal it up.  As he did this, I went back along the roof panels, adding many screws to hold them firmly in place.  On the gable ends, I put in a screw every twelve inches.

We took a break for a delicious supper at Mummu’s – her famous chicken and rice dish.  I had seconds, and then my stomach suggested I take a break.  My taste buds sure didn’t want to, and I regretted not gorging myself more later in the evening when I had returned to the yurts and began salivating again, thinking about it.  Oh well, we can’t nurse our regrets forever. 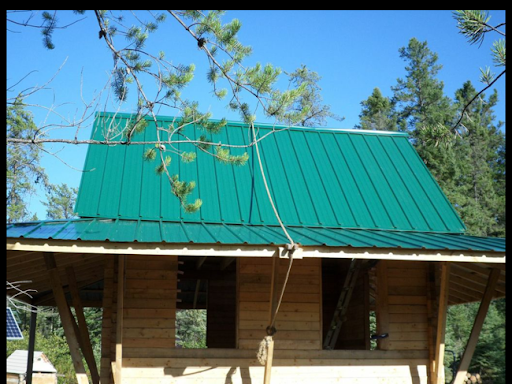 After supper, Grandpa and I returned to the sauna, and in short order I climbed up onto the roof, then used the rope to drag myself to the ridge.  Straddling the ridge, I couldn’t help but feel chagrined at how my hips complained about being held at a ninety degree angle.  Back during my aikido heyday, I could occasionally approach twice that! 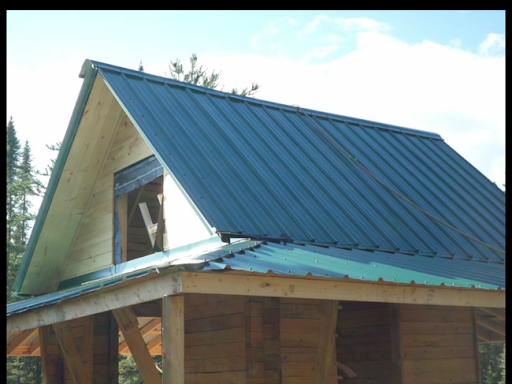 In any case, I put a screw on every rib to hold down the ridge cap, and had it fastened down in only a few minutes.

I think things turned out really well!  It’s almost disappointing now that we have a forecast that DOESN’T call for rain any time soon.  Likely the first time this summer we’ve seen that.

2 thoughts on “Finishing the Steel Roof on the Sauna”