Yesterday was miserable weather again in the morning.  Cold, grey, rainy, windy.  I spent the first little while typing up a blog post, and then finally ventured out for some chore that I currently cannot recall (empty slop bucket, take out chamber pot, get more sawdust, get more firewood, etc…)

As soon as I stepped off the landing, who should be moseying up the driveway but Grandpa.

He said that he had already walked by once but that things were quiet.  Usually he comes to the yurts and calls out something along the lines of “I guess you’re all asleep yet”.  I don’t think he’s caught ME asleep yet when he does this, but Kenny ALWAYS has still been asleep.  Kenny has trouble getting to sleep most evenings in the yurts – at least in summertime.  I think much of this can be attributed to the dome, which lets in light until after sundown, which is currently about 9:40 here (and beginning to accelerate towards the depressing 5:00 of midwinter).

If you have young children in yurts, you may want to find a way to enclose their sleeping area, or shade your dome, to help encourage nighttime calm.

Anyway, I was up, and Grandpa and I walked over to the sauna to inspect the V-jointed boards I had picked up from Howie’s Saw earlier.  As an aside – Wayne at Howie’s was kind enough to enlighten me on the difference between V-joint and simple tongue and groove.  V-joint seems to be more commonly used for walls – to my mind, it’s identical to tongue and groove, with the added profile of having a slight “V” cut into the inside and outside joints, so the boards slightly taper along each edge.  Simple tongue and groove is more for flooring, where you want a perfectly smooth surface.

Grandpa seemed to be leaning towards leaving off on putting up anything, as the wind and rain were not that pleasant to work with, but suddenly the wind died off, and he declared an intention to give it a try.  All day long he kept insisting that the wind was “suppose to calm down” – but it really didn’t until well after we finished. 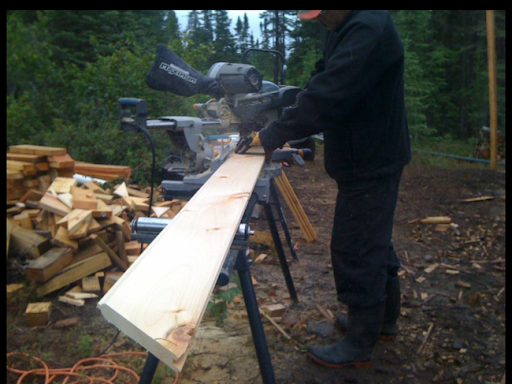 We cut our first piece of the wind and water shield, and stapled it into place.  So far, so good.  Then I cut our first board with a 45 degree bevel, and we headed up to install it. 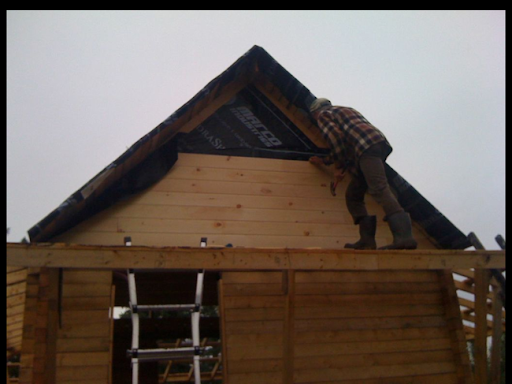 I’ve never installed anything like this before.  I did know I wanted to try to hide the nail heads as much as possible, so I put that to Grandpa, who was good natured enough to be willing to try.  This seems to involve installing the nails at an angle through the base of the tongue of the board.  (Tongue faces up, I assume to more properly shed any water or dust).

I didn’t have any regular nails, I only had a box of strips of nails for my as-yet unarrived nail gun.

Opening the box, I was rather bemused to see that they were more like glorified staples.  I showed them to Grandpa, and we decided to give it a go anyway.  We had to break nails off individually with a pair of pliers.  I also ran and got two of my punches, so we could set the heads of the nails. 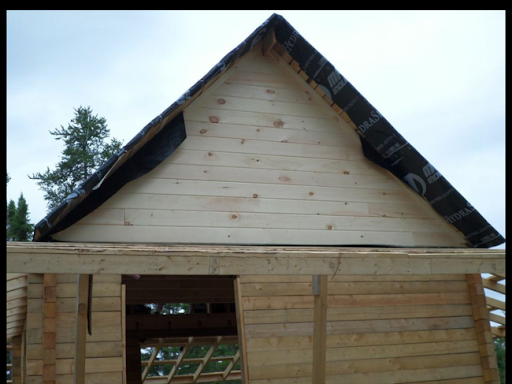 While the nails were given to bending with very little provocation, it went much better than I think either of us expected, and we managed to work our way up to the peak by lunch.  We anticipated an even easier time on the south side of the sauna, where we had framed in the window. 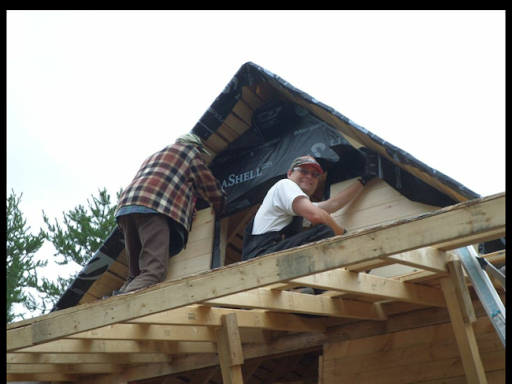 This was true.  It also had the added benefit of ensuring that we didn’t have to do any horizontal joints in the boards (save the very first one under the window). 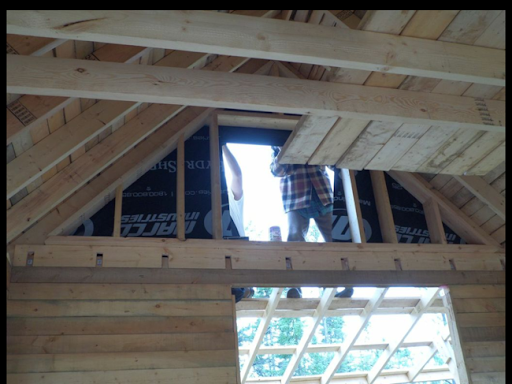 Once we got above the window, Grandpa took his leave, and I completed the job.

I had given him my slightly more useable nail punch, and as he was leaving, we both had to laugh when I unthinkingly offered to “trade punches” with him. 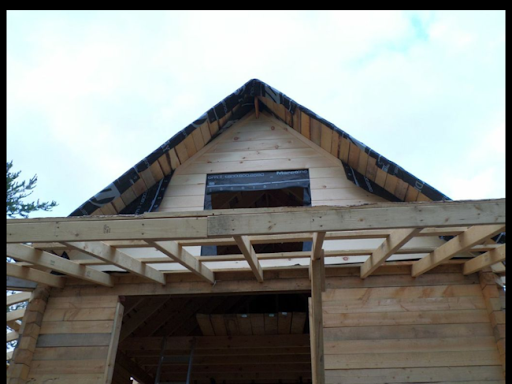 Along the edges of the eaves, I ripped two more boards in half and nailed them in place to cover the uneven ends of the V-joint.  I now plan to put up three or so more boards directly under the roofline, to cover the bottom of my own rough-cut 4″ boards.  This should cover up and clean up the entire surface nicely.

1 thought on “Installing V-Joint Without a Nail Gun”