As my “loyal readers” will attest to, I had loads of issues with the water line over the last winter.  Every time it froze in a different place, I ended up cutting a new access to it, and then adding a coupling and clamps.  Eventually the well froze where the water line passed through the water’s surface, and we were out of water for the remainder of the winter, forced to carry in all our water, and giving up on in-yurt laundry. 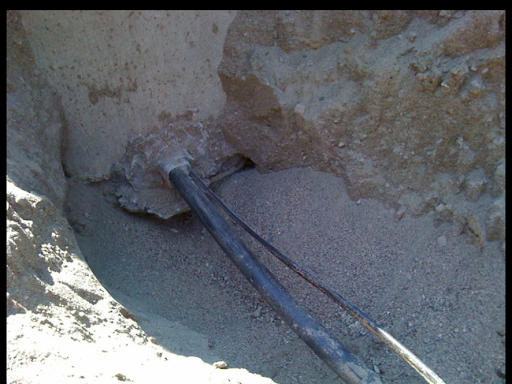 My general long term plan for our water system is to have the well pump up to the sauna, where I will have two storage tanks placed up in the rafters.  From there, a second water line will pass down from the tanks, underground to the cabin, and back up to the bathroom and kitchen sinks.  This will strictly be a gravity fed system.

I understand that the pressure will be rather low – but the sinks will definitely be at a lower altitude than the tanks in the sauna, so water SHOULD flow fine.  We don’t see a need for high pressure, just for running water.  Compared to how things work now, it will be an amazing luxury to be able to turn a tap and have water.

Running low on building supplies the other day, Grandpa and I decided to tackle the first phase of this improved water system.  I had purchased 12 lengths of 10′ PVC pipe, 3″ in diameter, and we lay it out loosely between the sauna and the well.  Then I threaded through this a new water line.  One 100′ length, joined to a 50′ length.  Alongside this new waterline, I added in a new electrical line, as well as the existing electrical line for the pump.  After getting the new lines run down to the well, we extracted the existing pipe.  I went down the well for the first time since February, and brought up the pump. 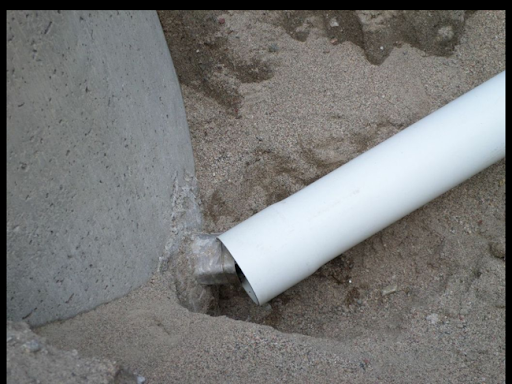 Disconnecting the pump from the existing hose, we passed the new electrical line and new hose through the hole in the well casing, and I connected up the pump to this new pipe.  Then I used some cable ties spaced out every six inches to fasten a 5′ length of heating cable to the lowest part of the water pipe.  There was enough cable to follow from the pump, right up to the well casing.  I’ve never seen more than 3′ of water in the well, and the hole in the casing is above the surrounding ground level, so I cannot see a scenario where the plugs would ever become submerged. 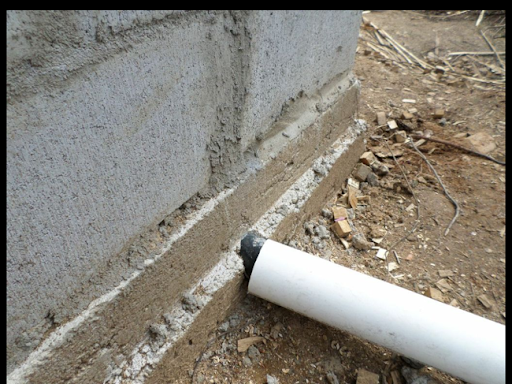 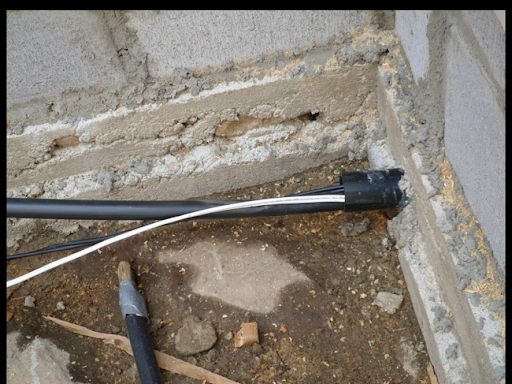 I connected the heat cable to the new electrical line I had run down, and then returned to the sauna to pass the electrical cables and water pipe through the footing and into the sauna building itself.

With this done, we connected the PVC pipes together, effectively gathering together the three lines, as well as supporting them and keeping them on a generally straight and level slope down from the sauna to the well. 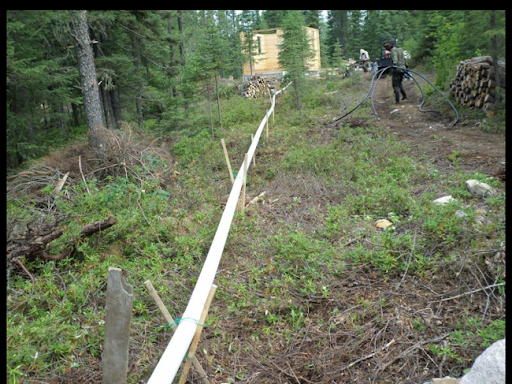 It wasn’t a perfect slope, so Grandpa and I hammered in stakes along the path from the well to the sauna, and then strung up the pipe to ensure a constant angle down to the well.  This again should theoretically allow the water line to drain out when the pump isn’t running.  Hopefully this will mean that there is no water in the line – which means no freezing up.  We will have to see how this works.  At least now we have only one coupling in this 150′ of line, instead of the five or six that existed by February.  It also meant that there wasn’t a 90 degree bend in the line inside the well casing, as had been the case previously when I wasn’t sure if the water line could handle the turn radius inside there without kinking. 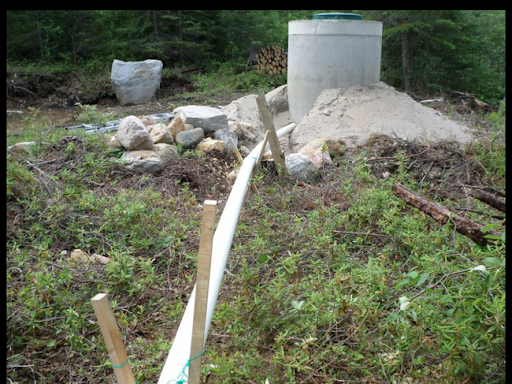 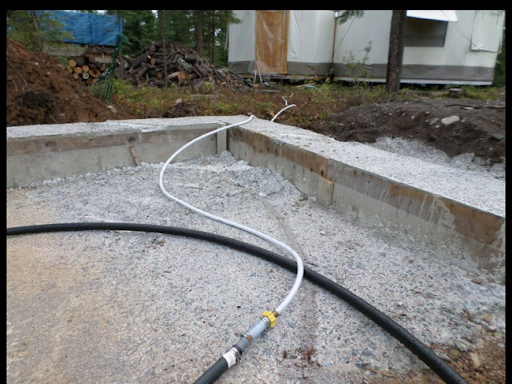 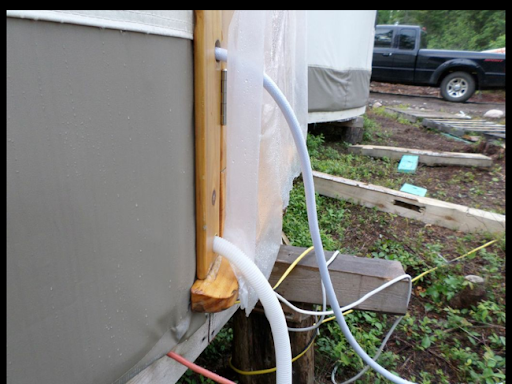 With water this close to the yurts, it was an easy decision to hook up my RV water hose to the cabin outlet, and then push it through to the yurts, so we could once again have running water in the yurts to fill our washing machine.  Yeah! 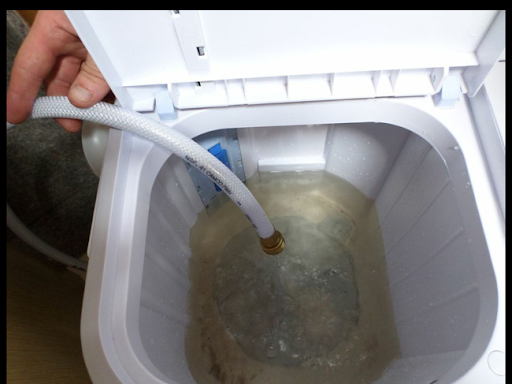 This is just temporary of course.  Ultimately it will include the tanks and the sinks, but for now, it is a big step up from having to carry four buckets of water from the sauna site to the yurts for every load or two of laundry. 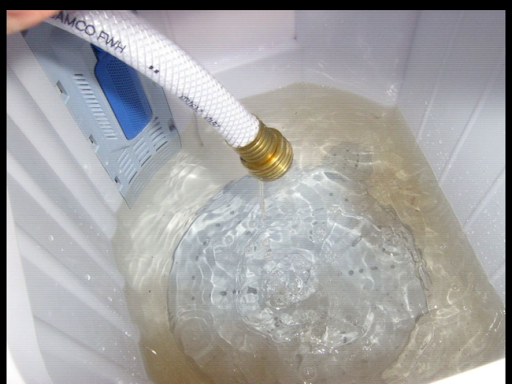 I’m sure some wags want to point out that PVC is not stable in sunlight.  I wondered the same thing, so I was sure to pick up some paint at the same time as I picked up expanding foam to seal the ends of the PVC against water/pest infiltration.  A nice, dark green to help blend in a bit better, as well as to absorb sunlight in winter and keep the pipe perhaps marginally warmer. 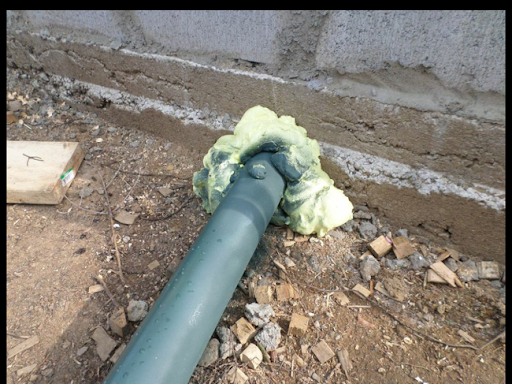 For now it works as expected.  The true test will come once the mercury drops below zero.  Only a few months away – and us without even a foundation in our cabin!  I have to get back to work now! 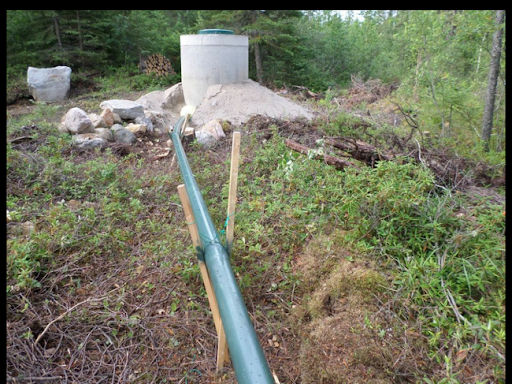