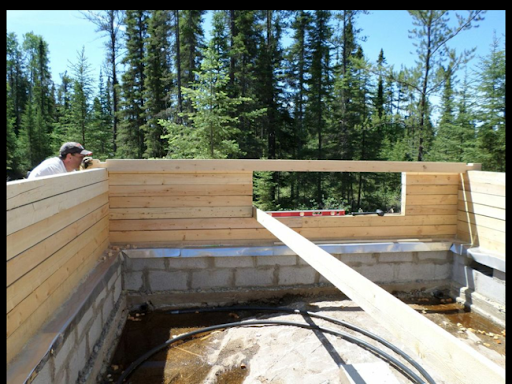 After more than two weeks of solo work on the sauna, I had just managed to prepare enough beams to pass over the opening for the sauna stove.  I had put in place the spaces for both doors, and was using one of my best looking beams to square everything up. 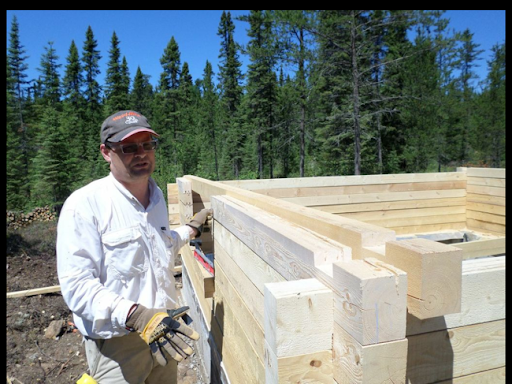 As always, I was quite prepared to pontificate on my techniques, thoughts, and tribulations.  At about this height, I wanted to get a better feel for how things were progressing, so I temporarily held off on adding the splines and insulation, and focused on just dry fitting the beams. 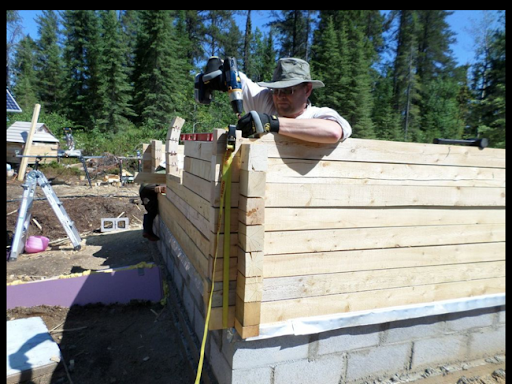 Often, I would run into a beam that was either twisted or warped, and I would have to get creative in finding a way to straighten it out.  I found that using a ratchet strap wrapped around the end of the beams and tightened down worryingly snug would help loads.  I would put in up to four screws in the notch under these circumstances. 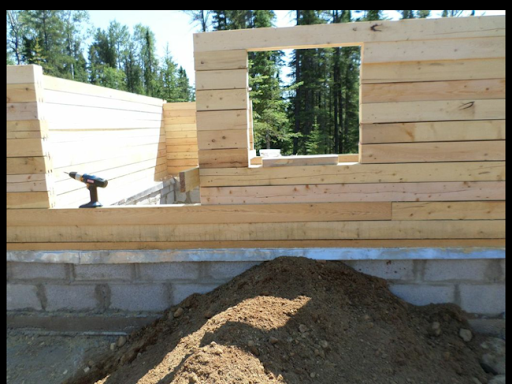 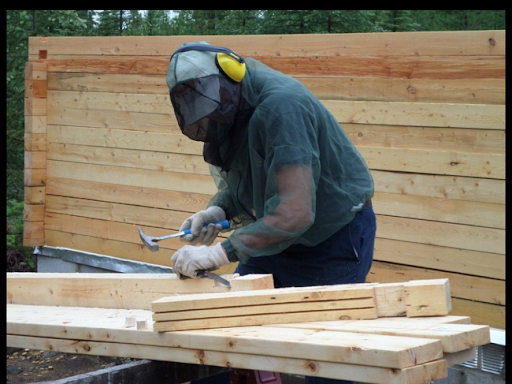 Being able to place a header beam across the gap for the sauna stove was a very satisfying feeling.  I had managed to keep the beams reasonably level and consistent up to a height of twenty four inches at least!

At this point, we were treated to a visit by my parents!  I had been looking forward to this for, well, a year since they last visited!  I had anticipated  that the bug season would have ended just as they arrived, but instead, it seemed to get some extra legs.  We were forced to don our bug shirts and nets to cope.  Papa jumped right into construction and we decided to prepare all the remaining beams for the project, and then do a rapid assembly. 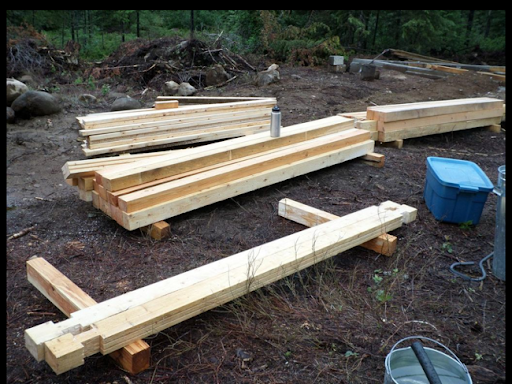 It was a great feeling when the final beam was completed and I could see the different length piles all waiting to be assembled.  I was a little apprehensive though about the amount of work and fussing that I knew remained to insert the splines and insulation and make everything remaining fit. 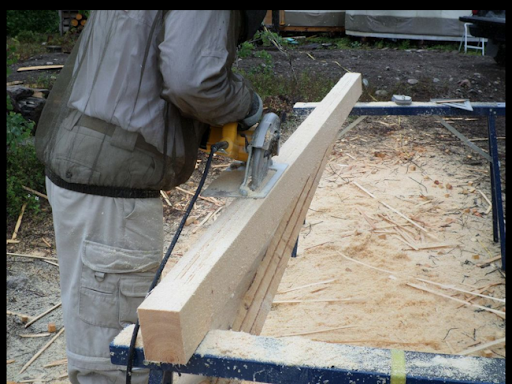 Cutting the grooves in the beams for the splines had taken a large amount of effort and time.  I was rapidly opening up to any sort of alternative technique for building this structure. 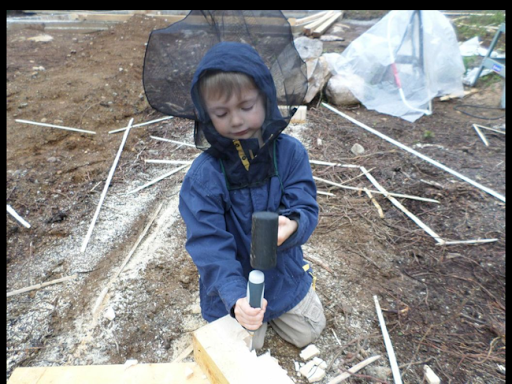 It was a really special moment when we realized that Kenny had developed his chisel technique so well and so rapidly that we could actually give him a stack of production beams to notch for us.  He really enjoyed helping, and his work was very much appreciated! 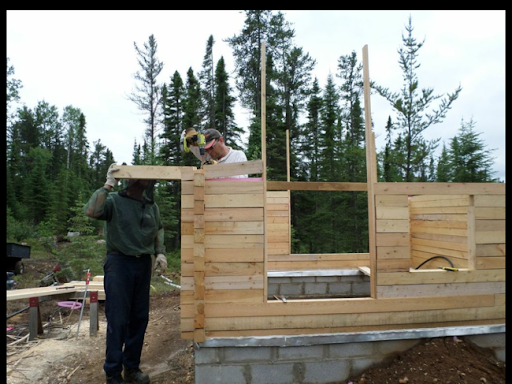 It was at this point that Papa and I agreed to completely abandon the splines.  I had been very dissatisfied with their performance.  They seemed to be causing more troubles than they would ever solve.  In fact, I suspect that they actually were working at cross-purposes to what I wanted them to prevent.  Marking them with a chalk line helped to keep them consistent and straight, but that meant that any warps or twists in my beams would not be able to be addressed without causing the splines to misalign.  Not marking them with a chalk line would mean that I couldn’t properly align them otherwise.  Catch 22.  Even when they did line up properly, any imperfection in either their length or height would prevent the beams from resting directly on top of one another.  My rush to assemble beams in a dry-run fashion before my parents arrived had shown me just how delightfully easy it was to interlock the beams sans splines.

And so with a bit of apprehension, we stopped using the splines and would instead cup a double-width of insulation and insert both edges of it into the grooves that were designed for the splines.  This worked amazingly well – the insulation held in place very manageably, and bulged upwards nicely to make good contact with the beam above.  We even had the option to install the insulation in the grooves on the bottom of some beams if we felt that would make for an easier install. 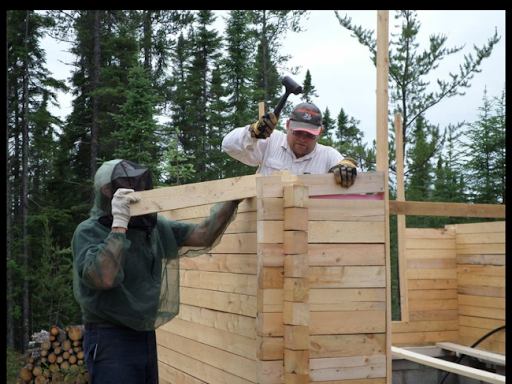 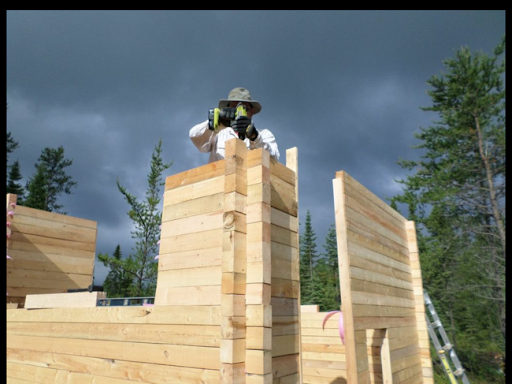 I placed these screws at about two or three foot intervals – wherever I felt that the beams could be tightend up together.  The walls went up much tighter, faster, and more level in this fashion. 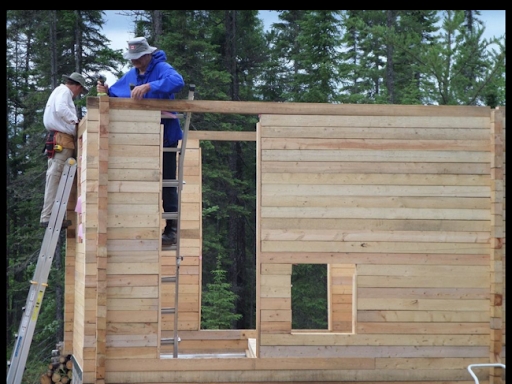 With storm clouds gathering rapidly, we managed to rush up all four corners, and then had to leave the rest for the final day of my parents visit.

That morning we headed out early and rapidly put up the small walls between my windows, and then began putting on the final header beams above the openings. 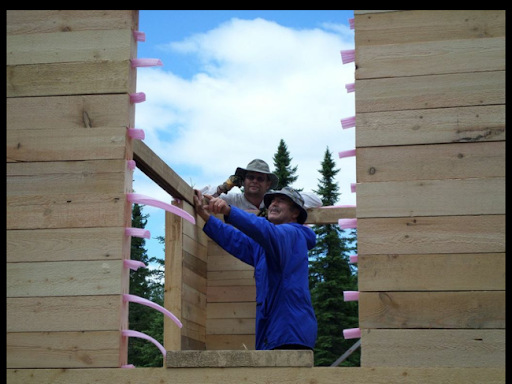 Frustratingly, the final full beam didn’t align over the back corner.  It seems that the door frame was a little bit higher on one side compared to the other.  Debates on how to hide this, or recut a beam into a taper ensued… 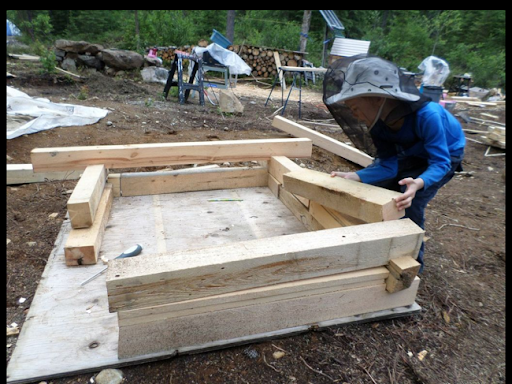 In the meantime, Kenny used his newly developed skills to construct his own solid log fortress! 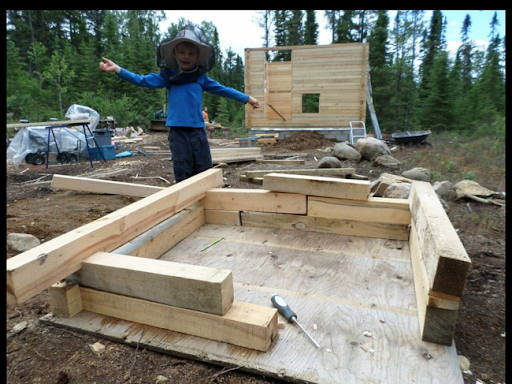 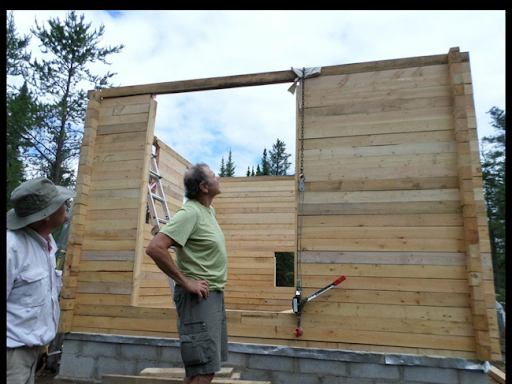 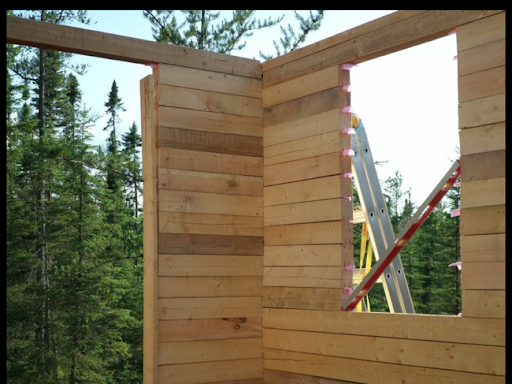 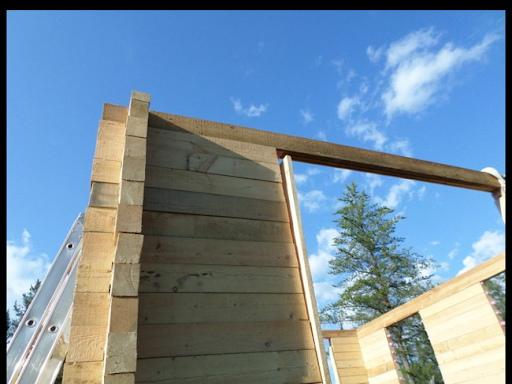 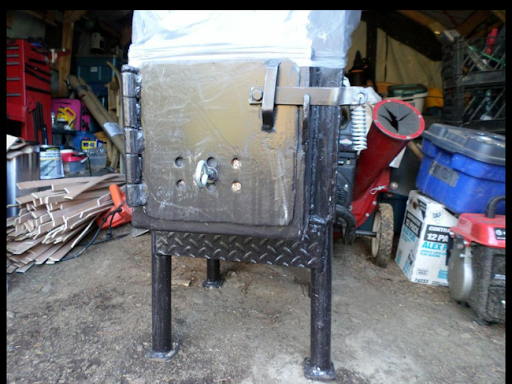 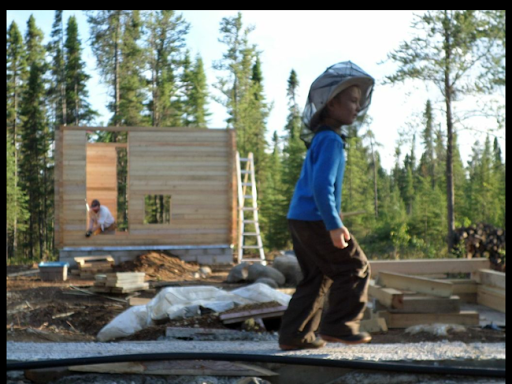 As the clock finally ran out on my parents’ time here, Papa came up with the excellent idea of drilling through the bottom beam (which would be covered inside and out by floor joists), inserting a pipe, and attaching a chain and comealong to it.  After delivering Nana and Papa to the aeroport for their flights, I returned to construction in a bit more somber mood.  A few cranks with the comealong and then a strap applied to the outside of the beam leveled things up perfectly and I completed the job in under an hour.  If only they could have stayed just a tiny bit longer!

It was great having them here though, and they got to preview the new sauna stove we had had custom made just for our specifications.  Kenny is very excited to see them again in September, when we hope they can stay even longer and Papa and I can put our new construction techniques to use on the scaled-up structure that will hopefully house my family soon.

Please forgive the formatting of this post.  I have been having a few problems with my usual posting app, and am testing the waters of a new one.