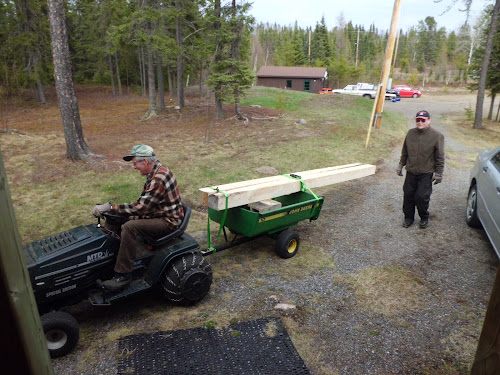 So, job one was clearing some land for both the yurts, and the sawmill. At first we divided our time between the two, but once the yurts were generally layed out, it was time to focus on the centre of our endeavour – the sawmill. After clearing off a suitable area, we purchased two, twelve foot long 6×6 beams from another local sawyer. It was a real challenge for Grandpa’s little MTD tractor and wagon to haul them through the bush, but, with me lifting the end so that he could gain the more than occasional traction, we managed to see it through.

It’s funny how things that look level really aren’t – we ended up having to stack a number of cinder blocks midway down the beams, and then I had to actually construct a rough crib of logs to hold up the really low end of the mill. 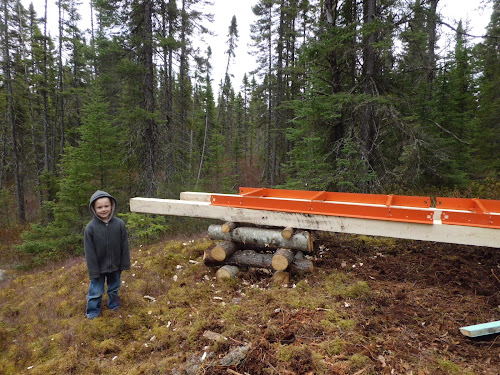 With the beams in place, we roughly assembled the tracks, and waited for things to settle. After a day of rain, we came back to shim and level things. 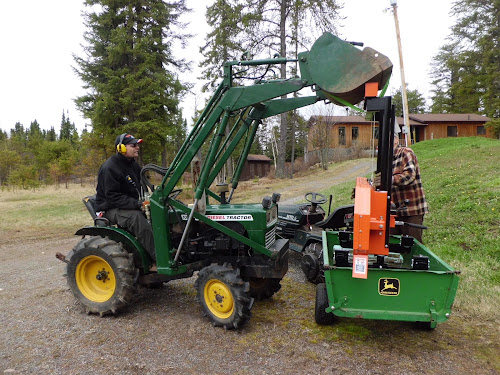 The difficult part started out easily enough – returning to my in-laws driveway, I couldn’t start the tractor – it appeared to be a dead battery. When we went to jump it though, we noticed that the terminal was almost falling off. Some sandpaper and awkward work with a wrench fixed that. She started up a charm, and I strapped the mast of the mill to the bucket. I was JUST able to lift the mast into my father-in-laws wagon, where we strapped it in place and he set off to the mill site. I followed on foot to make sure that nothing shifted in the wagon. His trip went fine, and so I returned to bring my tractor through the bush. This was the first time I had taken my tractor on anything rough. It went uneventfully, but when I arrived at the mill location, it appeared that there wasn’t anything terribly level for me to be able to lift the mill out of the wagon. It took lots of fritzing around to finally have the mill off the wagon, and that’s where the real excitement began! Although I lowered the mast, the tractor was somewhat unstable. As I tried to back up, one of the front tires found a low spot and it caused the back tire to lift up. A very unpleasant feeling! Like, REALLY unpleasant! 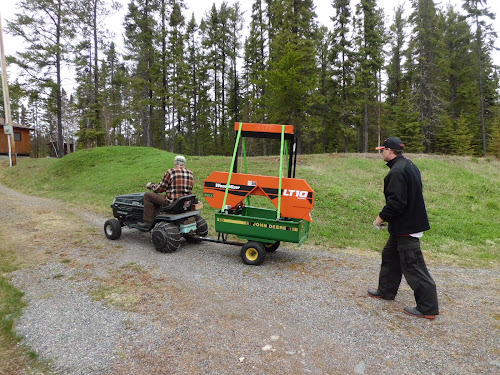 It even happened a second time, more pronounced, I had pretty much had enough of the venture. I was pushing off on a nearby tree, Donna was holding down the back tire, and Grandpa was holding up the front tire. I pulled forward again, we blocked under the tires, and that did the trick. I backed onto some more solid ground, and brought the mast straight to the end of the track. It was a relatively simple matter to slowly lower the mast onto the rails, where it ran nice and smooth. 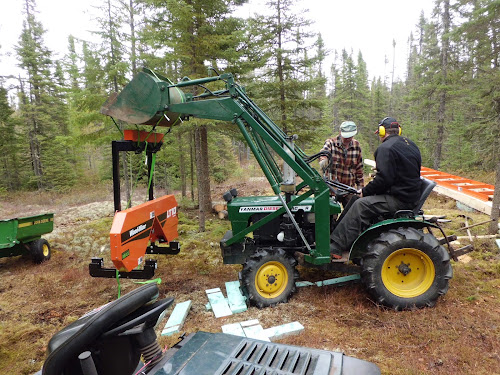 Today was the day to finish up. I installed the gasoline engine, belts, blades and cables. By this time, it was late afternoon, and we decided to wait until tomorrow to do the first test run.

My final chores today were to try to level out the trail in some places. Every little dip and twist on the trail now has me second guessing how stable the tractor is – I know, people mow lawns on tremendous angles with them, but I am still finding my comfort level. 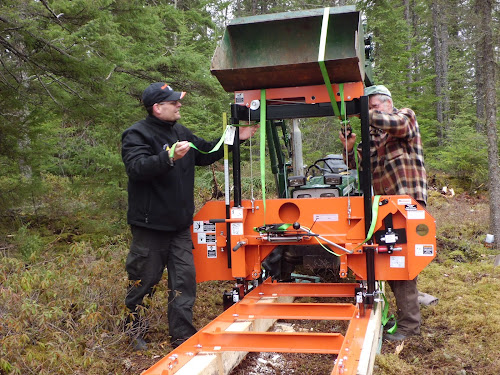 4 thoughts on “Building a Sawmill”