Moving went remarkably smoothly. It basically followed my plan exactly, with one minor hitch – I was profoundly ill during some of the most important parts. I suppose this is where good planning, and great family, pays their dividends.

Saturday, after a wonderful lunch at King’s Buffet with my fellow Aikidoka, I noticed that I was beginning to feel as though something was coming on – scratchy throat, achy back, general malaise.

Sunday morning I thought I had recovered a bit, although I had a bit of a runny nose. Sunday afternoon was suppose to be family dinner, but with my riding the couch the entire afternoon, a pattern was soon to develop.

Monday was moving day! I felt marginally better after a sleep, and managed to direct the driver from Pestell Transport to the proper location right outside our house. My father came by very shortly afterwards, and was amazingly helpful. We managed to get the yurts fully loaded, and had started on some of the basement items, before I succumbed to my condition again, and I ended up taking an hour or two to nap and rebuild some of my resources. Everyone was so understanding and helpful, I can’t possibly express my gratitude enough. I did get back to it, and between my father and I, we managed to load everything in good time. I drove over to my friend’s house to pick up the tractor (he had graciously allowed me to park it at his house for the winter), and there we managed to get it to start on the first try! I drove it right onto the tilt and load truck that had been sent over from Active Frank’s. Back at my house, she started up again on queue, and I was able to drive her right into the back of the trailer, and tucked her in nice and tight against the side, and back of my gear. I called for the trailer to be picked up, emailed my brother and my buddy Brad to tell them they didn’t need to come after work to help out, and collapsed onto the couch for another night. 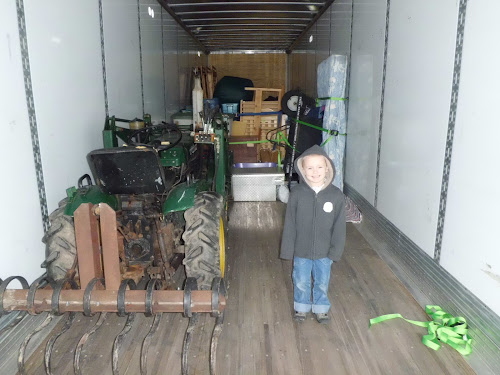 The remainder of the week I don’t really remember, aside from the pattern of waking up feeling marginally better, but more stuffed up, and then feeling completely awful by evening again. On Friday, I dragged myself to the doctor, where they pronounced a strong suspicion of a sinus infection. I received a prescription for antibiotics, and began taking them immediately. Later that afternoon, I met my brother to drive up to Thunder Bay to meet my trailer. He was kind enough to drive the first evening, and even listened to my choice in music and podcasts! We stayed at our usual spot in Sudbury, where we had an uneventful night of watching the Food Network on cable television.

Saturday I took the wheel for a few hours between Wawa and Nipigon, but perhaps I needed more rest, as I definitely felt myself flagging, and my brother complained that my driving was not up to his high standards. The welcome we received at my in-laws cheered me greatly though, between them and my medication, I was feeling much better.

Sunday we began unloading, and had made great progress by the time the driver from Smith and Walter’s arrived to unload the tractor. This time it didn’t quite go as smoothly. The battery went dead, perhaps from me trying to warm the glow plug too much. Then, after he boosted the battery and I managed to start the engine, for some reason, the left rear wheel refused absolutely to turn. We eventually gave up and dragged the tractor off the trailer, and then dragged it down to the ground. An inauspicious beginning! The driver was duly recompensed, and we finished unloading the trailer into my in-laws garage before noon. I hopped back on the tractor, intending to adjust every lever I could find to see if I could learn something about the mystery of the immoveable wheel, except that it worked fine right away. Sigh. I must have bumped something, but it will take more experimentation to find out what. Mmmm, Lappe Mountain Pizza for supper though – that was a nice treat – even if I had lost my sense of taste.

On Monday we flew back south, which ended up a little stressful, as traffic was heavy and we were to meet the tenants to turn over the keys. Our friend Brad, who is also our property manager, managed to delay them until we arrived, which was only momentarily late. We also received a lovely card and blanket from our church, which has already been put to good use by Kenny.

Tuesday we packed the last of our belongings, locked up the house for the last time, said goodbye to the neighbours, and spent the remainder of the day and evening with my parents. Wednesday morning we went out for breakfast at Jack’s Family Restaurant. Fortunately my parents had already booked tickets to come and see us in a few weeks, so the goodbyes were more “see you soon”s, at least, to my mind. By Thursday evening, we were back in Thunder Bay as a family.

The move is finished, and I am mostly back to my normal self (although I still can’t really taste or smell much, and I still have issues with my sinuses.)