I think this is about the sixth time I have attempted to begin this blog entry. It’s notable I suppose because I’m trying to do it entirely on my iPad. I’ll go through my trials and tribulations in a follow-up post. Suffice it to say that, as with anything this dramatically new, the learning curve is rather steep and at times unforgiving. Okay, I just checked. I can actually leave this application and come back where I left off without losing anything! Yeah!

So, last month, a week before we were set to head back up to Thunder Bay to put in our entrance (I have to catch myself from saying “driveway” all the time – the driveway will be another, large undertaking I’m sure…), I started making the necessary telephone calls. My first call was to fulfill the MTO’s requirement for our culvert. 610mm by 9m. Ringing up my prime choice for a culvert, I was put out a bit when they said they were currently sold out, but that I could have one ordered in with their next shipment – in the SPRING! Ack! I quickly had to source out another supplier, and was very fortunate to find someone else who had them in stock, slightly different from my first choice, but still quite useable, and even a bit less expensive to boot!

The next fly in the ointment was that only my first choice of supplier was willing to deliver – now I was on the hook to try to get the culverts to our location on my own. Luckily my father-in-law has a small Mazda pickup, and he was willing to let us use it – we were back in business! I instructed him to get in touch with the fellow who was going to do the actual excavating, and delay him for one more day. I also called the gravel pit down the road and outlined my plans to them. With those three things co-ordinated, things looked pretty good, and we proceeded to hit the road, heading north once again :). Oh yeah, and this time, I was sure to have made reservations at our go-to motel – The Imperial Fireside Inn.

We arrived rather late on Friday evening at my in-laws, enjoying coffee time right away and then off to bed. It was Thanksgiving weekend, so nothing was able to be accomplished until Tuesday morning, when we were able to pick up our culvert(s). 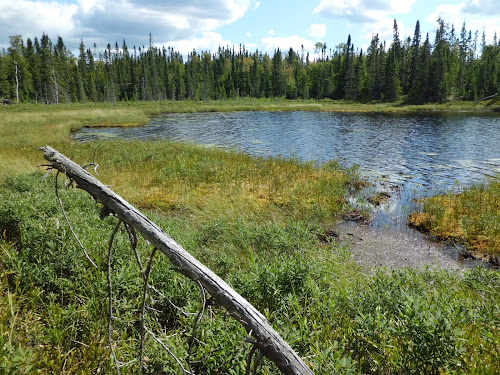 A lovely, relaxing weekend, with lots of wandering around our land to try to get an idea of the lay of the land, and perhaps even dream of some building spots, was had by all. Kenny already declared his favourite spots, as did I.

Tuesday morning came quickly enough, and my father-in-law and I headed off for the 45 minute drive to pick up the culverts. We made a slight wrong turn (or rather, LACK of turn due to the highway having been rerouted recently), but still managed make decent time. We were definitely optimistic in thinking that we could get all three lengths of the culvert on the truck, and mildly reluctantly headed back north with only two sections on the first load. No big deal though, it was a nice day. Kenny was very excited to help us unload and assemble the culvert, but he provided mostly moral support, as they really weren’t children’s toys. It was quite a challenge to get the couplers open enough to slide onto the ends of the culvert, and then bolt the whole assembly together. We did fine, and rolled the culvert neatly into the ditch, just where we planned.

Our excavator was a really pleasant, laid-back fellow who showed up a day early just in case he misremembered our appointment. He showed up in a full size tractor with a bucket and excavator that looked like they had definitely served him well over the years. It didn’t take long before our first load of gravel also arrived. “B” gravel, which is a little too rough for the average person to drive directly on, is a fair bit cheaper than the “A” gravel, so we ordered two loads of that to fill in the ditch and cover the culvert. It wasn’t until he had just begun to level out the final, “A” load that I heard a loud “BANG!” and saw gravel flying up from his machine… I thought perhaps there had been a bottle hidden within the gravel that he had driven over, but actually, one of his rather worn tires had decided to go on to the great road in the sky. Of course, the superstitious amongst us would blame my father-in-law who had pointed out how worn the tires were before any work had begun :).

Work was halted, and our excavator was shuttled home to source out a new tire so he could continue his work.

It wasn’t to be. He was unable to get a tire for a few days, and then it began to rain, which is likely poor weather for someone with a bad back to be slipping around in the mud, trying to change a tractor tire. It ended up with Donna and I spending the last working day of our time there shopping for tractors and solar panels. You see, we are thinking that we will try to put in the remainder of the driveway ourselves. If we actually attempt that, it should make for many stories, all on their own! 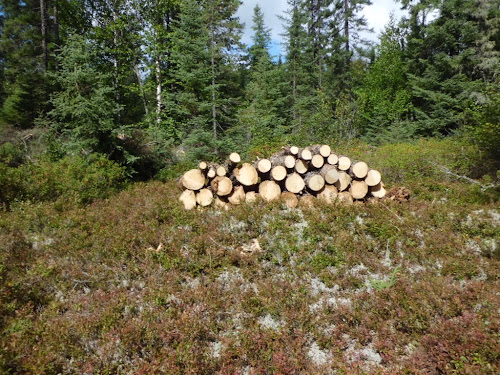 A few days after we arrived home, my in-laws contacted us to tell us that the driveway was finished. My mother-in-law, bless her, managed to compress and send us a number of photos, using her dial-up internet connection, that really whetted our appetite to get back there and see how things are playing out. From what we can see and hear, my father-in-law has certainly been very busy clearing brush and bush for us to follow up with a drive.